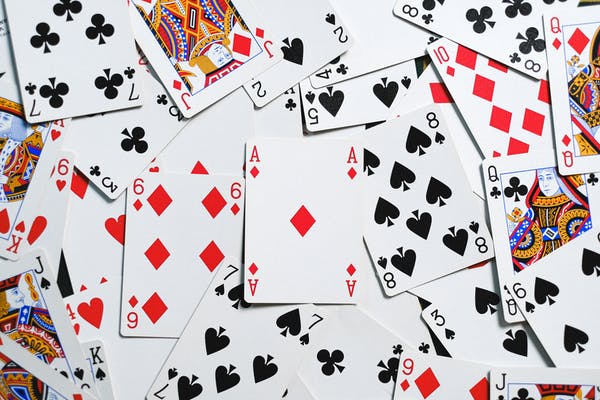 Poker’s been part of the American landscape for decades. When you’ve spent years schlepping across the American landscape on a tour bus, you’ve played a lot of poker. Mostly for nickels and bragging rights – the last thing you want to do is lose tomorrow night’s money before you’ve even seen the venue – and even worse to lose it to your singer and make their ego even bigger than it is already.

Country artists have played on the cowboys and cards imagery from Kenny Rogers’ The Gambler all the way through to Nikki Lane’s Jackpot a couple years back. Willie Nelson’s poker games are legendary; he does the smart thing and plays high stakes when he’s back home in Hawaii.

Poker transcends into pop music – and pop culture – also, though. I don’t know how many Lady Gaga fans could tell you that an eight-high straight beats three aces, but everybody knows what a Poker Face is. Anyway, this is too much rambling and not enough gambling, so here’s a five-card hand of my favorite poker songs.

The Clash – The Card Cheat

In 1970s England they had running battles between the mods and the rockers. When we looked from over the pond, we figured the punks must have won. While Paul Weller and The Jam were playing Snap!, Joe Strummer and The Clash were making London Calling – still hailed as one of the greatest LPs ever made, and still at number 16 on the Rolling Stone Top 500. The ending of the song – where the cheat is ambushed in the midst of a game and shot dead – reminds us why we only play for nickels and quarters on the road.

For a guy who wrote one of the best ever poker songs, Lemmy wasn’t so keen on the physical game. He’d often be seen playing video poker in his beloved Rainbow Room in West Hollywood, but it seems it was the machine more than the game itself. He was famous for touring with a slot machine to be put in his dressing room at each venue (oh, to have a bus big enough for that). Anyway, there’s not much you don’t already know about Ace Of Spades. This version is from Glastonbury 2015 and it still seems incomprehensible that OG drummer Phil ‘Philthy Animal’ Taylor – and Lemmy himself – would both have left us before that year was out. The fact that they’re still not in the Rock & Roll Hall of Fame, and were only nominated in 2020, is nothing short of shameful.

Wu-Tang Clan – Back In The Game

GZA probably isn’t the most associated with poker from the Wu-Tang. That honor goes to Ghostface Killah, who launched his own poker site in 2007 and promoted it via the Pokerface cut from More Fish. Still, the best card rhymes they ever dealt were his verse from this 2001 track. Iron Flag wasn’t received as well as earlier LPs, but Back In The Game makes that return to 36 Chambers. RZA puts down gunfire beats under a Ron Isley lead melody line; GZA, Raekwon, and Method Man spit, interspersed by the kung-fu movie dialog samples of old. That combo was always a winning hand.

Tom Waits – On The Nickel

Unlike the nickels we play for, Tom’s referencing 5th St in Los Angeles. Poker players sometimes call the final card of the five to be dealt ‘fifth street’. I’m not sure they know their poker hand rankings so well in L.A. when he insists “I know a place where a royal flush / Can never beat a pair”, but it doesn’t matter. It’s Tom Waits. It’s that voice. Taken from the 1980 LP, Heartattack and Vine, Rolling Stone had the temerity to describe Waits as “a unique and lovable minor talent”. A year later, he was performing Jersey Girl from that same LP live with Bruce Springsteen. Music critics, huh? Super insightful bunch of guys…

The issue I’ve always had with American country and poker is the songs are always so straight-faced. Desperado by The Eagles? It’s a dirge. Johnny Cash’s cover on American IV manages to be almost funereal. Take those cards to the Canadian prairie and you get this little number, which is bluegrassy, rootsy, jangly, and most importantly – when you’re out in the wilderness – fun. It couldn’t not be when it comes from an LP called Hair in My Eyes Like a Highland Steer. Lund’s one of the new breed of country artists; his American counterparts would be guys like Sturgill Simpson and Jason Isbell. Don’t just take my word for it though; the Canadian Country Music Association bequeathed Hair the title of Album of the Year in 2016.