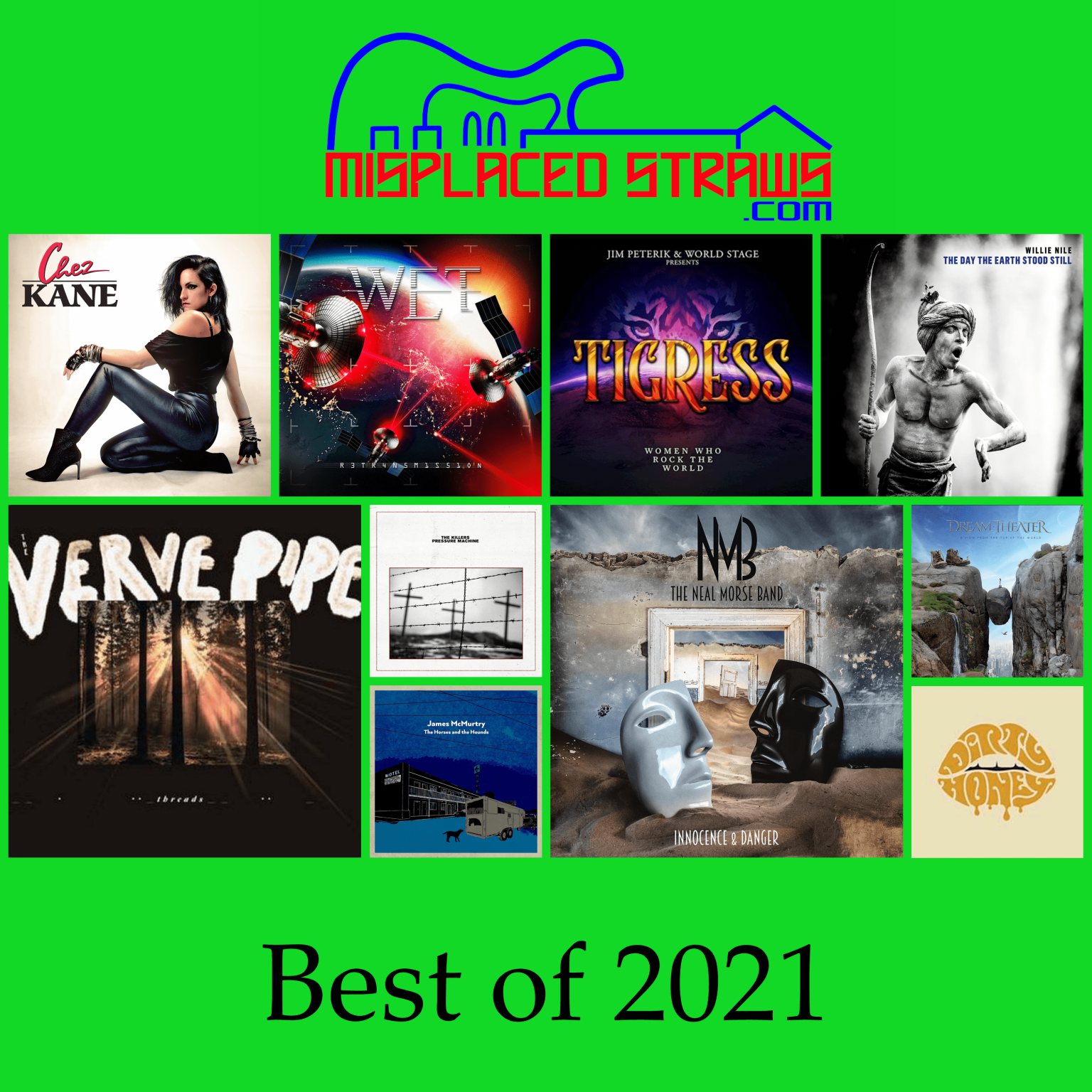 With the pandemic still raging, 2021 presented another somewhat unique year in music. Halfway through the year, we started to see live music make a return, and records that were put on hold during 2020 finally saw the light of day. It has been interesting talking to artists and learning how they all develop new techniques to write and record remotely, and as you can see by the list below, many have been immensely successful creating in this new environment.

Certain artists are geniuses on their own, when you combine five of them it becomes the stuff of legend. Innocence & Danger is the fourth overall album from NMB (formerly the Neal Morse Band) and comes on the heels of two densely brilliant concept records. A two-record set, disc one contains 8 short (by prog standards) unrelated tracks led by the incredible “Do It All Again”. As a collective, NMB has the ability to create these soaring epics that literally stir your soul and allow you to see life in a different light. Their cover of “Bridge Over Troubled Water” is one of the most emotional pieces of music I’ve ever heard. Disc two consists of what these gentlemen do best, the sprawling prog-rock epics of “Not Afraid Pt. 2” and “Beyond The Years”. This is a record that reveals more of itself each time you listen, five voices in perfect synchronicity, it simply doesn’t get much better. Must Listen – Do It All Again

Nearly 30 years of writing, recording and playing have led The Verve Pipe to this record. Threads sees frontman Brian Vander Ark lead his band through a hauntingly beautiful collection of songs that will certainly be the soundtrack for those cold winter nights in front of a fire. Vander Ark, a master songwriter in his own right, teamed with (relative) newcomer Channing Lee to create songs that transcend the history of this band. The title Threads refers to a Japanese legend that everyone is tied together with a red thread. Each song explores how we are tied together even if we feel alone, for the good and the bad. Musically, it moves from lush orchestrations to smoldering guitars to a Simon & Garfunkle feel all while keeping the essence of The Verve Pipe. Must Listen – First Fire of Winter

Once in a great while, a new artist comes that just takes the rock world by storm with their debut, Chez Kane is one of those artists. Her debut is filled with upbeat, 80’s influenced rock tracks written by Crazy Lixx frontman Danny Rexon. Kane’s powerful voice combined with Rexon’s ability to craft a song that sounds reminiscent of a certain time, but never derivative of it, helps create a record that begs to be played loud. This is a record that actually makes you excited to see where this incredibly talented vocalist goes next. She clearly has created a niche for herself and I’m looking forward to seeing how she evolves. Must Listen – Rocket On The Radio

It’s tough to keep finding new ways of praising this band. When Jeff Scott Soto, Erik Martensson, and Rober Sall get together the result is pure melodic rock heaven. The band has grown from simply the sum of its parts into a cohesive entity. Retransmission is filled with Martensson’s memorable hooks and perhaps the best vocal performance in recent memory from the legendary Jeff Scott Soto. The band takes full advantage of the studio to create the 21st Century version of the Wall of Sound on a record that is pretty close to being sonically perfect. Must Listen – Got To Be About Love

The Killers have always been a hard band to categorize. The band slides seamlessly from pop-rock to introspective ballads to Springsteen/Petty-style rock. Pressure Machine sees the band finding a musical style that is the best of all the above combined with Brandon Flowers’ stunning lyrical tales. The record is a series of snapshots of small-town life. While written from Flowers’ perspective of growing up in Utah, it could be life anywhere in America. Tales of prescription drug abuse, suicide, homophobia, and the need to escape, knowing there’s something more out there speak to all of us. There are two versions of this record, the full version, and an abridged version. The full record contains spoken word introductions by the real people Flowers introduces us to in the songs, the abridged omits these introductions. You owe it to yourself and to these people to hear their stories. Must Listen – West Hills

I absolutely love this band. This debut Lp comes on the heels of their 2019 Ep and continues to build a foundation that may very well be the future of rock. Dirty Honey takes the classic rock vibe and propels it into a modern sound. Yes, they have the look and the sound, but more importantly, they have the songs to back it up. Taking the “less is more” approach, they kept the record to a mere 8 songs which means there is no filler. Every track is rock n’ roll perfection. In addition to making a killer record, they are also a monster live band. The future is wide open for this band and I’m so excited to see where it takes them. Must Listen – No Warning

7 – James McMurtry – The Horses and The Hounds

I think the theme of this year’s list is amazing songwriting. There are few better at that craft than James McMurtry. His tenth studio record sees him continue to evolve his gift for storytelling to heights even he hasn’t been to previously. From the opening notes of “Canola Fields” you are drawn into his characters and their lives. The title track is a masterpiece of storytelling and, of course, McMurtry’s take on the current political climate shows in tracks like “Operation Nevermind”. This record is simply James McMurtry at his best. Must Listen – Canola Fields

What else can I say about Willie Nile? The man is a national treasure. More than 40 years into his career and he still puts out strong, thoughtfully written new records. On top of that, he has the best live band on the road today. This is his pandemic record that ranges from songs, like the title track, that perfectly reflects the world today, to plaintive ballads like “The Way of The Heart”, to his trademark humor in “Where There’s a Willie There’s A Way”. While most begin to coast when they hit 70, Willie keeps pushing and creating vibrant new music that begs to be listened to. His duet with Steve Earle, “Blood On Your Hands” is one of the best songs of the year. Must Listen – The Day The Earth Stood Still

You take one of the great songwriters of the last 50 years and combine him with some of the strongest, most incredible female voices of the generation and you come up with Tigress. This is an amazing record full of brand new Jim Peterik anthems sung by women such as Chloe Lowery, Janet Gardner, Cathy Richardson, Kate French, Chez Kane, and many more. These are some of the strongest songs we’ve heard from Jim in a while. It’s as if he was totally reenergized from having these powerful voices bring his songs to life. When possible, Jim also brought in top-notch female musicians like Jennifer Batten, Ashley Reeve, and others on certain tracks. While the different voices and styles could easily have felt disjointed, the thread of Jim’s writing style brings it all together. Must Listen – Prom Night In Pontiac

Dream Theater was always one of my favorite bands. In the years since Six Degrees, it felt like the band began to change and, in my ears, move away from the great songs that were always the core of the band. However, their last record Distance Over Time felt different. While it was certainly an evolution of the sound they had way back when it felt like a return to songwriting. A View From the Top of the World continues the resurgence of this great band. A mix of stand-alone tracks and the epic title track, this record features everything I love about Dream Theater updated for modern times. As they say in the title track, “Bold enough to conquer, brave enough to fail”, the bold, new Dream Theater is certainly here to conquer. Must Listen – Answering The Call

One concept, two distinct records. Nothing like this has ever been done before, and only the combination of Morse/Portnoy/Trewavas/Stolt could have pulled it off successfully.

The Voice of Rock plus one of the most underrated guitarists in the business makes for a killer rock record. Hopefully, the Hughes/Aldrich version of the Daisies will stay together for a while as no one else is putting out hard rock this strong!

Pure sleazy rock n’ roll. Out of the ashes of the not-quite-legendary NYC by way of LA glam punks Star Star comes Scream Idol. This is a fun record that makes you want to crank it up and long for the days of CBGB’s and Max’s.

Steve Hacket released 2 brilliant records in 2021, but it’s his rock record, Surrender of Silence, that ranks as one of the best in his long solo career. From prog to classical to full-out rock, Hackett does it all on this release.

Probably the biggest rock band in the world and they still continue to challenge themselves and evolve their sound. This record took a few spins to unpack, but once it hits you, it becomes one of the best in a long career.

Since taking over vocals in Queensryche, Todd La Torre has established himself as one of the great singers and writers in hard rock. Rejoice brings him back to his metal roots and creates the metal record of the year in the process.

Usually, I’ll skip Best Of’s and similar records on a year-end list, but this one is too good. JSS reworks some of his biggest songs with some of the greatest singers on the planet. This isn’t a placeholder or throwaway, this is a great new record.

If I’m including JSS, then I have to include this. Greenfields is simply a gorgeous record of timeless Bee Gee’s classics expertly reworked by Barry and a collection of country and Americana greats.

In a just world, this record is Number 1 on this list without even thinking twice. It is pretty close to being the perfect, 21st Century rock record. The only problem? The band couldn’t even hold it together long enough for the record to come out. They split up before it even was released. Guitarist and mastermind Trev Lukather will be back soon with a new band, if this record is any indication of what he has in mind it will be amazing!

Noel Gallagher – Back The Way We Came (Best Of)