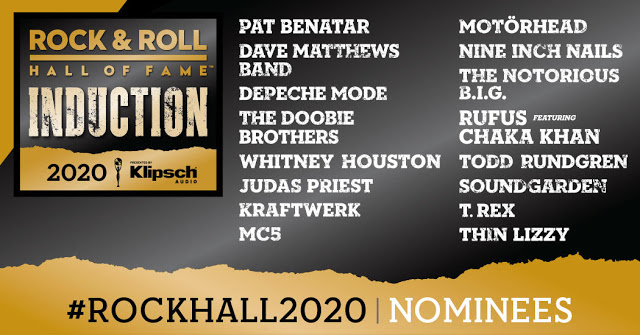 By Jeff GaudiosiOctober 15, 2019Updated:May 24, 2021No Comments4 Mins Read
Share
Facebook Twitter LinkedIn Pinterest Email
Earlier today the Rock & Roll Hall of Fame announced the nominees for induction into the class of 2020.  The 16 names on the list represent a mix of bands that have been previously nominated and first timers.  Although there are always bands that should have been on the list, this is a pretty comprehensive list and marks a definite change in the Hall with the inclusion of multiple hard rock and alternative bands.
The Nominees are:

Pat Benatar – She has been on every list of biggest snubs for years now.  Interesting to note that she is nominated along with her husband/partner Neil Giraldo. This is her first nomination.
Dave Matthews Band – Not my thing, but they did bring jam band culture to the masses.  I don’t see them making it this year but, being a critic’s favorite, they’ll probably make it in at some point.  This is their first nomination.
Depeche Mode – Highly influential, highly successful, still doing their thing.  There’s a strong possibility that The Cure’s induction could open the doors for Depeche.  This is their 3rd nomination (2017, 2018, 2020).
The Doobie Bothers – This will be an interesting case study.  The Hall has long stayed away from the 70’s era arena rock bands like the Doobies, Grand Funk, Foreigner and Styx.  Will their spot on this list mean we will see some similar bands start to pop up in the future?  This is their first nomination.
Whitney Houston – Cannot deny her talent and as the Hall continues to expand the definition of ‘Rock & Roll” artists like Whitney begin to fall under the umbrella.  Janet Jackson challenged the Hall to “induct more women”, this may be her year.  This is her first nomination.
Judas Priest – Long snubbed, should have been in years ago.  Hopefully this will be the year of the Metal God.  This is their second nomination (2018).
Kraftwerk – Another interesting call. A band not known well among the masses but essentially created the synth rock genre.  They probably should be in, but perhaps in a different category.  This is their sixth nomination (2003, 2013, 2015, 2017, 2019, 2020).
MC5 – One huge, world shaking song then a lot of lesser known work that laid the foundation of Punk.  Is that enough to get in? Another band that frequently pops up on the ballot but never gains any traction.  This is their fifth nomination (2003, 2017, 2018, 2019, 2020).
Motorhead – A hard call.  A tremendously influential band with the consummate rock star leader in Lemmy, but never had the commercial success of other metal bands.   Most metal that came after wouldn’t exist if not for the sound and fury of Motorhead.  This is their first nomination.
Nine Inch Nails – Much like Depeche Mode, NIN may be helped out by The Cure getting in.  The band has the success and longevity needed, they are still important on the scene, and Trent Reznor’s speech inducting The Cure last year may have set them up for success.  This is their third nomination (2015, 2016, 2020).
Notorious B.I.G. – Only one record out before he died and one right after.  Not my thing, I guess he’s been influential.  This is his first nomination.
Rufus featuring Chaka Kahn – A successful band with a big name, but there are probably a lot of similar acts from this time period that would never be considered (Kool & the Gang). Perhaps Chaka would have a better shot on her own? This is their fourth nomination (2012, 2018, 2019, 2020).
Todd Rundgren – Todd is the embodiment of the Hall’s Award for Musical Excellence.  He is so much more than his solo career (producer, Utopia).  He deserves to be in, but maybe not in the performer category.  This is his second nomination (2019, 2020).
Soundgarden – The only one of the “Big 3” Seattle bands (Nirvana, Pearl Jam, Soundgarden) not to be inducted yet.  They surly deserve the honor as much as their peers.  It will be bittersweet without Chris Cornell, but this band should be in at some point.  This is their first nomination.
T Rex – Very similar to Roxy Music last year, a band that is much more know in England than here.  Marc Bolan was a glam god who probably deserves his place alongside David Bowie in the Hall.  This is their first nomination.
Thin Lizzy – Again, much bigger in Europe than America but a hugely influential band.  They had the hits, they had the influence, they had the legendary front man.  This is their first nomination.
If I had a vote, my ballot would be:
Pat Benatar
Judas Priest
Motorhead
T Rex
Thin Lizzy
Award for Musical Excellence – Todd Rundgren
Share. Facebook Twitter Tumblr Email