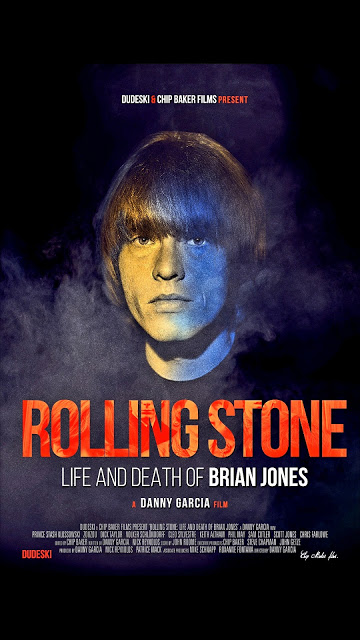 By Jeff GaudiosiApril 5, 2020Updated:May 29, 20211 Comment5 Mins Read
Share
Facebook Twitter LinkedIn Pinterest Email
The Rolling Stones, the world’s greatest rock n’ roll band.  You know their history, but do you know the details behind the story of their founding member, Brian Jones? Filmmaker Danny Garcia, who previously created documentaries on Sid Vicious, The Clash, Johnny Thunders, and Stiv Bators, has taken on the myth of the famed Stones bandleader and, using actual police files and comments from Brian’s friends and family, put together a definitive documentary exploring the brief life and tragic death of this talented man.

Rolling Stone: Life and Death of Brian Jones is Garcia’s new documentary that shed’s light on the life of this monumental talent while presenting evidence that rebuffs the official “death by misadventure” label that has been hung on Brian’s legacy.  Garcia, a Stones fan since childhood, came across the book Up and Down With The Rolling Stones by Tony Sanchez while working on The Rise and Fall of The Clash.  That book and the approaching 50th anniversary of Jones’ death (July 3, 1969) created a spark that led Garcia to investigate the death of Jones and tell his story.
My Interview With Director Danny Garcia
Garcia’s film is truly the story of Brian Jones.  For the most part, the film steers clear of specific Rolling Stones events and concentrates solely on Jones.  Garcia tried to get as many of Jones’ friends, cohorts and relatives as possible.  He even reached out to the remaining original-era Stones, Mick Jagger, Keith Richards, Bill Wyman, and Charlie Watts, but none showed interest in taking part in the project. What the film does have, however, are extensive interviews with his closet friend, Prince Stash (Stanislaus Klossowski), and one of his six illegitimate children, Barbara Marion, among others.  Their stories are used to create a portrait of a complex man.
Most fans know of the musical genius of Brian Jones.  As his daughter, Barbara points out, without his use of alternative instruments, such as the sitar on “Paint It Black”, the dulcimer on “Lady Jane”, and the marimba on “Under My Thumb”, the early sound of The Rolling Stones would be much different.  He was also a fashion trendsetter in 60’s England with his style having an influence throughout popular culture.  Few people, however, realize the sensitive person he also was and that’s where the film excels.  The stories told by Prince Stash show a man that cared deeply for his friends and his music but also for his drugs.
My Interview with Brian’s daughter Barbara Marion
Garcia creates, in his words, “a psychological portrait of Brian” and seeks to find what it was that pushed him to the point of no return.  Garcia speculates that when it came to the two drug busts that Jones was involved in, someone like Keith Richards would have been able to handle the arrests and fallout better than sensitive Brian.  In the film, Brian’s father speaks of how devastated Brian was when then-girlfriend Anita Pallenberg left him for Richards, calling it the turning point of his life.
While the first half of the movie is a somewhat straight-ahead rock documentary, the second half turns into a murder investigation. The official story is that Brian was high and drown in his pool or the infamous “death by misadventure” that is printed on his death certificate.  The film shows, however, that the police never quite took Brian’s death seriously.  The evidence in the film points to a contactor, Scott Thorogood, who was doing work on the property and had financial issues with Brian. it is speculated that Tom Keylock, one of the people that was there on that night and had a relative on the police force helped put a coverup into motion. Garcia and Marion both believe that the British government was more interested in using Brian as a cautionary tale of the dangers of drugs and rock & roll than they were in investigating a possible murder.  The film also spends time with Scott Jones who was the only investigator to gain access to the official police files of the night, and he points out that the files were not complete with some important parts missing still.
Offical Trailor
All of this leaves the legacy of Brian Jones in a complicated place.  The brilliance of his musical legacy must be weighed against his personal legacy.  Brian had six illegitimate children when he died at age 27.  As his daughter, Barbara told me, she did not learn that Jones was her father until 2002 and found that most of her half-siblings have similar stories.  Brian’s parents and sister have not acknowledged any of his children.  Just as the remaining members of the Stones did not respond to inquires when the film was being made, Barbara says that they have also ignored her when she has reached out.
Another unique aspect of this film, like all of Garcia’s documentaries, is the soundtrack.  Garcia reached out to Stones management as well as ABKCO, the company that owns the Jones-era tracks and received no response, therefore no actual Stones music is featured.  Garcia puts together an all-star lineup that creates a soundtrack perfect for the period. Dick Taylor of The Pretty Things and an early member of The Rolling Stones is featured, as is Greg Prevost of Chesterfield Kings, John Perry of The Only Ones and many more.
Whether you’re a fan of the Stones or just enjoy a well done true-crime story, Garcia hits all the marks with this film.  Marion feels that the film is “brilliant” and is the best film about her father. She hopes that it helps people see that he was a “visionary who contributed to Rock & Roll history in a very unique way” and that “This is not just some sad, defeated, deflated, drug-addled rock star who up and died in his pool…he was murdered”.
Share. Facebook Twitter Tumblr Email