When someone asks the question “What is the biggest rock n’ roll band in the world?” the answer has been the same for last 31 years…Guns N’ Roses. Since 1990 the man behind the keyboards has been the one and only Dizzy Reed.  In addition to his time in Guns, Dizzy also did a stint with The Dead Daisies, his own band Hookers N’ Blow, and just released an amazing new solo record Rock N’ Roll Ain’t Easy.  Dizzy was inducted into Rock N’ Roll Hall of Fame with Guns N’ Roses in 2012. 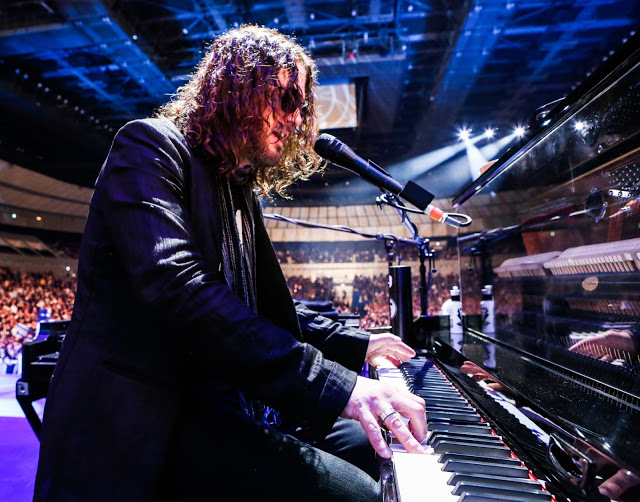 A Hall of Fame inductee deserves his own spin on a segment, so I present a very special 3 questions with…Dizzy Reed:

1 – On this record you collaborate with a lot of people outside Guns, how did the collaboration with Ricky Warwick (Almighty, Black Star Riders) come about? Musically it’s a great pairing.
DR – Del (James) had worked with Ricky on some of the Almighty records, he introduced us back in the early 90s. At that time, the three of us, well, that was a dangerous combination of up to no good, careless and fun but we stayed alive and stayed in touch. When we were compiling material for the record, we needed some heavier tunes to round things out.  Del and Ricky brought in the idea for “This Don’t Look Like Vegas” and I had the idea for “Mystery In Exile”. We sat in the kitchen of the shithole apartment I was staying at in NoHo and hashed those arrangements out with Mike (Dupke, drums) and Mike (Duda, bass). I think we knew right away that “Vegas” would be the first single.
2 – How far back do these songs go? Are these songs you’ve had for years or were they written specifically for this project?
DR – A few go pretty far back as raw ideas anyways. The two aforementioned and the title track were put together specifically for this record at the time but most of the material came from demos that I’d thrown together over the previous 5 years or so.
3 – What were your musical inspirations? I hear a lot of NY bands like the Dolls and D Generation in the sound as well as English bands like Mott the Hoople and LA bands.
DR – I absorbed all of that along the way and while growing up but I think Del, Richard (Fortus, guitar) and certainly, Todd Youth (guitar), helped infuse the New York vibe in to the record even more. My noggin is packed full of 70’s English rock- The Stones, The Who, The Kinks, Bad Co. and for sure English glam rock like TRex, Elton John, David Bowie as well as Mott the Hoople. All the American 70’s stuff is in there too, especially the Southern rock and LA Westcoast. I’m like a sponge. Living through the 80’s in LA no doubt played a part but, man, I’ve had the kick ass opportunity to work in and out of the studio with Guns ‘n Roses for the last 28 years. That’s been the biggest inspiration for sure.