Jimmy Page, John Sykes, Joel Hoekstra, Kenny Wayne Shepherd. What do all of these legendary guitarists have in common? A great bass player, Tony Franklin, the Fretless Monster!  Whether he’s part of a band (Page’s The Firm, Blue Murder with Sykes) or as the best hired gun in the business (Hoekstra, KWS and a million others) no one brings the feel, style or look like Tony Franklin.  Tony is one of the most in-demand session musicians as well as a top stage performer.  It is a true pleasure to present: 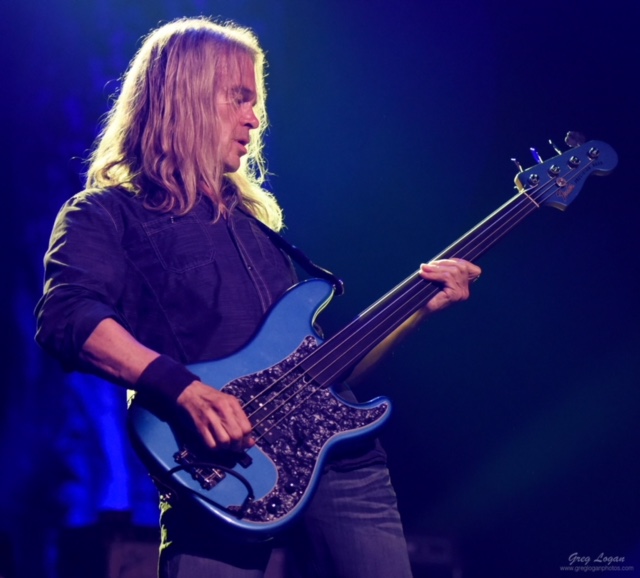 3 questions with…TONY FRANKLIN
1 – Who is your single biggest musical influence?
TF – I have many musical influences – among them are Jaco Pastorius, James Jamerson, Jimmy Page, Roy Harper, Stevie Wonder, my parents. If I had to name just one, it would probably be Queen.
2 – What is the most important (not necessarily best or favorite) song you have ever written or recorded and why?
TF – My favorite song of mine is called Watching The Story. It appeared on a solo album called Wonderland that was released in Japan in 2002. I love what it is about – maintaining a peaceful heart and mind while the craziness of life’s crazy story unfolds around us. The song pretty much wrote itself. I will re-record the song for future release.
My other favorite song – for different reasons – is Dreaming, which appeared on the Firm’s 1986 Mean Business album. While the lyrics are somewhat obscure (but deeply meaningful to me), musically it was adventurous and cohesive, fusing time signature changes, and an alternative open tuning. And to have Jimmy Page, Paul Rodgers and Chris Slade record the song was beyond exciting. I demoed the song on a 4 track cassette recorder, on headphones. It was a magic moment for me.
3- What drew you to the fretless bass?
TF – I was drawn to the Fretless bass after hearing Jaco Pastorius in the late 70’s. The sound really captivated me. I made it my main instrument in 1984, after modifying a stock Fender Fretless Precision Bass – adding the extra Bridge pick up and a three way selector switch. I love the tone and expressiveness of the Fretless. Not often used in rock music, I’ve found that it translates perfectly, adding extra depth and nuances not usually heard from a traditional Fretted bass. In 2006 Fender released the Tony Franklin Fretless Precision Bass, which was an incredible honor. The bass is still in production.