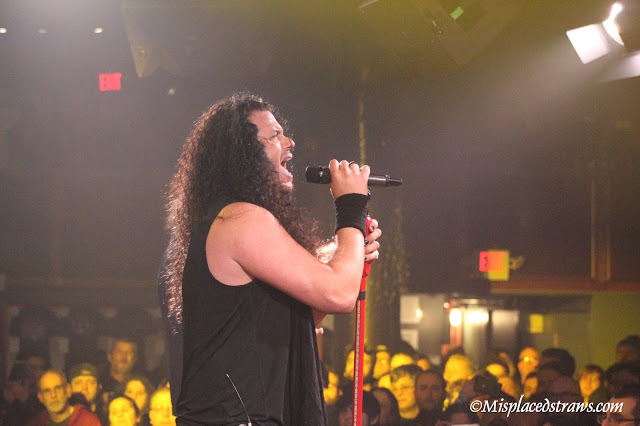 Musicians and the CoronaVirus, A Case Study with Jeff Scott Soto

By Jeff GaudiosiMarch 24, 2020Updated:May 24, 2021No Comments5 Mins Read
Share
Facebook Twitter LinkedIn Pinterest Email
You don’t need me to tell you that we’re living in unprecedented times.  Due to the coronavirus, most of us are quarantined at home.  Some of us, like myself, are lucky enough to have a day job that continues to pay our salary while we work from home.  However, many people are unable to work and are losing that paycheck.  With venues closed and touring canceled, musicians fall squarely in that latter group.  I spent some time on the phone recently with Sons of Apollo vocalist Jeff Scott Soto talking about how this global crisis is affecting musicians of all levels as well as the essay he posted on his social media.  As you may remember, Sons of Apollo were among the first bands to cancel tour dates due to the virus.  While this story is specific to them, it illustrates what nearly every other band that was out on the road went through.

Jeff was quick to point out that he and his family are all healthy and taking the threat very seriously.  A lot goes into the decision to ultimately cancel a tour.  While the health and safety of band, crew, and fans have to be of paramount importance, there are also major financial impacts that have to be weighed.  One thing that has to be remembered is that musicians, regardless of popularity and sales, are still people working a job.  They have the same bills to pay as their fans. Whether you live in a mansion or a modest apartment, it still comes with costs that need to be paid.  So, when a tour gets canceled, whether by the band, venue or promoter, the main income stream these artists have to pay their bills comes to an end.
I spoke with Jeff about how Sons of Apollo made their decision.  He mentioned that the band knew at the start of the European tour that there was a strong possibility of cancellation.  There are a number of ways bands tour.  There are “fly-in” dates where the band literally flies into a city, plays their show and flies out to the next date.  That usually happens when cities are far apart or when dates are spread out.  These types of dates don’t require a band to rent a tour bus, hire a full crew and incur expenses that they will not be able to recoup should the tour be canceled.   Another type is the typical tour bus trek from venue to venue that does require a commitment of non-refundable money.  In the case of Sons of Apollo, the first few European dates were the former, fly-in dates that didn’t require the band to make a large financial commitment.  However, the remaining dates through Switzerland, Italy, Spain, France, and England fell squarely in the latter category.  If the band began that run of shows and it was ultimately canceled they would be on the hook financially to pay all of the expenses for the remaining shows. 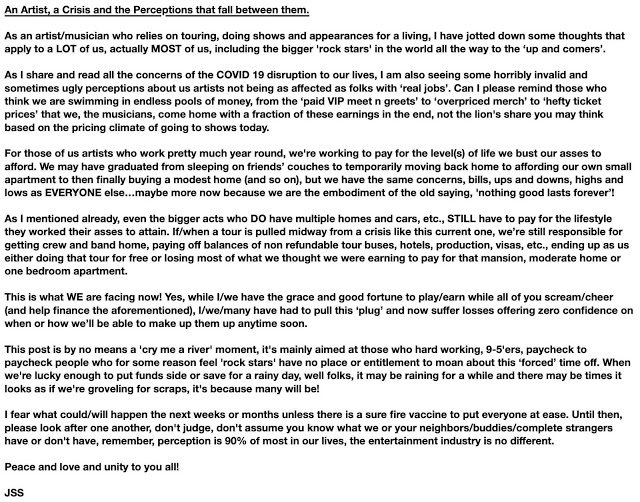 Soto talked about how it was a band decision, votes were taken leading up to the ultimate cancellation.  He mentioned that the first sign was when the venue in Milan, Italy said it may have to cancel the show, which was followed by the venue in France saying the same.  Once a band is committed financially, it can’t pick and choose which shows to play, all shows have to be played in the routing order for the band to have a chance at breaking even financially.  Therefore, once the prospect looms of multiple shows being canceled, the band has little choice but to cancel the tour before it begins and the expenses are incurred.
In hindsight, Sons of Apollo made the absolute correct choice.  The coronavirus invaded every country where they would have played so starting the tour and committing financially could have ruined the band.  Of course, they were not the only band dealing with a major tour being impacted.  There were a number of tours, such as the KISS farewell tour, that were well underway with expenses already incurred,  forced to close costing the bands and industry millions.
A number of artists are doing various types of web performances.  Some charge for access to these shows, others don’t.  Soto has a practical approach to these shows.  He realizes that many fans are also out of work due to the virus and may not be able to purchase a virtual ticket to such a show.  He has taken the position of using a “tip jar” which will allow fans to contribute whatever they can if they are able.  For those who are not able to donate, they can still enjoy the performance. 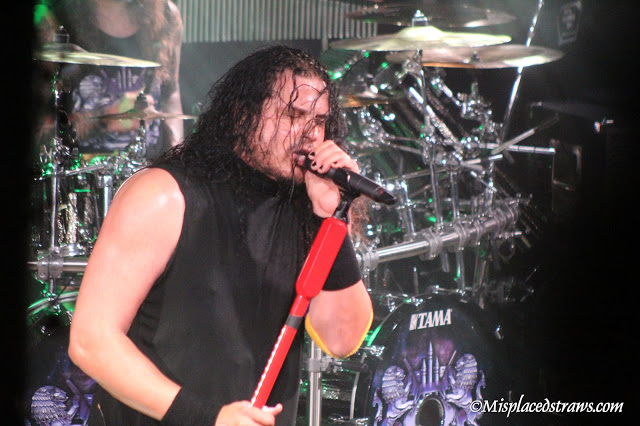 If there is an upside to the coronavirus quarantine, it’s that more time is allowed for artists to create.  Soto has a solo record due later this year and is also writing and recording for future projects.  The time off gives him time to rest his voice, relax a bit, and give a strong performance.
Soon after Sons of Apollo made their decision many other bands canceled upcoming tours while Live Nation and AEG suspended all touring for bands under their umbrella.  Who knows when we’ll see live music again, until then, if you are financially able, please support your favorite artists by purchasing physical product or web shows. We are all equal when it comes to the impact of this worldwide pandemic.
Share. Facebook Twitter Tumblr Email