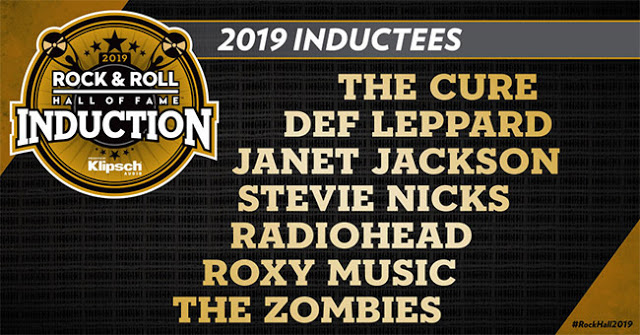 By Jeff GaudiosiDecember 13, 2018Updated:May 24, 2021No Comments3 Mins Read
Share
Facebook Twitter LinkedIn Pinterest Email
Earlier today the Rock& Roll Hall of Fame announced the members of the Class of 2019.  Here, we’ll take a look at each of them and provide some insight and, of course, opinion.  First, the inductees…joining the Hall on March 29, 2019 will be:

First impressions are that this is a strong class and a uniquely diverse class both musically and generationally.  It’s a class that covers a wide swath of time, The Zombies first formed in 1961 while Radiohead released their debut single in 1992.
The Cure – First year of eligibility was back in 2004 as their debut record was released in 1979.  They were also nominated in 2012.  The Cure should have been in years ago as they were one of the bands that brought goth and alternative music to the masses.  Their look and music influenced so many bands that came after. They are still going strong, selling out concerts and making great music 40 years into their career.  For me, Disintegration is a “desert island” record and one of my top 10 favorites.
Def Leppard – Eligible since 2005, the band scored it’s first nomination this year and proceeded to set a record for most votes ever on the Fan ballot.  There isn’t much left to say (see my list of Rock Hall Snubs) as it’s about time they were inducted. I will give kudos to the Hall for inducting all members of the band including Pete Willis, Steve Clarke and Vivian Campbell.
Janet Jackson – She has been eligible since 2008 and also nominated in 2016 & 2017.  She’s the only inductee that stirs the “what is rock & roll” debate this year.  I think we all have to start subscribing to the idea that Rock & Roll is an umbrella term with a lot of sub-genres, pop music being one of them.  Under that thinking, the string of hits Janet has had cannot be denied.
Stevie Nicks – Her eligibility as a solo artist goes back to 2007 but this is her first solo nomination.  Stevie becomes the first woman ever inducted twice (Fleetwood Mac was inducted in 1988).  Recognition of her as a solo artist is long overdue.  Her style and music has become part of our culture and she was snubbed for far too long.
Radiohead – Eligible since 2018 and this is their second nomination.  I’ll just say it…I don’t get them.  the first three records were listenable but since then I haven’t been able to get through one.  They are critics darlings though, we’ll see if they are too cool show up or not.
Roxy Music – First became eligible way back in 1998 but this was their first nomination.  They may not be a household name, but their influence is legendary. Contemporaries of David Bowie, Roxy championed the Art Rock period that led to many of the New Wave/New Romantic groups of the 80’s.  Seeing them play live (hopefully with Brian Eno) will certainly be a highlight of the ceremony.
The Zombies – Eligible since 1990, this was their fourth nomination (2014, 2017,2018, 2019).  The Zombies finally getting inducted is huge, not only did they have a handful of massive hits, but it signifies the end of an era.  This induction really closes the door on the British Invasion bands.  The Zombies were only around (originally) for a few years but their songs and use of a keyboard as a featured instrument set the template for bands like Tom Petty & the Heartbreakers.
Share. Facebook Twitter Tumblr Email