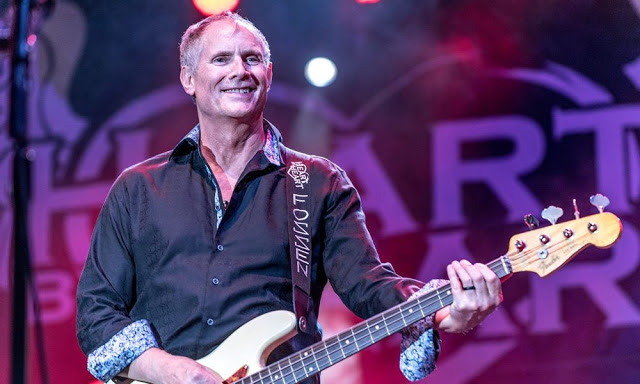 By Jeff GaudiosiNovember 8, 2018Updated:May 29, 2021No Comments4 Mins Read
Share
Facebook Twitter LinkedIn Pinterest Email
Certain bands transcend the era they recorded in and become a permanent part of our musical landscape.  Heart is certainly one of those bands.  Songs like Magic Man and Barracuda are iconic and still staples of rock radio around the world.  Bassist Steve Fossen was an original member of Heart and responsible for the bass lines on everything from 1975’s debut Dreamboat Annie through 1982’s Private Audition. I had the opportunity to spend some time with Steve and discuss his entire career.
Please enjoy the Misplaced Straws Conversation with Steve Fossen below:
On the involvement of former Heart members in his current project Heart by Heart: Of course we’d love to play with Howard Leese.  When we first got this band together we invited Roger Fisher…but he declined. 5:20
On the 2013 Rock & Roll Hall of Fame induction: Ann & Nancy made the decision…they invited us to play on Crazy on You.  They invited their current band…to play Barracuda. In my opinion, maybe not the wisest decision on their part. I think it would have been a much more enjoyable version of Barracuda (with the original band).7:15
We got together a couple days before and had a rehearsal…The first time we played it together, that could have been the show too because it was flawless. Every time we played it was flawless.  8:40
It felt very good and natural.  I’m very surprised that Ann & Nancy wouldn’t want to put that lineup together for a tour. It would be great for the fans I think.  9:20
On the reunion happening again – Don’t hold your breath. 10:10
On writing Magic Man – Magic Man was very raw. I came up with the rhythmic basis, the chunky rhythmic basis for the song. I came up with a lot of the parts that are underneath the lead guitar parts and the Moog solo.13.10
On band dynamics in the early days – Roger (Fisher) and Nancy were a couple and Ann and Mike (Fisher), who was Roger’s older brother, were a couple.  Their collaboration was a core of the beginnings of the Dreamboat Annie era. By the time Dog & Butterfly started recording some cracks started appearing in the relationships between the two ladies and the two men. 14:00
On the results of the breakup of the relationships – Roger was very erratic in the studio, it was hard to get anything done in the Bebe Le Strange era. 15:00
Anytime you screw up something good like that you have no one to blame but yourself and it’s hard to deal with. 15:50
After Nancy had broken up with Roger she went straight to Mike Desrosiers. Just before the Private Audition sessions Mike Desrosiers and Nancy had a parting of the ways. 17:00
On his departure from Heart – During the recording of Private Audition, Mike and I were not that into the direction that was being laid out. 17:50
We weren’t that happy with it and they could tell we weren’t so we had a parting of the ways there. Over the years, from our royalty statements, I think we were right. The album speaks for itself, it’s the very lowest on the totem pole of all the efforts we did together. 18:20

On the demise of post-Heart band Alias – That wouldn’t be the first band in history that the record company made a mistake on. 21:10
On the rise of grunge in Seattle –  I was super plugged into the scene in downtown Seattle. I saw Pearl Jam in a club in downtown  Seattle…I was on stage with Soundgarden, watching in the wings at a theater here in Seattle, and Alice in Chains, all that. It was a fantastic time to be in Seattle.  21:50
On the legacy of Heart – There probably isn’t a second on Earth that a Heart song isn’t being played somewhere. 26:00
On what fans can expect from Heart by Heart – People want to hear the hits, they want to hear the hits played like they were created, like they were conceived, like they were recorded so that it brings back all the memories. 17:30