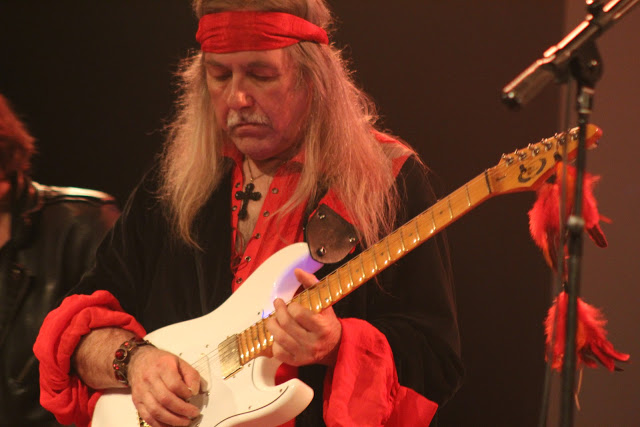 By Jeff GaudiosiApril 22, 2019Updated:May 24, 2021No Comments4 Mins Read
Share
Facebook Twitter LinkedIn Pinterest Email
On Easter night, guitar maestro Uli Jon Roth brought his 2019 Triple Anniversary North American Tour into Hartford, CT.  I spoke with Uli earlier in the tour and he explained the Triple Anniversary – 2018-19 marks the 50th anniversary of his first concert and the 40th anniversaries of both the Scorpions Tokyo Tapes and Earthquake, the first release under the Electric Sun moniker.
The evening was a glorious 3-hour celebration of all three of those anniversaries.  The show is broken into two sets, the first set is predominately made up of songs from the three Electric Sun records.  Many of these songs haven’t been played live in decades.  The second set was mostly songs from Roth’s time in the Scorpions. The musicianship was flawless, Roth on guitar and vocals is flanked by two guitarists, one who also handled the majority of lead vocals, as well as bass, drums and keys.

Being Easter night, the crowd was relatively sparse but certainly excitable at times.  The songs in the Electric Sun set may not have been as well known but each was introduced and explained by Uli.  Most songs received a standing ovation after Roth’s guitar pyrotechnics. While his band are truly exceptional musicians, they didn’t show much stage presence or personality in this set.  There was a lot of dead air in between songs as Uli was the only one on stage to address the crowd.  There were some strong highlights in this set, “Why?” from the Beyond The Astral Skies release drew a huge ovation as did “Don’t Tell The Wind”,  a poignant tribute to his late brother Zeno.  the set ended with an incredible version of  the epic “Enola Gay (Hiroshima Today?)” off of 1981’s Fire Wind.  Using his trademark Sky Guitar, Roth reenacted the historic attack with tremolo work that needs to be seen to be believed.

Set 2 began with Roth seated and playing a stunning 8 string custom Sky Guitar for a piece called “Passage to India” during which he wove in melody lines from “Bohemian Rhapsody”.  In a nod to the 50th anniversary of his first concert, he brought out the actual guitar he used that night for a song that was played in his first concert, a cover of “Apache” from The Shadows.  There were no real surprises in song choice, these are the tracks Roth usually adds into his set, but they are songs that can’t be heard anywhere else as the Scorpions have long since abandoned many of them.  The band came alive during the Scorpions set.  The songs were played with a higher energy level which certainly translated to the crowd.  These were the tracks the crowd was waiting for and they erupted with each selection.  In addition to the Scorpions material, Roth added a nod to his inspiration with his fiery take on the Hendrix version of  Dylan’s “All Along the Watchtower”.

While the musicianship was second to none, the mood was subdued a bit by the lack of energy on the stage.  An opportunity to make this a true anniversary celebration was missed by not showing any archival material during the songs on the giant screen behind the band.  There were some brief clips of a young Uli in action on the screen during “Enola Gay” but a true sense of this amazing guitarist’s history could have been realized by utilizing the screen a bit more.  Perhaps a few video clips in between songs could also have filled some of the dead air.  All in all, this was a night to celebrate the music of a truly underrated guitarist, songwriter and vocalist and it did just that.  Be sure to catch Uli as the tour winds through the US until mid-May then hits Europe for the rest of the year.