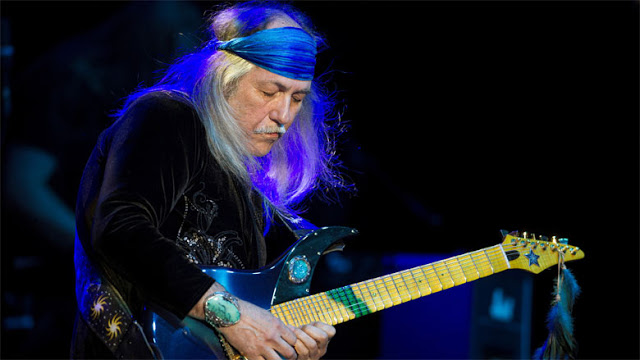 By Jeff GaudiosiApril 4, 2019Updated:May 29, 2021No Comments5 Mins Read
Share
Facebook Twitter LinkedIn Pinterest Email
Fifty years is a long time to do anything, especially to be a rock guitar God.  Uli Jon Roth was a teen when he first helped form the Scorpions and created some of that band’s most legendary output, including albums like In Trance, Virgin Killer and Tokyo Tapes.  He has gone on to a successful solo career and is currently on a long awaited North American tour.  In our chat Uli talks about his five decades in music, how the Scorpions got their start, his varied solo career, Michael & Rudolph Schenker, the Rock & Roll Hall of Fame, the dogs in the park and so much more.
Please press Play below and listen to my Conversation With Uli Jon Roth:
On his current tour – We call this the “Triple Anniversary Tour”. We celebrate the 40th Anniversary of Tokyo Tapes…(and of) my band Electric Sun and in December of 1968 when I played my first show as a teenager of 13.1:20
We’re playing a long, combined show, it’s like a 3 hour show. It represents my 50 years in music and some of my best work 3:00
It includes early Scorpions stuff, a nice cross section through Electric Sun which we really haven’t played for 40 years. 3:50
On joining the Scorpions – Rudolph called me and said “Michael has just left the band and we have one more show” could I take Michael’s place and I said “yes”. 5:30
(Rudolph) effectively joined my band Dawn Road but Scorpions had a record deal they were already a professional band we were more like high school amateurs so it was a no brainer, we called it Scorpions. Then we got Klaus Meine back into the fold. 6:25
On Electric Sun – I wanted to be free to explore to my heart’s content without having to think in terms of “commerciality” 8:10
Had I put the commercial success before my artistic thinking I would have stayed in the Scorpions. 9:00
On 80’s shred guitar players – I was aware of it but I wasn’t influenced by it…they were influenced by me. 10:10
A lot of these players ended up being like typewriters. 10:30
When I did my shredding it was always melodic and musically logical. 10:50
On Beyond The Astral Skies – It’s by far my favorite Electric Sun album. 11:50

On the Sky Guitar – It came about in the early 80’s as a result of my desire to play higher on the neck than was possible on a normal, traditional electric guitar. 13:20
On the thought of retirement – I will retire when I can’t walk or talk anymore…It’s the most unlikely scenario you could put in front of me. 16:20
On playing with the Scorpions again – There was a period when we did it quite frequently from 2005-2011…there was one show in Tokyo a few years back that was more accidental, I happened to be there and they happened to be there…Rudolph was on my stage just recently in Japan. 18:40
As for playing with the Scorpions live (in the future), I don’t know, they have their agenda and guests don’t really fit into it. 19:55
On the tension between Rudolph and Michael Schenker – It’s coming from Michael’s side, Rudolph doesn’t bare any grudges, Rudolph is the coolest guy you could imagine.  Virtually all of what Michael says doesn’t make any sense to me regarding that, I just don’t understand it…I think Michael is talking about a different person. 20:00
I wouldn’t talk about anyone like (Michael talks about Rudolph)…it’s not very becoming…I don’t think Rudolph deserves it.
Michael is one of the greatest guitar players that the world has ever seen…but this other thing is something that leaves me dumbfounded and pretty speechless…It’s not doing Michael any good to be seen as someone talking bad about his brother.
On the Rock & Roll Hall of Fame – I’ve not given it any thought…I don’t understand why they’re (the Scorpions) not in it. 24:00