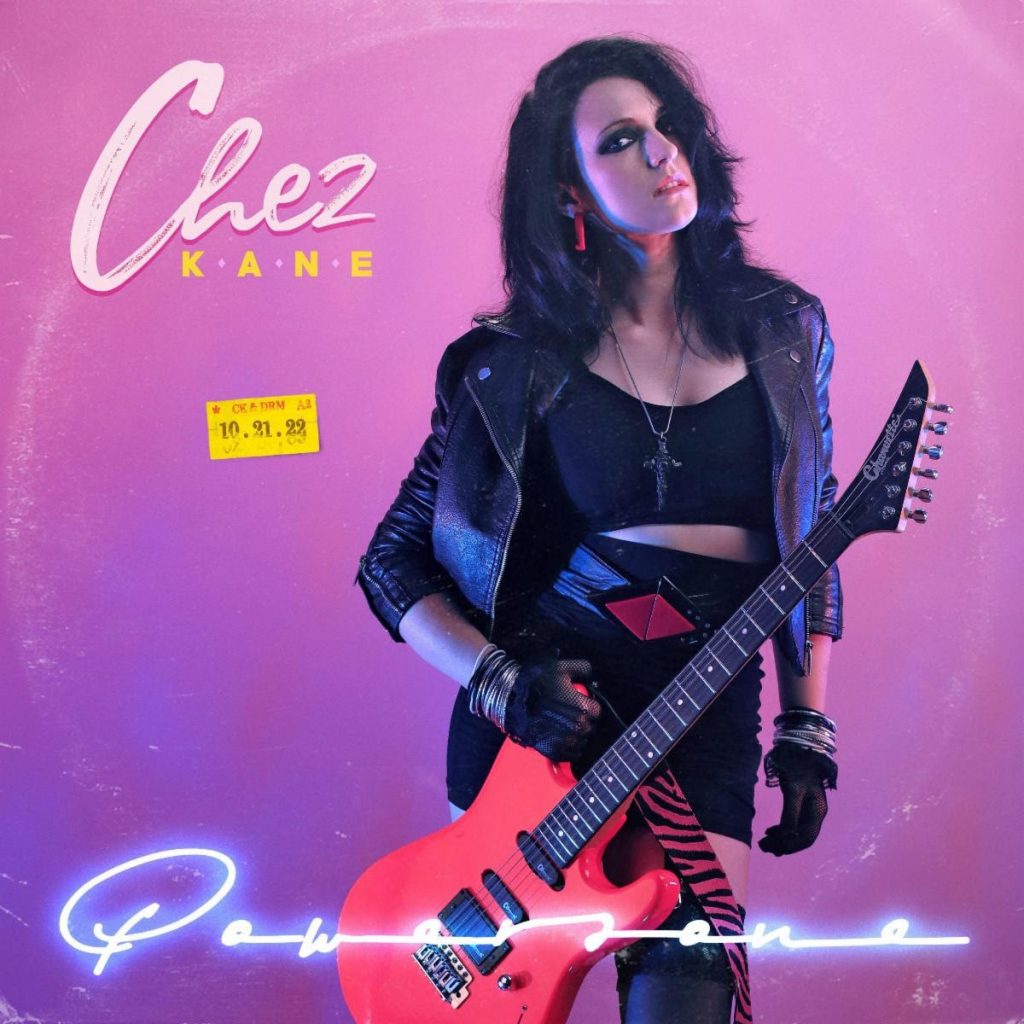 Chez Kane was one of the biggest breakout stars of 2021. Her self-titled debut took the rock world by storm, introduced us all to an amazing talent, and landed her a New Music Showcase on this site.. She’s back, along with collaborator Danny Rexon (Crazy Lixx), with her follow-up Powerzone which showcases more of her killer voice and Rexon’s 80s-tinged songs.

On if she was prepared for the success of her debut – Not at all. So when we started doing the first album, obviously, when you’re putting that new stuff, you never know how it’s gonna go down, you don’t know what people’s opinions are gonna be or anything. I didn’t really prepare myself, I just wanted to put music out and see how it went and it went down really well, so I’m so pleased, as you can imagine. :52

On if the process of creating Powerzone with Danny Rexon was similar to the debut – I think that it was slightly different this time. Obviously, when we did the first album, Danny was looking for a female singer, so we hadn’t actually met before the project took off. He found me through YouTube and contacted me to ask me to demo some songs that he already had ready to go. Obviously, some of the songs were written for Crazy Lixx that didn’t get used for Crazy Lixx and stuff like that. So moving on to the second album now, I feel like we’re growing together as a working duo because he’s writing more specifically for me now, so I feel like the music is coming on. Yeah, it just feels a little bit different this time, but we’re still going in the same vein if that makes sense. 1:36

On the sounds and influences on Powerzone – Well, to be honest, I think it’s a bit of a mix. So obviously, Danny knows what I’m influenced by, and he’s very strongly influenced by this kind of style of music, I didn’t have anything to do with the writing process, again, I didn’t write anything on the first album either. I did have the option to, I gave it a go, but to be completely honest with you, he’s so perfect at writing this style of music that I didn’t wanna touch it. I was like, “You write the songs, I’m happy to sing them”. So yeah, I feel like the influences are definitely coming across, but how Danny writes the songs, I don’t know, because I’m not there. I don’t know how he does it. He’s just very, very good at it. 3:06

On finally being able to perform live – As you can imagine, it was very frustrating with the first album, because I can get out and promote it straight away because we were all locked out under the pandemic. The second I got a chance to do a gig, I had all this energy built up in me, I was ready to pounce on that stage, so it’s been pretty special to be able to play shows, I still haven’t played as many shows as I would have liked. I have my first headline tour coming up a week after the second album release, so I’m very excited about that…So I have a few shows where I’m going to Belgium as well, and I’m heading into Norway, Sweden, Spain, and then I am coming over to the US for the Monsters of Rock Cruise. I’ll be heading over for the first time, and I’m hoping that’s going be the start of coming up there more. It’s on the bucket list. So yeah, I hope so. I really hope so. 4:09

On getting used to playing with her touring band – I’ve got some guys in the UK at the moment, but if I have to travel abroad and stuff, the lineup may change here and there, I’m not sure it depends on what will work out when I’m traveling. But the guys that I have right now, we’re doing an absolutely fantastic job, they’ve taken all the songs on board, they’ve dissected these songs and they wanna perform them just as well as I want them to perform them. They’ve been really, really great guys, and I’m looking forward to heading out on the road with them because they’ve definitely put the groundwork in. 5:48

On working with Jim Peterik – I still feel like that was a dream, that was something that happened so fast. I had just done the first album and then Frontiers emailed me and said that Jim was interested in having me on his album. I was like, “Are you joking?” I mean, come on, this guy wrote “Eye of the Tiger”. It just came about that way. Obviously, I said yes, and then we were kind of doing what me and Danny do, he was sending the track over, asking me if I liked it, and then he just let me free and let me record it the way I wanted to record it. I sent it to him, and he was really pleased, and then it went on his album. Yeah, that just feels like a big dream, it went so fast. 6:51

On if it felt ok working with someone other than Danny – Oh yeah, I love a challenge. Working with anybody is always different and you get different feels and different working relationships. Danny and I have a really good working relationship, which has grown to become a really good friendship. I’ve done a few projects since and it’s always nice to change it up, so I do enjoy doing a project with other people as well. 7:52

On if she’s had time to appreciate her success – It feels like a bit of a whirlwind. It’s like I’ve had some write-ups in some pretty big magazines recently, and I’m just like, “What?” It just hits me out of the blue, because obviously I’m quite busy a lot at the time, and I’m recording or doing photo shoots, video shoots, trying to prepare for my tour. I don’t get five minutes to sit down and process it, so when people are sending me, “Look, you’re in this magazine”, I’m just like, “What?” It’s pretty crazy, I don’t believe half of what’s going on sometimes. 8:56

On her involvement with her videos – When we do the videos, I fly over to Sweden because Danny kind of comes up with the idea and the concept, and then there’s people out there that he works with, so I easily over to Sweden. He comes up with a concept with me, so he’ll talk to me about it before I end up flying over there, we obviously figure out what I’m wearing, stuff like that, and then when I get there, sometimes things change up because we haven’t been in the same room doing it, so when we get there together, sometimes it doesn’t work out the way we’ve planned. Everything that he puts forward, I’m always comfortable with how it goes, if I’m not comfortable with something, then it won’t happen. We have a really good communication and the relationship for the videos. I’m really pleased with how everything’s going. We have a blast, honestly. 9:50

On if she’s having fun – If I wasn’t having fun, I don’t think that I could do what I’m doing. There are a lot of hard times in music, and it’s not easy to get further forward these days. I think there’s so much competition out there that you’ve just got to enjoy it and embrace it. I love singing, that’s what I’m here for, and I’m loving trying all these new things and making all these videos, and then seeing the end results. It’s a pretty special feeling. 10:57

On Pat Benatar going into the Rock & Roll Hall of Fame – It’s crazy, I can believe she’s not already there. Pat Benatar was actually the first female rocker that I got to know. So my sister was very into Pat Benatar and I was into Def Leppard, so I was listening to Def Leppard all the time, and she would have Pat Benatar blasting. She’s my first love of the female rocker side of the 80s, so it’s pretty amazing. And FINALLY, that’s all we can say. 11:58