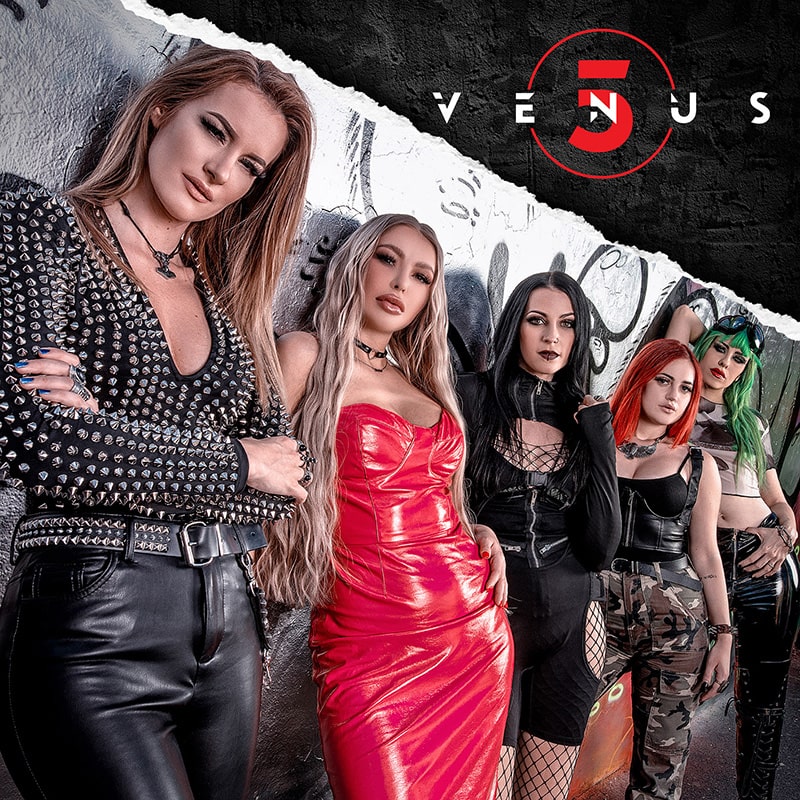 A Conversation With Karmen Kinc and Erina Seitllari of Venus 5

For decades, the pop world has been dominated by vocal bands assembled by their record company. For the first time, Frontiers Records brings this idea to the world of metal. They have brought together 5 of the top female singers in the world along with top producer Aldo Lonobile and a great team of writers and musicians and created Venus 5. Vocalists Karmen Klinc and Erina Seitllari recently took the time to talk about how this unique band came together.

On how they became part of Venus 5 – Karmen – Well, I got an email actually from Mario deRiso asking me if I wanted to try something new. I don’t actually know how they found me, the label, probably through YouTube or Facebook, Instagram. I think I also got the messages there on Facebook and Instagram but I didn’t see them because, on a daily basis, I get so many that I just somehow missed it. I thought it was a good idea to try something new, to try something that does not exist yet in the European area, and that was it, actually for me, and I’m really glad that I’m a part of it right now. Erina – Well, actually it was the same as Carmen. They contacted me and sent an email where they explained to me that they wanted to do something cool, something special, like Venus 5. I was like, “Yeah, I’m gonna do that”. That’s it. 1:03

On their bands prior to Venus 5 – I think that’s how they found me, they already knew about the two bands that I have, Rock Partyzani and Hellcat. So yeah, I think that was the main reason they found me because I already had two bands before and I’m a singer in both of those bands. Music has been a part of me, has been a part of me for my whole life. Actually, same for me. I’m part of a band called Track N’ Train and we were like covering songs on YouTube. Also, I’ve been participating in The Voice of Albania, the guys just saw that video or something and our covers as well. I’m a singer here in Albania and I have some bands and stuff like that. 2:43

On if they had input to the songs – The guys (wrote) the songs, and everything was already made before and we are like, “Okay, everything is ready, we just have to sing the songs”, it was easier for us. I have to say that Aldo is a true genius. He really knows what he’s doing, and we’re really happy and honored to have him as the album producer. We were in the studio together with him and Jake E. Jake is the ex-singer from Amaranth and they made it together, they were really nice, they knew how to guide us all. Of course, songs were prepared before, but there were also some changes when we came to the recording sessions because we tried different things and see what fits best into each song. 4:07

On how the vocal parts were decided – Well, some things were, of course, predetermined. But like I said, in the studio, we saw that some things are better with different vocals, so we changed it a little bit. Some parts of some songs also changed or we added something, just working together. We had some, I don’t know if that’s the right thing to say in English, but in Slovenia language, we say we had some red line to know how to work, how to do things. 5:38

On if the 5 members ever actually got together – Actually, last summer, we met together for the first time, but we were at the same room for the first time. It was magical because it was like magic when we met each other and we had that connection and everything was just perfect, the songs and everything and the conversations were just perfect. We worked together at the same studio, we are not separate, and we didn’t work remotely. 6:48

On if they all worked well together – Yeah, definitely. We worked well together. Of course, everyone has a different approach to singing and the songs, but I think every one of us tried to stay herself and tried to put her own voice into the songs. And that is what we did. Also, as I said, some things were sung by, I don’t know, two or three of us. In the end, we saw what’s best for the song and we chose the voice that just fit the best. 7:45

On if the record company helped create their personas in the videos – I think that the company at first chose us, they were like, “Okay, that’s the perfect fit”, but they did not try to change us because we are like ourselves. Our character is written in the video and the singing as well, they did not try to change the way we sing, the way we dress, or appear. That’s us. That’s who we are. 9:05