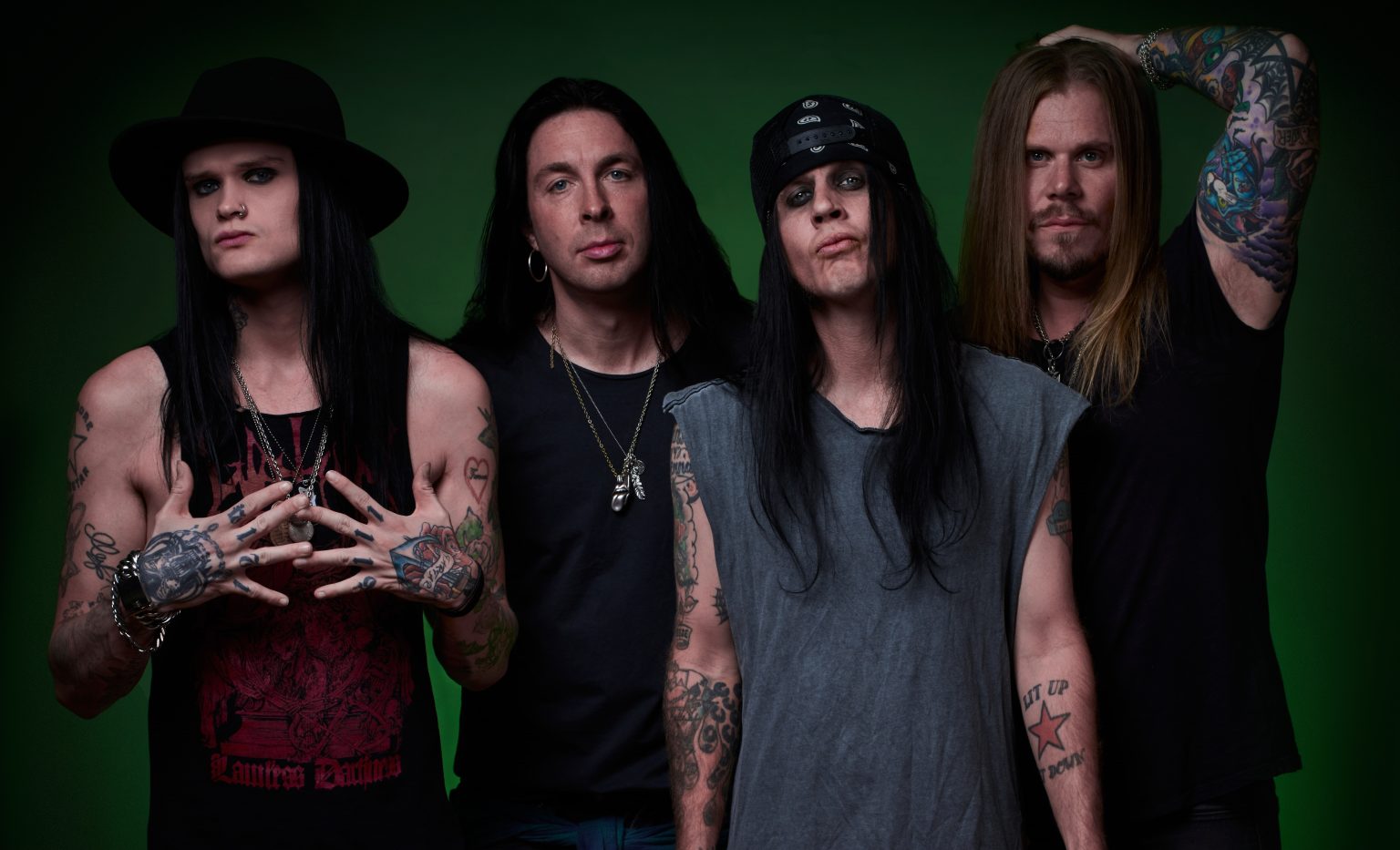 If you have watched the smash HBOMax series Peacemaker, then you are familiar with The Cruel Intentions. The band had two of their songs, “Jawbreaker” and “Borderline Crazy”, handpicked by director James Gunn to be in the series. The band was formed in 2015 and features former Vains of Jenna frontman Lizzy DeVine on vocals. They are about to release a new record, Venomous Anonymous, on June 3 and founding member/bassist/songwriter Mats Wenerson joined me to talk about it.

On taking 4 years between records – It was a lot of things actually, mostly pandemic-related stuff, and with Robin (Nilsson) our drummer living in Sweden. So everything took time and there were cancellations and change in plans. We felt we needed more time because we had songs, but we wanted to make it even better, so that’s why. I guess it was also because we were planning to do something in 2020 but everything went sideways, as you know. Took a lot of time, and I’m happy about it because it turned out really good. 1:01

On what they were looking to achieve with this record – A hard rock album. A really good hard rock album with some punk influences, some sleaze obviously, and some metal maybe in some songs. So I think it’s way more diverse than the first one, a bigger sound and everything. 2:17

On what music the band listens to – Oh, it’s very different throughout the band, and that’s what, I guess, you can hear. From Guns N’ Roses to the black metal scene. Robin, our drummer, is really into black metal, death metal, and heavy metal, and I’m not so much. He’s trying to learn me and I try to listen. Went to see Behemoth actually with Robin when we were playing in Germany. That was the first time I heard Behemoth, I was like, “What is this?” I started to get into that as well. Me and Lizzy have been listening to Ratt and Poison, Shotgun Messiah, and all the Swedish rock & roll bands. Hardcore Superstar’s a big influence. I guess that’s what makes the sound because we don’t wanna be a sleaze because that’s so narrow, so we call ourselves a rock & roll band, rock & roll from all senses. 3:04

On the creative process in the band – Mostly me and Lizzy (do the writing). I write some riffs in a couple of days. Now with Robin living in Sweden, and the pandemic, it became natural to just sit at home, record something, send it to Robin, he listens to it, sets up in the studio, and we do these pre-production demos and then the guys, Kristian (Solhaug) and Robin come in and puts their touch. Obviously, Kristian is a really good guitarist, just take this riff and do whatever you like to make it yours and send it to prompts, and Robin is really good at finding the tempo and the groove and the beats. So the song structure is me, lyrics, melodies, all Lizzy, basically, he’ll do all the lyrics, and then we work together in the end and make it sound like The Cruel Intentions. 4:32

On the rock scene in Scandanavian countries – The live scene is very much alive. Radio play is pretty tough. We got “Sunrise Over Sunset” onto Norway’s biggest rock radio. So that’s really good. But Swedish radio, we have a couple of radio stations that are big, but they usually don’t play (rock), it’s really hard. I spoke to Erik Martensson (Eclipse), and he was like, “We tried to get it in, but one song or something”, and they have really a lot good music, so it’s really hard, but sometimes you managed to get in there. 6:29

On what he was doing prior to The Cruel Intentions – Mostly drinking. I’ve been playing since I was, I don’t know, since I was 10 or something, drums, bass, guitar, everything. So I had a band here in Oslo before this, 2009 to 2012 or 13, together with Kristian, who is in The Cruel Intentions. So we had a band here called The Gotham Saints, we just released two singles and one EP, a four-song EP, and that was that we just played around here and drank a lot. So that was fun. 7:43

On how their music got on Peacemaker – I guess you can say (James Gunn) found us. I saw a post on Facebook where he was looking for bands. He was doing this sleaze/glam playlist, this was years and years ago. So I saw that he Vains of Jenna on it, and I was like, “Check out Lizzy’s new band” and that’s it. Then a couple of years later, you got an email from his publishing, some agency, asking for three, possibly four songs in the show. So I guess he found us with a little influence from me. 9:10

On if the show has led to increased exposure for the band and timing of the new record – Oh yeah, the American statistics went straight up, just about two days after the first episode actually, and the streaming was crazy and it still is…The album was done, and we knew the single was going to hit and we had the premiere (of the show) in January. We were thinking, “This couldn’t be better”, the exposure to get to know the band, hear the old songs, and then a couple of months later, our first single drops and then we have four more singles, then the new album, so it could not have been better…The music (in the show) is front and center and you can really hear it, and James Gunn is really good at promoting it and made a Spotify list with all the bands and added them continuously. So two days before an episode, if you saw a new band pop up, they’re going to be in this episode. That list is doing heavy screaming right now. 10:17

On the track “Salt I Ditt Sar” – It’s in Swedish actually. I wrote a song and we were working with it and we were working for a couple of days. Lizzy couldn’t find any good titles and no lyrics and he said, Fuck it, let’s do it in Swedish”. I was like, “What? That’s weird”. But then he wrote the lyrics and recorded the song in maybe two hours and we didn’t know if it was really good or really bad. It was so weird, we had no plans to sing it in Swedish. Now, I love it. It’s one of my favorite songs on the album…After we wrote it in Swedish we transposed it to English. We had an opportunity to record two versions, one in English, and one in Swedish. (The title) would be “Salt in Your Wounds”. It didn’t have the ring as in Swedish. 13:33

On the possibility of upcoming touring – Everything here is basically open, there are no restrictions. So we have a couple of gigs coming up. Next week, we go to Finland for our first headline show, and after that, it’s Gothenburg with Eclipse, supporting them, then we got a gig with Hardcore Superstar in here Oslo, and a festival in Belgium called WildFest together with Crazy Lixx and Wildness from Sweden. That’s what we got now for sure. We have had some proposals from America but nothing lined up. 15:14

On if their dream US tour would be opening The Stadium Tour – Yeah, that tour, basically because it’s really good. Otherwise, I would say, I think we, together with Hardcore Superstar, like two bands from Peacemaker going there, similar styles, but not really the same type of music. They seem like really cool guys and I think we would do awesome together with them over there…There was some talk (about a Peacemaker tour) about a couple of months ago, but I don’t know if I can go into it, but the idea is really, really good and somebody should do it. 16:32

On if he enjoys making videos – I enjoy it. I must say that. We’ll end up with 10 or 11 videos after this album. So I have to say I enjoy it, especially in the beginning when we did everything ourselves, or maybe it was I who did everything, like planning and figuring shit out the logistics and getting venues and all that, so I still enjoy it. 18:35

An EXCLUSIVE Conversation with Aldo Nova