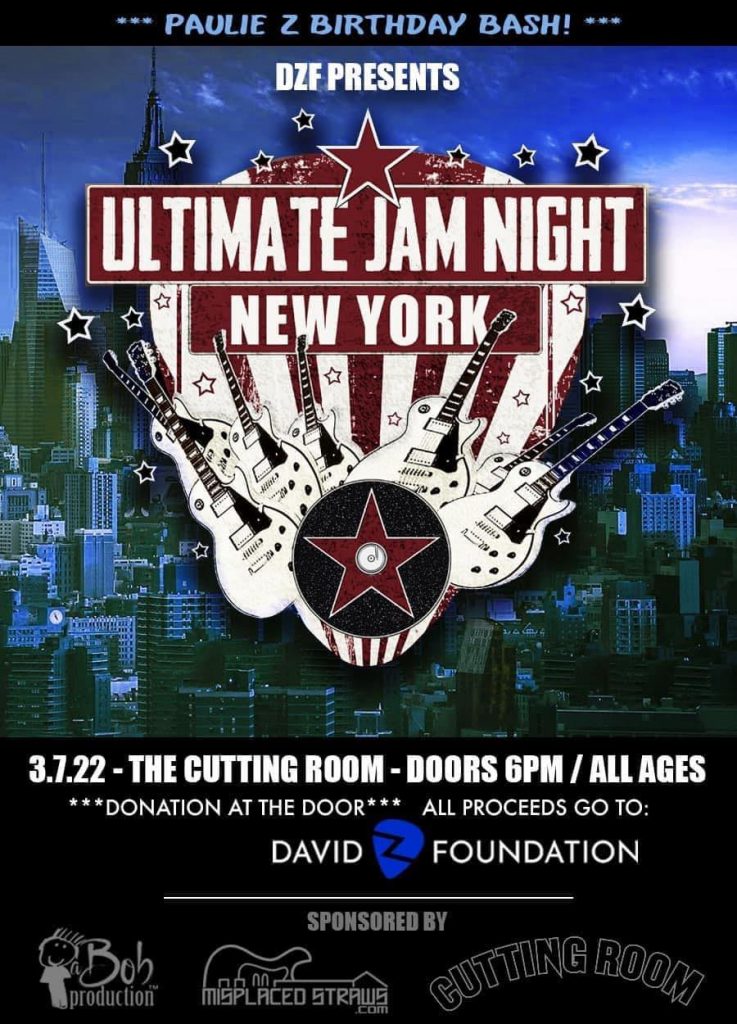 After a 2 year Covid-induced hiatus, Ultimate Jam Night made a triumphant return to the East Coast. In addition to all the special guests and one-of-a-kind moments you expect from Ultimate Jam Night, this one featured some extra special performances.

The evening kicked off with the amazing kids from the School of Rock in Clark, NJ. Mentored by drummer Joey Cassata these kids owned the stage and blew away the standing-room-only crowd at the Cutting Room. Playing songs from Journey, Michael Jackson, Heart, and even Iron Maiden, these kids show that rock is alive and well and ready to be taken over by a new generation. CLICK PHOTOS FOR FULL IMAGE

As School of Rock finished its nearly one-hour set, a buzz filled the room for the long-awaited return of NYC favorites ZO2. As always, Ultimate Jam Night NYC is about more than the music. Under the guidance of LA UJN host Paulie Z, the NYC version also doubles as a fundraiser for the David Z Foundation in memory of the late, great David Z, Paulie’s brother and bassist for ZO2, Trans-Siberian Orchestra, Rubix Kube, Adrenaline Mob, and others. (If you’d like to donate to the David Z Foundation, click HERE).

For the reunion set, guitarist and vocalist Paulie Z and drummer Joey Cassata were joined by Twisted Sister bassist Mark Mendoza and keyboardist/vocalist Paul LaPlaca. The one-hour set was filled with ZO2 favorites like “If You See Kay”, “Isolate”, “Show Me”, and the emotional finale “Fly on Your Wings”. The crowd, including many UJN guest performers, hung on every note while the spirit of David Z filled the room.

I spoke with Mark Mendoza prior to the performance about stepping into David’s shoes for the night. Mendoza mentioned that David was a good friend and how ZO2 shared the stage with Twisted Sister many times during their run. Mendoza spoke of how seriously he took this task and while he may not have David’s dancing rhythm in his feet, he would surely have had David’s bass rhythm in his fingers.

As the crowd caught its collective breath and the emotion of the reunion began to settle, it was time for the main event, Ultimate Jam Night. As Paulie Z mentions in our conversation below, UJN brings together big-name guests with up-and-coming musicians and local talent to create a musical atmosphere unlike any other.

While UJN NYC is always a time to celebrate the best rock music the city has to offer, it’s also a time to remember a great musician and friend in David Z. He’s the reason all this talent started coming together to raise money for the Foundation started in his name by his brother Paulie. The David Z. Foundation works around the world to show kids the power of music. That power, and David’s unending enthusiasm and spirit, were on full display at the Cutting Room.