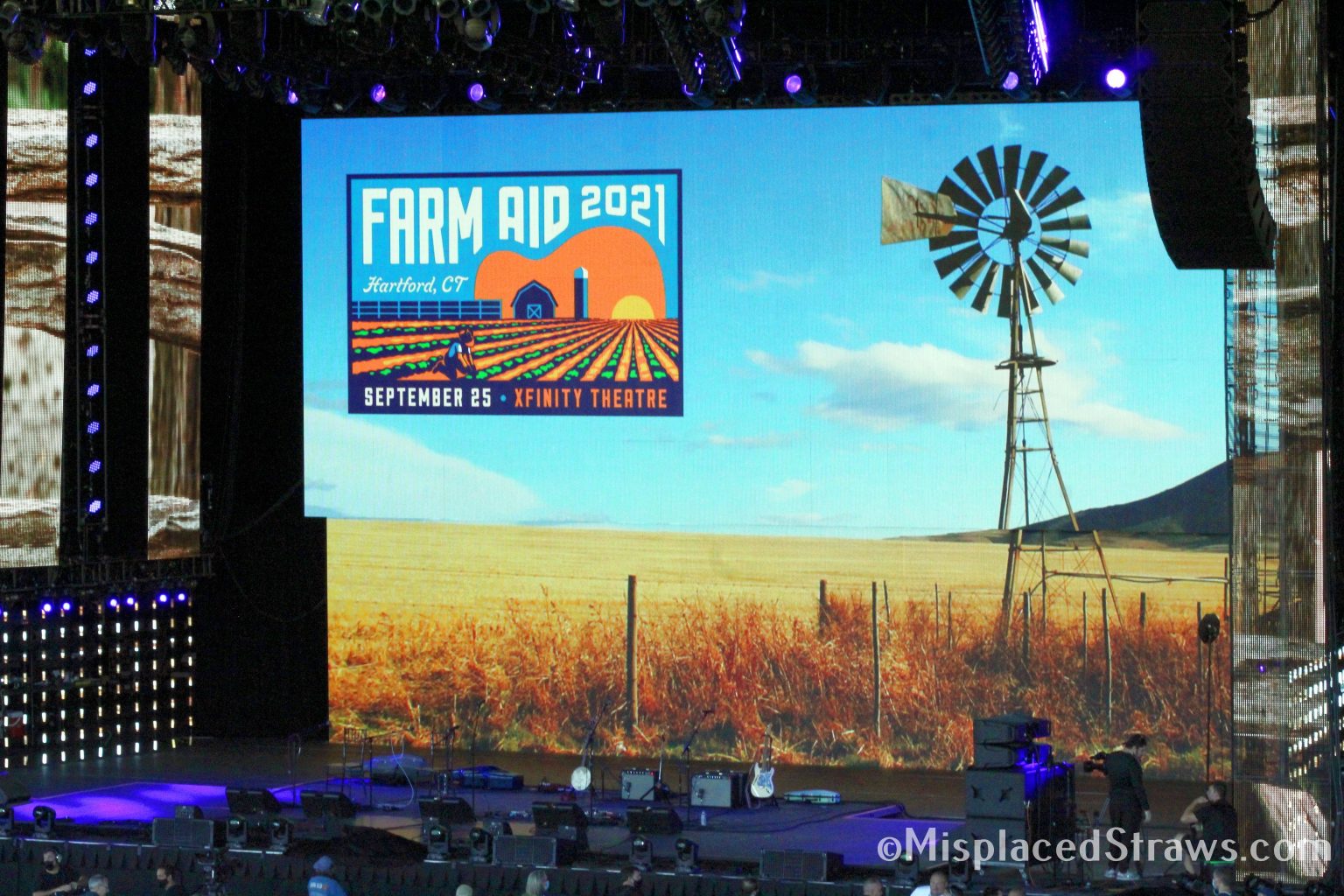 After hosting a virtual festival in 2020, Farm Aid returned to the Xfinity Theater in Hartford, CT for an in-person, day-long celebration of music and the American farmer. This was the second time in its 36 year history that the event has taken place in Hartford, the previous time was in 2018.

With Covid still raging throughout the country, this year’s edition of Farm Aid was a little short on the star power of past lineups. While founding fathers Willie Nelson and John Mellencamp were on hand, their third partner, Neil Young, chose to sit this year out. Farm Aid Board members Dave Matthews and Margo Price, however, made the trip to Hartford. While those present all played great sets, the electricity brought by Young was sorely missed. Mellencamp’s stripped-down set was a highlight, but the energy of a full-on electric rock set was missing.

Aside from the performers, the ample grounds of the Xfinity Theater were transformed into the Farm Aid Homegrown Villiage. There were farm-to-table concessions and a special area with skill-sharing demonstrations, trade show type displays, and a FarmYard stage that hosted briefings and talks throughout the day.

Despite all of the interesting and informative displays, the packed crowd was there for the music. The day began at 1:00 pm with the Wisdom Indian Dancers followed by Ian Mellencamp. The nephew of Board Member John Mellencamp was followed by one of Willie Nelson’s sons, Mica, and his band Particle Kid.

Allison Russell was next to the stage. She gave an intensely personal, powerful performance with her all-female backing band. A performance like this would have been incredible in a small club, but didn’t quite translate to the large stage. The crowd in the amphitheater seats was still sparse at this early juncture which didn’t help the intimacy of the performance. Russell, a Farm Aid newcomer, was followed by a veteran of this festival, Jamey Johnson. Johnson gave a solo performance that, much like Russell’s, felt swallowed up in the large, not very crowded venue.

A little before 4:00 the energy was lifted way up as Lukas Nelson & Promise of The Real took the stage. They are a well-oiled band that captured the attention of those checking out the exhibits and brought them into their seats. It was a fairly short, 8 song set that clearly left the crowd wanting more. Nelson was followed by perhaps the biggest surprise of the event. Bettye LaVette is known as an interpreter of songs. Her set was filled with well-known songs that she rearranges and adds her signature blues vocals to. Despite her long career, she wasn’t very well known amongst this audience but clearly won them over by the end of her set.

Mayor of Hartford, Luke Bronin, came out to introduce a band that is clearly one of his favorites, Nathanial Rateliff & The Night Sweats. Rateliff and his band tore through a horn-drenched soul set that saw the first collaboration of the day. Lukas Nelson joined Rateliff for a cover of The Band’s “The Shape I’m In”. After 3 high-energy sets, things leveled off a bit for Tyler Childers. Childers and his band turned in a set of traditional country music punctuated by covers of Hank Williams, Kenny Rogers, and Kris Kristofferson.

Just after 7:00 pm, the first of the Farm Aid Board members was ready to take the stage, Dave Matthews came out to introduce the newest Board Member Margo Price. Price and her band tore through an 8 song set that featured appearances by Lukas and Micah Nelson, both joining Price on a cover of Neil Young’s “Homegrown” and a smoldering cover of Leslie Gore’s “You Don’t Own Me” which Price turned into a women’s rights anthem and was a true highlight of the night.

Price returned the favor and introduced Dave Matthews and Tim Reynolds. With the absence of Young and Sturgill Simpson backing out for health reasons at the last moment, it was a little surprising that Dave and Tim played such a short set. Always a favorite in Connecticut, most of the crowd was there for their performance which felt a bit short at only six songs.

Founding Farm Aid Board Member John Mellencamp was up around 9:00 pm. While always active in Farm Aid, Mellencamp hasn’t released new music since 2019 and hasn’t played much around the East Coast in a few years. It’s almost easy to forget what an amazing songwriter and performer he truly is. He had a sparse band and absolutely lit up the now packed amphitheater with his 9 song set that featured a surprise performance of a brand new song “I Always Lie To Strangers” from his upcoming record. Mellencamp seemed to be in great spirits, chastising the crowd when they forgot the second verse to “Jack & Diane”. During an energetic version of “Ain’t Even Done With The Night”, the 69-year-old Mellencamp still had the look in his eyes of the mischievous 20-something that first recorded the song.

The night ended, of course, with Farm Aid Founder Willie Nelson, joined by sons Lukas and Micah. Now 88 years old, Nelson is still on the road and brought a 17 song set that revisited his entire career mixing well-known covers and originals, strengthened but the voices and guitar playing of his two sons. While there may soon be a time when Nelson, Mellencamp, and Young won’t be headlining this festival, with the next generation led by people like Matthews & Price, Farm Aid is in good hands.