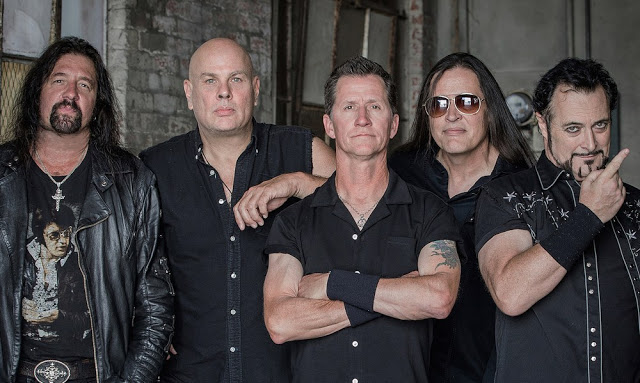 By Jeff GaudiosiMarch 26, 2020Updated:May 29, 2021No Comments7 Mins Read
Share
Facebook Twitter LinkedIn Pinterest Email
When thrash metal got its start in the early ’80s, it was mainly West Coast bands leading the way.  One of the pioneers of the genre was Washington state’s own Metal Church.  Over the last four decades, they have withstood lineup changes and breakups while consistently putting out great music.  With vocalist Mike Howe once again at the mic Metal Church is about to unleash From The Vault, a compilation of tracks written over the last few years and newly recorded for this release.  I spent some time with founding guitarist and songwriter Kurdt Vanderhoof to talk not only about the new record but also the history of the band, his love of prog and everything in between.
Please press the PLAY icon below to hear the MisplacedStraws conversation with Kurdt Vanderhoof:
On putting together From The Vault: When you start putting together records you’re writing albums, you get songs that don’t get finished, songs that you forget about, songs that maybe didn’t fit at the time and just you get kind of leftover pieces. And it’s not that they aren’t good, but maybe just they got, for whatever reason, maybe got overlooked or didn’t fit with what we were doing. And after the past few years working, since Mike came back, we had a bunch of stuff that we that were like
‘You know a lot of this is pretty good”  and I hate to have to go to waste.  So the Rat Pack (record label) came up with the idea of putting together a compilation of from the vault, you know the archives type of thing. We went through everything we had and looked at it said: “Wow well there’s plenty of good, collectible stuff here”. 1:03

On the return of Mike Howe in 2015 – I think it was the hand (of) divine intervention actually. Because Mike and I had actually been,  prior to him coming back, Mike and I kind of reconnected just for fun. I mean, just because we hadn’t spoken to each other in a long time and just thought we’d see what was going on. And I was trying to put, I have this ongoing project that I’ve been trying to put together with Nigel (Glockler) from Saxon for years, but he’s on tour when I’m off and I’m on tour when he’s off…one day it’ll happen because we’re on the same page.  We really want to work together, blah blah blah, but when I was trying to put that together I talked to Mike. Mike and I connected, “Hey, why don’t you sing on that”, and then we started talking about that and he said, “I’m open to it, we’ll see”. It was like just kind of very casual but, basically, “how you doing” and within like days, literally days of him and I reconnecting and chatting again our last singer (Ronny Munroe) left and it was like, “Hm Hey Mike, guess what?”.  And then that conversation started and then we just kind of went down that road and took it step by step.  3:32
“Dead On The Vine”
On stepping away from performing after The Dark: After doing The Dark record, which is the first record we did with an actual budget and a producer and all that kind of stuff, I realized how much I wanted to learn to do that. I found my interest going into production, songwriting and engineering and that aspect of it. The light bulb went on for me that that is really what I love to do. Sure I love playing gigs and performing, that’s all fun and everything, but when you’re on the road there’s like 20 hours or 21 hours a day that you’ve got nothing to do. I get incredibly bored and I like working and I love, I wanted to learn how to make records from the engineering standpoint from the production standpoint and I wanted to give out my songwriting skills in every genre I could you know try, and I try different things like that but, that’s where I started finding my interest going. 5:50
“For No Reason”
On the 1998 reunion of the original lineup – It was a disaster! On paper, it was a great idea. And then we ended up with a half-baked record, a half-baked tour and everything fell apart in the studio and it all landed in my lap and I had to pull a rabbit out of a hat.  You’re trying to make a record that it was, at least, listenable and oh, it was horrible and Dave (Wayne) couldn’t sing anymore. That’s the one point in my career when I was listening to advice from the suits and the people,  management and the suits and the record companies and blah blah blah blah blah that we’re pushing me to do something and I knew it was the wrong thing to do but I did it anyway.  And that was like that’s the one time that I did it and it blew up, totally prove my point, and it was a disaster. So anytime anybody tells me something that I instinctively know is not a good idea for the band I’m never doing it again. 9:40
“Fake Healer” w/Todd Latorre
On his love of Prog rock – There’s a lot of similarities to heavy metal and prog rock. We’re not the only ones, I mean back in the day “Beyond the Black” and things like that were, arrangement-wise, are definitely prog. The left turns and the chances you take and also operating on the perimeter rather than the mainstream. Metallica definitely were prog in a lot of ways.  To me, it’s not much of a stretch other than instrumentation and it’s a little more dynamic.  Rush and early Kansas, all that stuff, Emerson, Lake & Palmer, Yes and all that, I just love that stuff. It’s really a lot of fun too. I like music I mean, I like all kinds of music and I like to challenge myself and try to create as much stuff as I can. Some I’m good at, some I’m not, but  I love creating. That’s my favorite thing to do. That’s why the road got a little bit tiresome for me at the time, I want to be in the studio making music. On the road, you can’t really do a lot of that. But the whole prog thing for me is just a necessary outlet. And I was really disappointed, one of the bad things that happened, I mean speaking of myself personally,  with the current situation with the virus and all that stuff is Presto Ballet,  my prog band, we were booked on Cruise to the Edge and that obviously was canceled.  We were really looking forward to that because we don’t get many chances to perform.12:43
“Badlands”
On the tie between Metal Church and Trans-Siberian Orchestra – That was a relationship Paul (O’Neill, TSO creator, and producer of 1993’s Hanging In The Balance) I maintained. It was just something when we met and started working together we realized we were kindred spirits in an awful lot of ways and we just maintained our friendship.  I was a fan of his and he was a fan of mine and it just kind of went from there. Like any industry, you meet other people in the industry and you connect with some and you maintain friendships and get to know people and some people you get into lifelong friendships and working relationships. Yeah, it’s really cool. Jeff (Plate, former Metal Church, and current TSO drummer) awesome and I love Chris (Caffery, TSO guitarist and former Metal Church touring guitarist) they’re all really great friends. 17:25
Follow Metal Church:
Facebook | Official | Twitter
Share. Facebook Twitter Tumblr Email