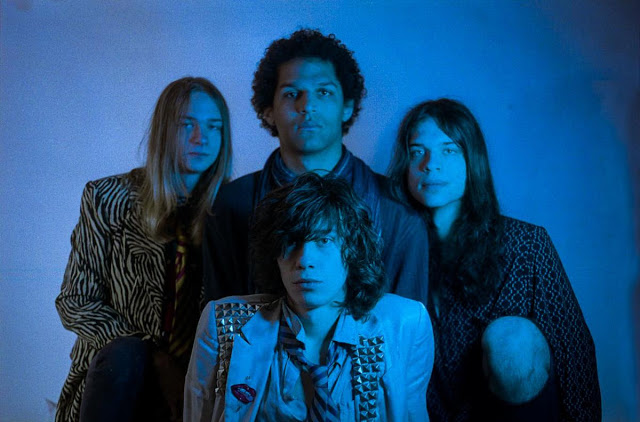 A Conversation with Kenneth Wayne Frost of The Cuckoos

By Jeff GaudiosiAugust 15, 2019Updated:May 29, 2021No Comments5 Mins Read
Share
Facebook Twitter LinkedIn Pinterest Email
It’s always great when you come across a new band that wears its influences on its sleeve but doesn’t sound like a cheap imitation.  Psychedelic rockers The Cuckoos from Austin, TX are exactly that band.  One listen to their songs and you can pick out a dozen influences but their songs sound totally fresh and new.  I had the opportunity to catch up with vocalist/keyboardist/songwriter Kenneth Wayne Frost to find out more about this band and introduce them to all of you!
Press Play below to hear the MisplacedStraws.com conversation with The Cuckoos’ Kenneth Frost:
On combining all of their influences to create their own sound: I think it takes a lot of listening to each other. Maybe there’s something that I want to kind of get through or convey in some music and maybe one of the other guys wants to do something a little different and it’s just kind knowing when to be like “Okay, hey let’s just ride with what they want to do for now and I’ll I’ll get my opportunity to do what I want to do”, but then also I think we’re all just really kind of on the same wavelength and vibe and all of the music we make, just all the different types of music we listen to kind of just slowly creeps into the music we make naturally and yeah we we’re just we’re just trying to… I feel like a lot of bands sometimes run away from the influences and almost go too far or trying to make something that sounds completely fresh, completely new and I think that can have an affect on the quality of the music sometimes. Sometimes if  things aren’t broke you shouldn’t fix it but also it’s not good they get stuck in the past and just re-hash stuff. I feel like we’ve started really recently doing a good job of being us but not afraid of showing that  we acknowledge all of the brilliant creative and awesome artists that came before us and influenced us. 1:54

On their upcoming single “Carpe Diem”: we’re actually going to release a new song, maybe tomorrow I think, it’s coming out in the next couple of days but it’s actually very…(reminiscent of) Joy Division. With this one we were kind of like “let’s let’s really let that post punk thing fly” it’s a true rock and roll jammer called “Carpe Diem” 5:42
“Carpe Diem”

On his songwriting influences: Early on I was really into John Lennon and Paul McCartney and stuff like that but mainly I was always more of a Lennon fan. And I think what it is is just how sometimes he can put the most… he’ll just say a simple line of lyrics and it hits the nail on the head and it’s almost like “damn I should have wrote that” ! Just songs like “Love” like it’s just he wrote some really magical stuff . Then also I’m really into Prince’s song writing style.  I feel like he’s very clever with his lyrics. I feel like some of his lyrics are just so witty and so clever and all have double and triple meanings and they’re funny and they’re serious and they’re sensual and intimate and they’re wild and crazy. I feel like  some of the earlier songs lyrically I was kind of trying to write more vague, faux  psychedelic poetry for people to kind of interpret on their own with at least a loose kind of story to keep it together but I feel like a lot of the new songs they’ve really been a lot more well thought out and they they have a lot more meaning and passion. 7:59

“Why Don’t You Ever Call Me Anymore”

On his vocal influences: I used to really like singing like Beatles songs and stuff like that but then my voice dropped and I couldn’t really do that anymore.  I feel like Johnny Cash has been a big influence, Ian Curtis and Joy Division, Jim Morrison of course. I think he’s probably still my favorite vocalist of all time. Frank Sinatra.  Lately I’ve really been into Kate Bush, I think she’s got a very sweet, intimate,  but like and it’s kind of up lifting but like passionate and a heartbreaking vibe. I feel like  I’m really good at doing the yelling and screaming and wild rock and roll kind of Iggy Pop stuff,  but I feel like I’ve been really influenced by her when it comes to trying to be softer, more intimate  and then Iggy Pop is also another big influence, I  love that guy. 9:38

“We Could Take A Trip To Another Day”
On upcoming releases: We just kind of decided on a whim right before last South x Southwest  to just start dropping tracks until we figure out what we want to do with the record. It started with “We Could Take a Trip” and then we made a video for “Why Don’t You Call Me Anymore?”. We’re going to do “Carpe Diem” next and then next month we’ve got one more single that’s going to come out with a video and it’s called “Lady Boy”.  Then after that we’ll probably decide what we’re going to do.  We’ve got quite a few songs were picking from that are going to make it to like the final album or we may do a double album or who knows what but, an album and a half,  but will we’ll figure that out and then put the album out and then I’m sure new dates and travel comes shortly after that.  So it’s going to be a lot happened and towards the end of the year but we we definitely need to get this record out real soon. 12:19
Follow The Cuckoos:
Facebook | Official  | Soundcloud
Share. Facebook Twitter Tumblr Email