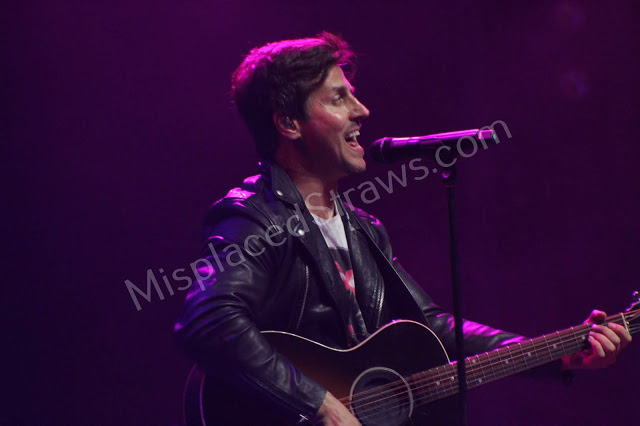 By Jeff GaudiosiJune 7, 2019Updated:May 24, 2021No Comments5 Mins Read
Share
Facebook Twitter LinkedIn Pinterest Email
1994 was a pivotal year in rock music.  Not only was the grunge scene beginning to dominate the music landscape but we also saw the rise of alt-rock.  These were bands that thrived on the college radio scene of the early 90’s and burst into the mainstream during this monumental year.  Now these bands are beginning to celebrate the 25th anniversary of the landmark releases that, in most cases, defined their careers.  The ALITMATE tour, which had it’s opening night in the Grand Theater at Foxwoods Casino on June 6 brought three of these bands together. After a brief opening set from Canada’s Our Lady Peace the night featured full headlining sets by both Live and Bush.

Our Lady Peace released their first record in Canada in 1994.  While not their biggest release, Naveed did contain their breakthrough single “Starseed”.  Our Lady Peace wasn’t the biggest band but did have a handful of hits in their career which could easily have filled up their 30 minute opening slot.  That being said, it was an interesting choice to open their set with “Drop Me In The Water” from their 2017 release Somethingness, a song that was virtually unknown by the crowd.  Singer Raine Maida then led his band into “Innocent”, a song only slightly more well known off of 2002’s Gravity. It wasn’t until their third song that the band reached into it’s bag of hits and ended set strong with “Superman’s Dead”, “Somewhere Out There” (the highlight of the set), “Clumsy” and the 1994 smash “Starseed”. 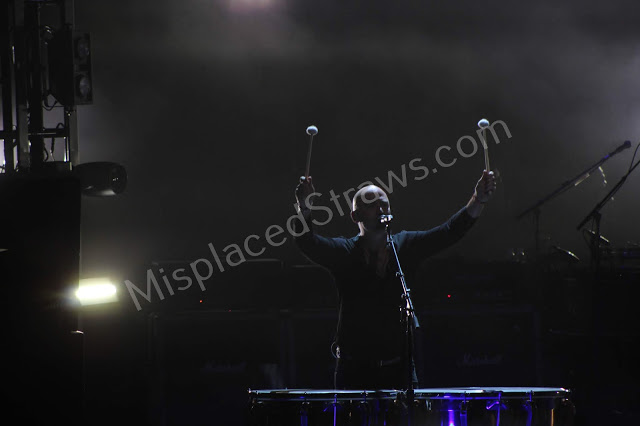 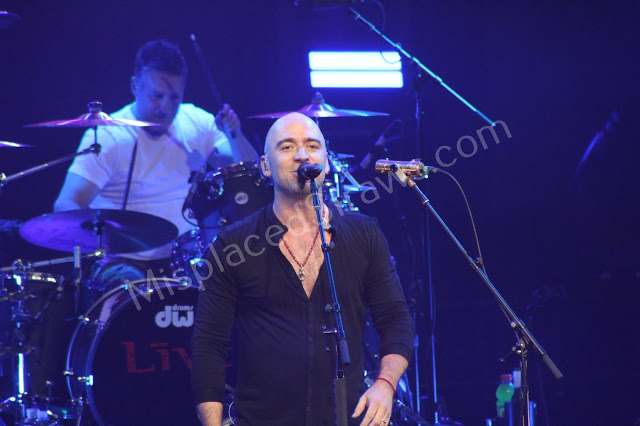 While Live had their first taste of success in 1991 with the Mental Jewelry record, it was 1994’s Throwing Copper that broke them as stars.  The 25th anniversary of that record was well celebrated with 8 of the 14 tracks played on the opening night.  The set opened, as the record does, with “The Dam at Otter Creek” that was followed by “All Over You” and the crowd was hooked.  Everyone was on their feet at the band made great use of video and lighting and showed a tremendous energy on stage.  Their sound was clear and loud which kept the crowd engaged.  They did add two covers to their set, R.E.M.’s “Losing My Religion” and “Paint It, Black” from the Stones.  This expanded stage lineup of the band, in addition to the core original members, vocalist Ed Kowalczyk,  guitarist Chad Taylor, Patrick Dahlheimer on bass and drummer Chad Gracey, the band was rounded out by additional guitarist Zak Loy and percussionist Robin Diaz, did both songs justice as they thundered through their set. 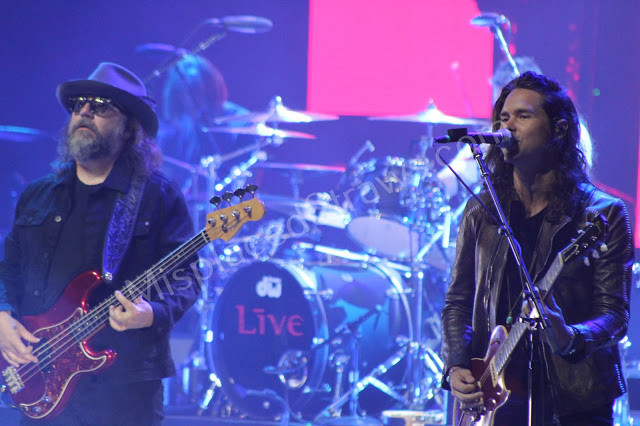 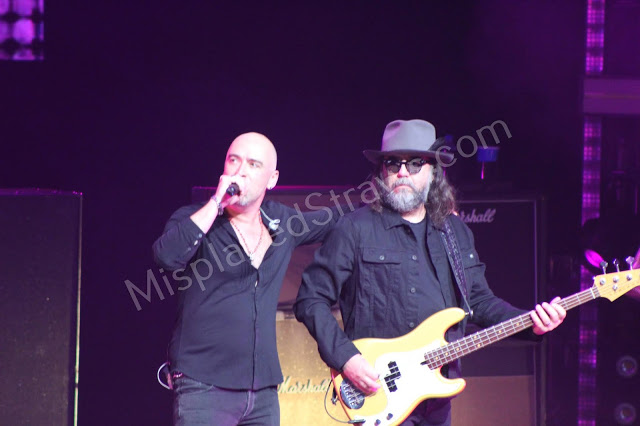 With the focus on the anniversary of Throwing Copper, there wasn’t a ton of room left in the 75 minute set to fit in all the other hits.  While well-known tracks like 1997’s “Lakini’s Juice” and 1999’s “Dolphin’s Cry” sounded just as fresh now, the breakthrough singles from Mental Jewelry, “Pain Lies On The Riverside” and “Operation Spirit” were missed.  The band was clearly on their game, but most important, they looked like they were fully enjoying the opening night and each other. 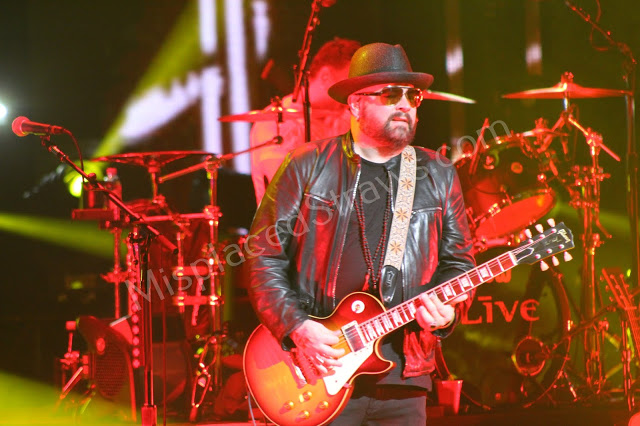 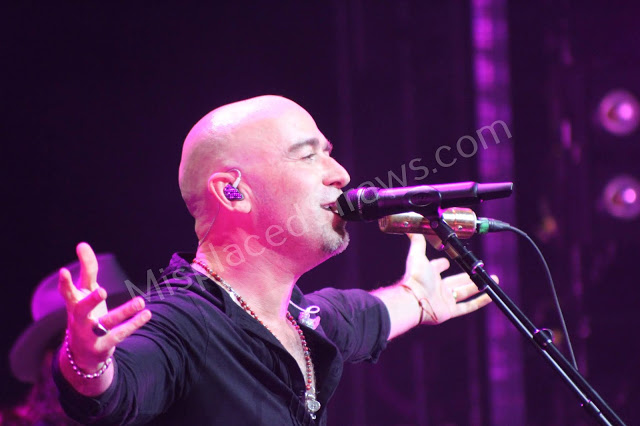 Kowalczyk began the encore with his acoustic guitar for a beautiful version of 2003’s “Heaven” before being joined by his bandmates for “Turn My Head” and ultimately their biggest hit from 1994, “Lightning Crashes”. 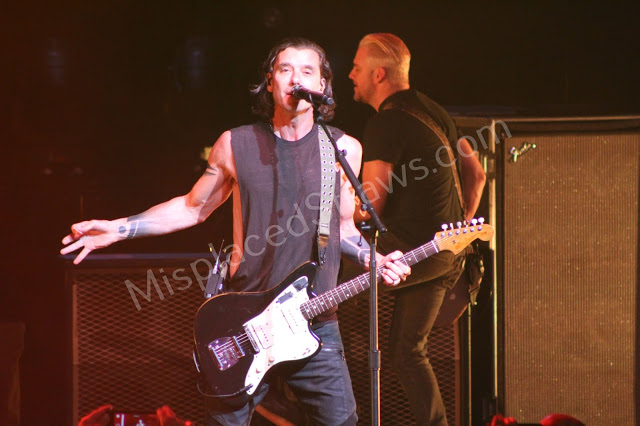 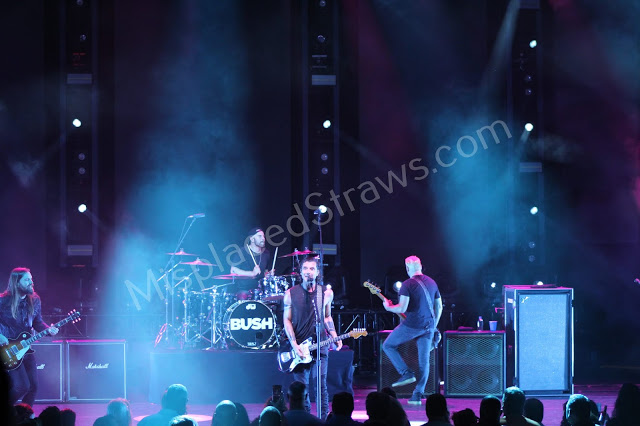 The final band of the night was Bush, whose breakthrough debut, Sixteen Stone, was released in December of 1994.  Led by charismatic frontman Gavin Rossdale, Bush certainly was up to the task of following the tremendous set by Live.  Bush also leaned heavy on their 1994 release playing 7 of the album’s 12 songs.  Rossdale is a consummate rock star, he knows how to work a stage and how to work the crowd.  He spent time in the crowd and stalked the stage with and without his guitar through the night. 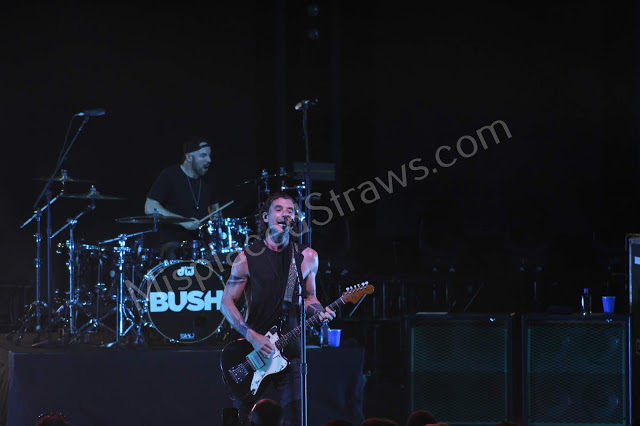 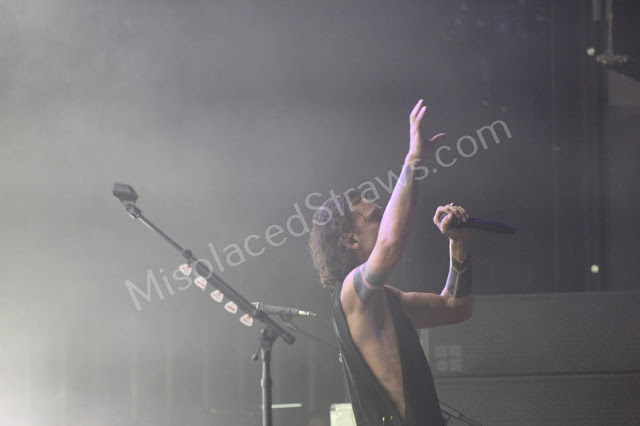 Much like Live, Bush has no shortage of hits to fill a 75 minute set.  Most of the hits were there but there were also some curious choices.  The 1999 LP The Science of Things, which contained 3 hit singles, was only represented by the deep cut “The Disease Of The Dancing Cats”, while the little known “The Sound of Winter” from 2011’s The Sea Of Memories  received a spot in the set. They also added a furious version of their new track “Bullet Holes” from the John Wick Chapter 3 soundtrack.  The band ended their set with a blistering run through three of the biggest hits from Sixteen Stone, “Little Things”, “Glycerine”, and “Come Down”. 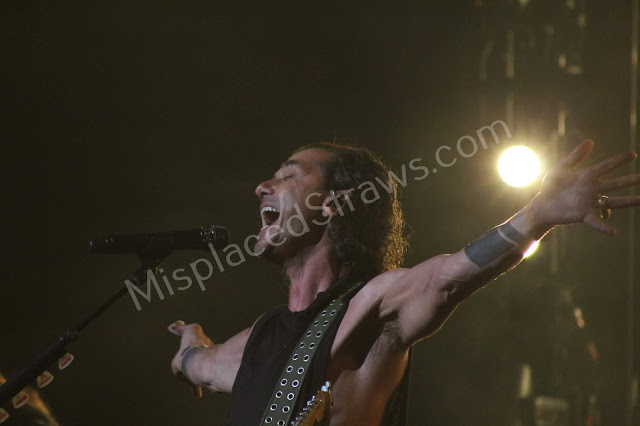 While the night was a celebration of the music of 1994 it was also much more than that.  The size and reaction from the crowd showed that this music, and these bands, are still vital.  Grunge is the celebrated rock genre of the 90’s but perhaps it’s time to take a look at what else was going on in the rock scene at the time.  As all of this music turns 25 maybe it’s finally time to give alt-rock its due as nights like tonight show that, in some cases, it’s aged better than it’s grunge peers.

Our Lady Peace:
Drop Me in the Water
Innocent
Superman’s Dead (R.K. 1949-1997 intro)
Somewhere Out There
Clumsy
Starseed

Live:
The Dam at Otter Creek
All Over You
Losing My Religion
Selling the Drama
Shit Towne
Iris
The Dolphin’s Cry
Paint It Black
Lakini’s Juice
I Alone
White, Discussion
Heaven
Turn My Head
Lightning Crashes