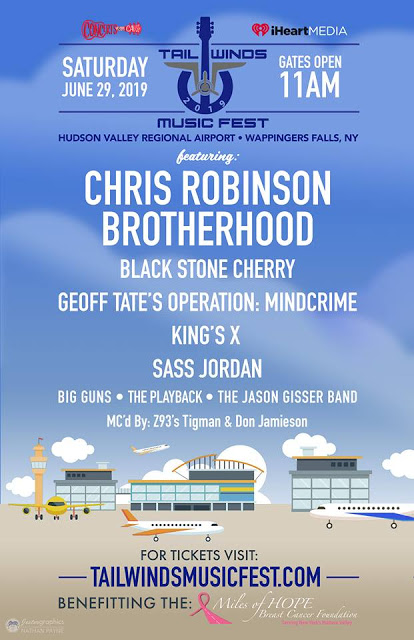 By Jeff GaudiosiMay 7, 2019Updated:May 29, 2021No Comments3 Mins Read
Share
Facebook Twitter LinkedIn Pinterest Email
We are firmly in the age of the music festival.  Every week a new festival line-up is announced and most have become a scatter of different genres.  The Tail Winds Music Fest has it’s roots firmly planted in rock.  The event, being held on June 29 in Wappingers Falls, NY, is headlined by the Chris Robinson Brotherhood and features Black Stone Cherry, Geoff Tate’s Operation: Mindcrime, Kings X, Sass Jordan and others.  I caught up with festival organizer Matt Cavaliere and talked about how a lineup like this comes together and, in a time when some high profile festivals are crashing down, what it takes to put on a festival in 2019.
Please press Play below to hear the MisplacedStraws.com Conversation with Matt Cavaliere:
On putting a lineup together – We felt it was important to bring something fairly diverse. Bringing in Chris Robinson and Black Stone Cherry…those were two bands that mesh together well. Being a person that grew up in the 80’s…I felt that Geoff Tate’s Operation: Mindcrime, especially with his days in Queensryche and a band as seasoned as Kings X (blend well). We sprinkled in Sass Jordan who really hasn’t been here in the market, she’s referred to as the Queen of Canadian Rock. 2:35
On having more than just music at a festival: We decided to bring some activities in…we’ll have a lot of different types of food trucks, we’ll have two craft breweries…and we’ll have helicopter rides.  We’ll put up a massage station, body painting, henna artwork…we have a really incredible VIP experience. 5:00

On tying in charity with the festival – We connected a partnership with Miles of Hope, a breast cancer foundation. We found that that’s an organization we want to link up with and partner up with and bring them on board. 8:20
On what it takes to plan a festival – The planning behind the scenes starts a year out with securing a location, getting things in motion in terms of finances and your core planning. it’s an awful amount of work not only planning but in execution.  There’s a lot more things that could go wrong than right if you don’t stay on top of it. 11:00
On planning the lineup – In the early stages it’s a lot of fun, I approach it as a fan and put a wish list together.  It’s a dream crusher some times with a lot of the finances and what some of these national artists demand. (The lineup) can be diverse but you do want some blending that makes sense. 12:20
For more info and tickets, please visit Tail Winds Music Fest
Share. Facebook Twitter Tumblr Email