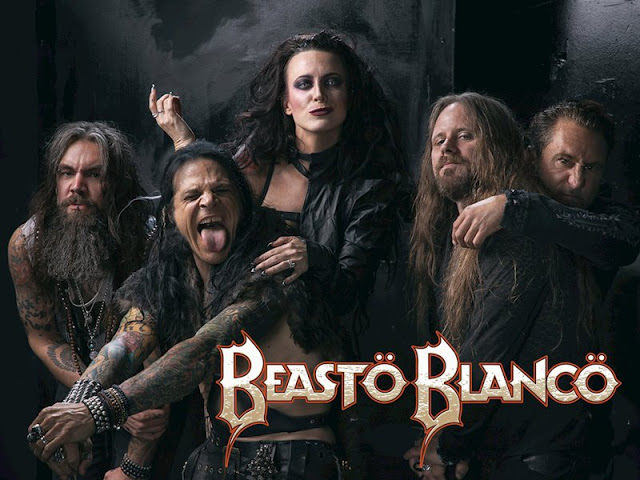 A Conversation with Chuck Garric and Calico Cooper of Beasto Blanco

By Jeff GaudiosiMay 23, 2019Updated:May 29, 2021No Comments4 Mins Read
Share
Facebook Twitter LinkedIn Pinterest Email
It’s no secret that Alice Cooper has one of the most talented bands in rock.  Two members of that band, Chuck Garric and Calico Cooper, have joined forces with Brother Lathem, Jan LeGrow and Sean Sellers to form Beasto Blanco.  Chuck and Calico took some time while on their tour bus to talk about the band’s new record, We Are, on the eve of it’s release.  There may be a few phone issues as the bus was going through some bad weather but this was a fun interview with two great musicians and cool people!
Press Play below to hear my interview with Chuck & Calico:
On the concept that started Beasto Blanco –  (Chuck) says “I want to do this thing called Beasto Blanco and I want it to be like Sonny and Cher from Hell, I want it to be like Natural Born Killers” and I said “Ok, I got it”. 1:00
I’ve been on stage my whole life and something was different, it was really special. 1:50
On the Beasto mantra – The record is called We Are and it’s really a nod to the fans, who are less fans and more family. 3:00
On the power of the fans – I put it out there on social media (that her favorite stage prop bat was stolen)…it came back ten-fold, people started showing up to shows and they had hand-made replica bats…fans are what it’s about…those are the loyal people that we are doing this for. 4:20
On what goes into a Beasto Blanco record – I just want to keep creating and keep moving forward and just come up with as much material as I possibly can. 7:30
On the first single “The Seeker” – I think “The Seeker” was the hardest song to write on the album because we really didn’t have a bridge section for that tune…then BAM it just fell on us in the studio…and it ended up being a great part for the fans, now people are involved in that part.  8:00
“The Seeker”
On “Follow the Bleed” – I’m so proud of that tune, I can’t believe that came out of all of us. 9:31
On his influences – I’m just a product of Rock N’ Roll. I’ve been doing this my entire life. I was a kid of 11, 12 years old and music had taken over my life. I have so many influences you’re bound to hear them 10:50
On Beasto live – You never know what you’re gonna get.  The show may have the same setlist from night to night but it’s not the same show…You never know what’s gonna happen.  Calico is sort of an enigma, you don’t know what she’s gonna do. 13:00
The greatest compliment I ever got from anyone who has seen our band was Lzzy Hale who was at one of our shows and she said “I didn’t want to leave where I was standing…I felt like if I turned away for a second I was going to miss something.” 17:00

On women in hard rock – We’ve always been here and had a lot to contribute…I think it’s more about the audience who was not really ready to watch The Butcher Babies or anybody like that get up there any really let it all out and tell a story and be “heavy metal”. 18:20
With Chuck & I, because it’s a male/female thing it’s like a gentle foray so these big biker guys can like Beasto because Chuck’s in it. 19:40
We’re sort like a salad bar of bands, we have something for everyone! 21:00