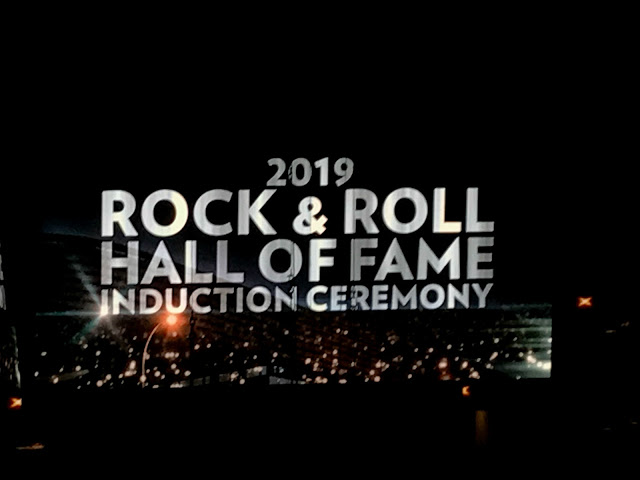 The 2019 Rock & Roll Hall of Fame Induction Ceremony was held on March 29, 2019 in Brooklyn, NY.  This was the 8th Induction we have attended.  It is our 4th in Brooklyn (2014,2016,2017, 2019)   in addition to 3 in Cleveland (2012,2015,2018) and 1 in LA (2013).  We have now seen a total of 68 bands/performers/people inducted into the Hall.
The Ceremony itself has been evolving over the years in an attempt to to both present a compelling live experience and a television special that will bring viewers to the HBO broadcast.  This year saw a number of changes that made it a unique experience with a greater emphasis on the music as opposed to the speeches.  The large number of inductees (7 as opposed to the usual 5) as well as the continuation of inducting classic songs, a practice begun in 2018, and the return of the all-star jam made for a longer than average ceremony at 5 hours.
One of the major differences in this ceremony was a definite emphasis on music.  In the past, inductees were limited to a 3 song performance.  This year, the inductees that chose to play were given at least 4 songs.  Previous ceremonies were also bogged down by having each member of a band give an acceptance speech.  While that was fine for some bands, there were others that featured numerous members and would take close to an hour in acceptance speeches.  This year, it seemed as though each band had a “spokesperson” that gave the main acceptance speech with the others limited to a quick “thank you” or nothing at all.  What this did was leave more time for the music.  Also, the two acts that chose not to play (Radiohead & Janet Jackson) accepted their awards without any type of tribute performance.
In the early years, the night would begin with a speech discussing the year in music.  Over the past few years the Hall moved away from this and began the night with music.  While the past 3 years saw the ceremony kick off with tributes to artists we lost (David Bowie, Chuck Berry, Tom Petty) this year began with inductee Stevie Nicks launching into “Stand Back”. As the song ended she mentioned she was wearing the cape she used in the original 1983 video.  She then said that she had a surprise that she won’t announce, she’ll just let it happen.  She began “Leather & Lace” and sure enough was joined by Don Henley reprising their duet.  Stevie was beaming and enjoying every moment.  She next introduced a “new friend” and brought out Harry Styles to take Tom Petty’s part on “Stop Draggin’ My Heart Around”.  Harry more than held his own and would have made Tom proud.  To end her set, Stevie mentioned that the next song was a very heavy one that dealt with a lot of the problems she saw at the time she wrote it, including an incident between Tom Petty and his first wife. She then went into “Edge of Seventeen”.
After her performance, Harry Styles was reintroduced to induct Stevie.  Harry gave a very good speech, he was quite funny and really outlined why Stevie deserves the honor of being the first woman inducted twice (Fleetwood Mac was inducted in 1998).   His speech did lack a personal element however.  The best induction speeches see the presenter explain what the inductee really means to them.  While Harry didn’t really get into their relationship he did give a very good speech.  Stevie’s acceptance speech was pure Stevie, funny, charming, off-the-cuff and totally enjoyable.  She encouraged women to keep playing and even mentioned she told the members of Haim to go solo so they can get in twice.
When Stevie finished, the video presentation for Radiohead began.  The band was inducted by Talking Heads frontman David Byrne.  Byrne is clearly a fan of the band and respects what they have done, but his speech came off more like a recitation of the facts and timeline of the band.  Soon after being announced as an Inductee, vocalist Thom York said he would not attend the ceremony.  In fact, the only attendees were the rhythm section of drummer Phil Selway and bassist Ed O’Brien.  Phil spoke of what an honor this was, while Ed took it a step further and said that this was in fact a big deal and he really did wish the other members were there.  As only two members showed up, there was no musical performance.

The Roxy Music induction video was next, leading into an induction speech by Duran Duran singer Simon Le Bon and bass player John Taylor.  These two men are clearly fans of Roxy Music and gave a great speech explaining what Roxy meant in Britain.  This is one of the rare times that a band is inducted that had a much bigger impact in Britain than here in America and Simon and John did a great job of framing their career and impact.  John also added a personal story about seeing the band as a teen.  The members of Roxy Music took the stage to accept with Bryan Ferry giving the speech.  His speech was more a list of “thank yous” than anything else.  Of the members inducted only Bryan Ferry, Andy Mackey, Phil Manzanera and Eddie Jobson attended.   Brian Eno and Paul Thompson and Graham Simpson could not attend.  The speeches led into one of the most anticipated performances of the night, the reunion of Roxy Music.  With a great light show behind them and joined by other former members of Roxy (who were not inducted) the band launched into a set of deep cuts and favorites including “In Every Dream Home a Heartache”, “Out of the Blue”, a quick verse and chorus of both “Love is the Drug” and “More Than This”, a chilling “Avalon” and ended with “Editions of You”.  The band sounded incredible and it was obvious that they enjoyed the night and the reaction of the crowd.