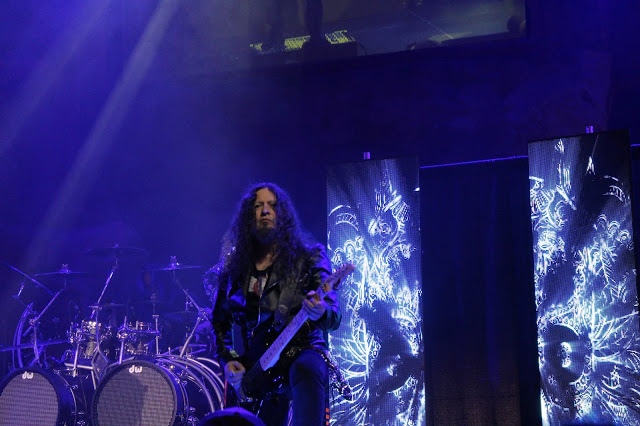 By Jeff GaudiosiMarch 10, 2019Updated:May 29, 2021No Comments5 Mins Read
Share
Facebook Twitter LinkedIn Pinterest Email
Few bands could survive what Queensryche has gone through over the past decade.  After starting with arguably one of the greatest six record runs to start their career (Queensryche EP, The Warning, Rage For Order, Operation: Mindcrime, Empire, Promised Land), the band had a period of turmoil and member changes before returning with a new lineup in 2013 and a new beginning to their storied career.  The next chapter began on March 1 with the release of their 15th full length record The Veridct.
As their new tour headed into Mohegan Sun’ Wolf Den in Connecticut I was fortunate enough to spend some time before the show with guitarist Michael Wilton and then see the band take the stage behind their great new record.
The band, made up of original members Wilton and bassist Eddie Jackson, along with vocalist Todd La Torre, guitarist Parker Lundgren and touring drummer Casey Grillo, took the stage to a packed venue with Blood of the Levant, the first song on The Verdict.  A heavy track that brings to mind The Warning era of Queensryche.  This would be the first of three tracks played from the new record, all of which received a strong reaction from the crowd.  Wilton explained that the new songs are a reflection of how the band views what’s going on on in the world.  He is quick to point out that the record simply raises issues and questions, it’s up to the listener to form their own conclusions.
It doesn’t take long before the band dives deep into the legendary back catalog with a pair of songs from Promised Land and The Warning.  For the fan who hasn’t seen the band with Todd fronting, this is the first chance to hear what he brings to the classic songs.  He has a power and tone that fits perfectly with the classic sound while bringing in a personality all his own and keeping these songs modern.
With a discography like theirs, it can’t be easy to put a Queensryche setlist together.  Wilton says the band makes a conscious effort to roughly divide the set 50% new (post-2013) songs and 50% classic.  In a time when most legacy bands forget about a new record as soon as the tour is done, Queensryche trusts their fan base enough to go back to the recent records and uses those releases to make up a good portion of the set.  The band knows they have strong material and want to present it to the casual fan who may only know the “hits”.
While the big songs still get played and get the crowd going, the band even looks for deep cuts in the back catalog.    For this tour, Screaming in Digital from 1986’s Rage For Order makes it’s return to the set.  It’s a song that Wilton says really fits with this version of Queensryche.
As the night went on, Todd mentioned that he was fighting a cold.  A few times in the night you could hear it in his voice but it didn’t take away from the power of the show.  After a decade in the band, Parker Lundgren has developed a seamless interplay with Wilton, forming one of the strongest dual guitar attacks on the scene today. The newcomer is Grillo on drums who has been filling in on tour for original drummer Scott Rockenfield.  Rockenfield took a hiatus from the band in 2017 although Wilton says the door is always open if he chooses to return.  Luckily for Queensryche they have what Wilton calls a “Swiss Army Knife of talent” in La Torre  who also plays drums on the new record.  Live, Grillo more than holds his own an propels the band and the songs forward.
Fans of the early days of the band can’t help but think of original guitarist Chris DeGarmo when hearing classic songs like Queen of the Ryche and Take Hold of the Flame.  Wilton says that he is still in touch with DeGarmo on a regular basis and that Chris loves what the band is doing now and is a big fan of La Torre as the frontman for Queensryche.
After nearly 40 years, numerous line up changes and a major rebirth Queensryche is most definitely back.  It’s a high energy show that blends new, modern tracks with the classics that have become part of the lives of their die hard fans.  While this current tour is booked into next year, Wilton keeps the idea open for a 30th Anniversary celebration of the band’s biggest record, Empire, in 2020. The Queensryche of 2019 is a band with its sights set firmly on the future while still embracing its past.  They are willing to challenge their audience to listen to the new music and reward them by putting out vital, modern rock that keeps the feel of what has made Queensryche stand apart from it’s peers for nearly 4 decades.
Press Play below for my interview with Michael Wilton.

Setlist:
Blood of the Levant
I Am I
NM 156
Man the Machine
Condition Hüman
Queen of the Reich
Silent Lucidity
Open Road
Toxic Remedy
Screaming in Digital
Light-years
Take Hold of the Flame
Eyes of a Stranger
Encore:
Jet City Woman
Empire