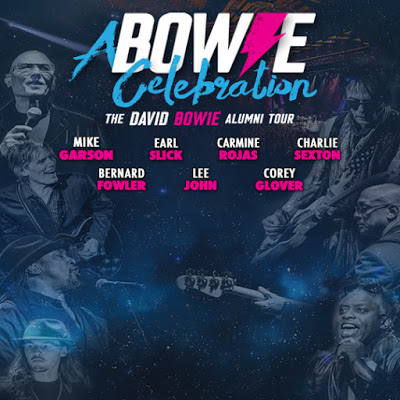 MisplacedStraws is celebrating David Bowie all year long to commemorate the 50th anniversary of Space Oddity. This continued Wednesday night with A Bowie Celebration – The David Bowie Alumni Tour at the Palace Theater in Albany. NY.  As a lifelong Bowie fan there were some mixed feelings going into the night…Will they do the songs justice? What arrangements will they pick for each song? How will the vocals work?  As soon as the music started and the incomparable  voice of Bernard Fowler filled the room all fears fell aside and the next two hours were truly a magical celebration of the genius that is David Bowie.

Prior to the show I was fortunate enough to sit with Bernard Fowler for a few minutes to talk about the tour.  Although he never had the opportunity to work with Bowie, Fowler did meet David a few times over the years (and recorded a cover of the Young Americans track Win). Bowie was known for  experimenting with different arrangements of his classics, when I asked Bernard how the band decided which era to pick from, he talked about how that was left to pianist Mike Garson and guitarist Earl Slick as they spent the most time with David, including the last tours.  Most of these arrangements seem to lean toward what was heard on the Reality Tour.  Bernard also described how he tries to get close to how Bowie sang the songs while mixing in a little of his own vocal style.  I can easily say Bernard kills every song he sings, especially the two pieces that feature just Garson’s piano and Fowler’s voice, Reality’s Bring Me The Disco King and the Hunky Dory classic Life on Mars.
The setlist was wide ranging and covered most of Bowie’s career.  It was also a great mix of the classics (Rebel Rebel, Young Americans) and deeper cuts (Station to Station, Sweet Thing/Candidate).  The night was truly about the songs and the band brought out the best in Bowie’s writing.  Garson holds the distinction of being Bowie’s longest serving band member, dating back to the Spiders from Mars and, with the exception of a short time in the late 70s-80s, was with him ever since.  Earl Slick first came during Diamond Dogs and stayed through the transition to the plastic soul of Young Americans, returning for a stint during the Serious Moonlight Tour as well as David’s early 2000’s work, his last tour and next to last record (The Next Day). Garson’s position in the Bowie cannon is well documented, but I think a show like this proves that Slick may the most underrated of Bowie’s guitar players.  He handled the different era’s flawlessly and firmly left his stamp on the night.
The band was rounded out by longtime Bowie bassist Carmine Rojas on bass, Slick’s son Lee John on drums, guitarist/vocalist Charlie Sexton who worked on the Glass Spider Tour and Living Colour vocalist Corey Glover.  Throughout the set the band used multiple vocalists depending on the song.  Fowler took the bulk of the work while Glover was the one that first got the crowd to its feet and dancing during Young Americans.  One of the great revelations of the night, however, was Charlie Sexton.  Known as Bob Dylan’s guitarist and for his own solo work, he shined as a lead guitar foil for Slick and impressed taking the vocal on a handful of songs.
The highlights were plenty, but perhaps none higher than the take on one of the few songs that did not feature any of these members on it’s original version, the emotional Lazarus off of Bowie’s final album Blackstar.   Garson, MC for the evening, mentioned how this was a hard song to play considering it’s emotional impact but the band excelled.  Sexton took the vocal and the band brought the song to new heights.  Another highlight came toward the end of the main set as Glover and Fowler channeled Mercury and Bowie for a powerful rendition of Under Pressure.
Unfortunately, on a bitterly cold Wednesday night the Palace Theater was only about a quarter filled.  Those that did come were treated to exactly what they hoped for, a group of Bowie alum and fans celebrating the life and music of a legend.  Fowler is quick to point out that this show, A Bowie Celebration is different from the former Celebrating David Bowie entity and he does foresee this continuing and evolving.  One can only hope it does.  If there is one thing the world needs, it’s more David Bowie.
Setlist (Vocals):
Bring Me the Disco King (Bernard)
Rebel Rebel (Bernard)
Moonage Daydream (Bernard)
Fame (Bernard)
Young Americans (Corey)
Space Oddity (Charlie)
Lazarus (Charlie)
Cracked Actor (Bernard)
Station to Station (Bernard)
Ashes to Ashes (Corey)
White Light/White Heat (Charlie)
Sweet Thing/Candidate/Sweet Thing (Reprise) (Bernard)
Aladdin Sane (Corey)
Under Pressure (Corey & Bernard)
Let’s Dance (Charlie)
Suffragette City (Corey)
All The Young Dudes (Corey & Charlie)
Life On Mars (Bernard)
“Heroes” (Bernard)
Share. Facebook Twitter Tumblr Email