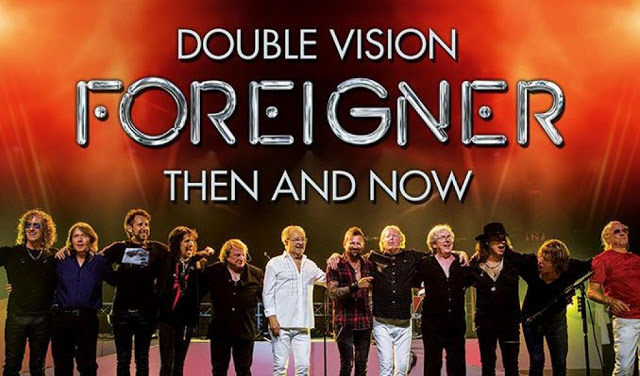 By Jeff GaudiosiDecember 3, 2018Updated:May 24, 2021No Comments4 Mins Read
Share
Facebook Twitter LinkedIn Pinterest Email
Certain bands fall apart when a key member leaves.  Other bands are reduced to playing for 20 people on a Tuesday night when they are down to one original member.  Foreigner isn’t any of these bands.  Over the course of the last 15 years Mick Jones has not only navigated his band through numerous personnel changes before settling down with this current lineup for over six years, but has led Foreigner to a huge following while sometimes performing shows with not a single member of the classic lineup, including himself!

On December 1 however, the full 41 years of Foreigner history was on display at Mohegan Sun Arena.  Billed as the Double Vision: Then & Now tour, the evening featured two versions of the band: first was the Kelly Hansen led version that does not feature any member of the classic lineup (we’ll call them 2.0), second was the classic Head Games era lineup fronted by Lou Gramm and Mick Jones.
The entire set list was song after song of the band’s biggest hits.  2.0 took the stage to the debut album classic Cold As Ice and a few things were readily apparent…first and foremost is that this is a great band!  They may not be the classic players, but multi-instrumentalist Thom Gimbel has been part of Foreigner since 1992, bassist Jeff Pilson (formerly of Dokken) since 2004, vocalist Kelly Hansen (formerly of Hurricane) since 2005, keyboardist Michael Bluestein since 2008 while guitarist Bruce Watson and drummer Chris Frazier entered in 2011 & 2012, so this group has spent a lot of time playing together.  Hansen and Pilson are veteran rock stars that have the  presence needed to own the stage and make 2.0 feel like the real deal. Hansen also has the voice to handle the material which is played exactly as you remember it from the records.  If there is a downside, it may be that the others are a little too used to being side men and could do with a little more energy and stage presence.
As 2.0 finished up their set with brilliant Juke Box Hero, Kelly introduced their leader, Mick Jones.  One by one Mick welcomed each of the members of the classic Head Games era lineup, Lou Gramm on vocals, Dennis Elliott on drums, Al Greenwood on keys, multi-instrumentalist Ian McDonald and bassist Rick Wills (original bassist Ed Gagliardi left after Double Vision and passed away in 2014).  While each member received a huge ovation, the roar of the crowd was reserved most for Lou Gramm. Watching Gramm and Jones embrace felt like one of those moments you never thought you’d see.  All the nostalgia would be meaningless if the substance wasn’t there, but rest assured, these guys could still play. As expected, Gramm’s voice sounded a bit more mature than it used to but he was dead on for every song.  It was a strong, vibrant set of the band’s early hits. Jones, Gramm and Wills all told brief stories to introduce the songs.  The crowd was on it’s feet the entire set and the band looked as though they loved every minute of it.
As Dirty White Boy came to a close, Kelly, playing MC for the evening, talked to the crowd a bit before introducing the rest of the 2.0 guys to join the classic line up and a local choir for a fantastic version of I Want To Know What Love Is and a show ending Hot Blooded.  Kelly and Lou traded vocal lines seamlessly and both versions of the band seemed to genuinely be enjoying the moment.
This mini-tour (four Then & Now shows) almost felt like a passing of the torch.  When Santana reformed it’s classic Woodstock-era lineup at the same venue a few years back there was no interaction between the original band and the current version.  A show like this adds a legitimacy to the 2.0 version, lets fans know that it’s OK to admit that Kelly Hansen is an amazing front man for Foreigner without it being an insult to Lou Gramm.  Lou, Mick and the rest will always be the classic Foreigner, but after this show, Kelly, Jeff and the rest are no longer 2.0, they are Foreigner.

Encore Both Bands:
I Want to Know What Love Is
Hot Blooded