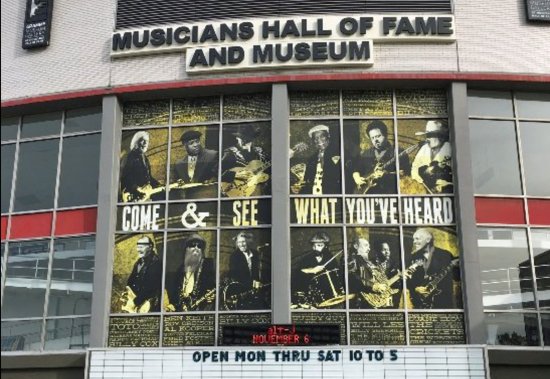 A Conversation with Jay McDowell of Musicians Hall of Fame & Museum

By Jeff GaudiosiNovember 20, 2018Updated:May 29, 2021No Comments3 Mins Read
Share
Facebook Twitter LinkedIn Pinterest Email
On a recent trip to Nashville I stumbled across a pretty amazing place that I never knew existed, the Musicians Hall of Fame & Museum.  After spending a few hours studying the incredible exhibits and wandering through the unique layout of the museum I was lucky enough to chat with Multimedia Curator Jay McDowell.  When our brief talk ended I knew I dig  bit deeper into the museum and its collections with Jay and share that conversation with everyone.
Please enjoy the MisplacedStraws Conversation with Jay McDowell below:
On the origins of the Musicians Hall of Fame – The origins of the Museum started as Nashville-centric…Now the Museum is not just the musicians but the producers, the engineers, the songwriters…It’s not just Nashville, it’s certainly not just country. 2:00
On the impact of seeing legendary instruments – You can put up a picture of a guitar but when you stand next to it and can look at it in 3-D and can walk around it you pick up on the mojo and the vibe of the energy it puts off and there’s something to that experience much more so than reading about it in a book. 7:30
On the exhibit featuring Michael Shrieve’s drum kit from the original Santana – It was on the first two Santana albums…it was at Woodstock, it was at Altamont, it was on the first Ed Sullivan appearance that Santana did. That drum set has so much history that to see it in person just blows people’s minds. 9:50
On the criteria for being inducted into the Hall – It’s growing in scope. You have to be nominated by a member in good standing of the Musicians’ Union and then it’s voted on by the Board. 10:30
The other thing we’ve added is the Iconic Riff. The very first one was Roy Orbison’s Pretty Woman. 12:40
Neil Young summed it up when he did a little interview for us when he said “The Rock & Roll Hall of Fame is the hood ornament and the Musicians Hall of Fame is the engine”.  13:50
On what the MHFM is about – Our job is to show that 500 people made that record, it was not just the person on the cover. 14:40
On laying out the Museum based on geography not genre – There’s a lot of shades of grey, there’s overlap in styles. It started as a Nashville thing, then we got a  Memphis section, well we got Motown, LA, Philly, Muscle Shoals, Atlanta. 19:00
On the Grammy Gallery at the Museum – About 3 years ago we paired with the Grammy’s and we doubled the size of the Museum with the Grammy Gallery.  The Grammy Gallery is all interactive, it’s all hands-on, it’s state-of-the-art, you can play instruments, you can mix, you can DJ, you can sing, you can rap, you can sample, you can produce and engineer.  The way it fits is that we were telling the history, the past, the Grammy Gallery is all about the process and up-to-date.  25:00