By Jeff GaudiosiAugust 17, 2018Updated:May 24, 2021No Comments8 Mins Read
Share
Facebook Twitter LinkedIn Pinterest Email
Talent finds talent. A simple phrase that can be used to sum up the career of keyboard extraordinaire Tom Brislin.  In addition to his band Spiraling, the New Jersey native has shared the stage and studio with the likes of Meat Loaf, Debbie Harry and Renaissance.  Tom also held the keyboard position for Rock & Roll Hall of Famers YES during their Symphonic tour. Currently, Tom is part of the all-star prog collective The Sea Within which also features Roine Stolt (The Flower Kings), Jonas Reingold (The Flower Kings), Marco Minnemann (The Aristocrats), Daniel Gildenlow (Pain of Salvation) and Casey McPherson (Flying Colors).
Misplaced Straws is proud to present the Feature Interview with Tom Brislin. 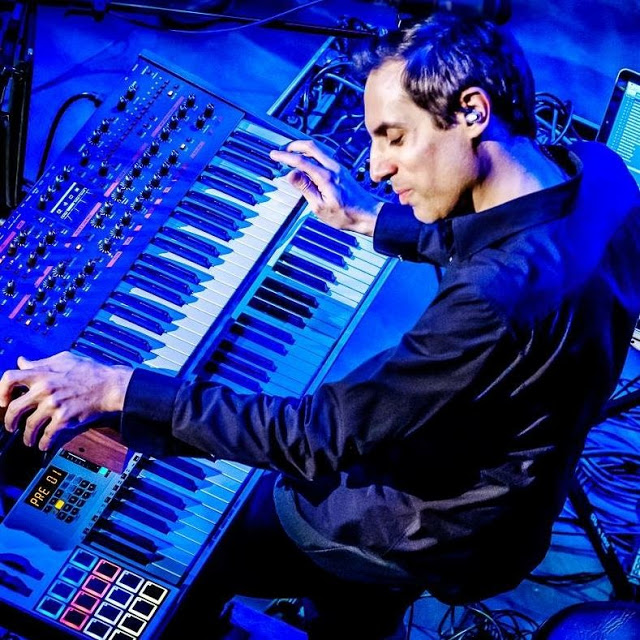 photo – Esa Ahola
MS – You grew up in a musical household, what was your family listening to? How did your parents and siblings influence your musical tastes?
TB – The first thing I remember hearing in the house was the 70’s rock albums that belonged to my sisters. Foreigner, Yes, Led Zeppelin, Pink Floyd, etc. That certainly shaped my musical tastes. My brother was playing in rock bands, and my father was a singer (I later learned he had sung with stage bands in the 1950s). The piano was a central part of the family’s “home entertainment system” and I was drawn to it.
MS – The Meat Loaf gig seemed to be your break, how did that come about?
TB – I had been performing in and around New Jersey and New York City in many settings. I founded Spiraling in the 1990s, which was a vehicle for my original songs, while I was also taking on most gigs that came my way. Solo piano, jazz quartets, working bands, teaching…I jumped into all of it from the time I was 16 or so. Shortly after graduating from William Paterson University, I began playing keyboards for Glen Burtnik, formerly of Styx, who is also a hit songwriter. In time he referred me to his frequent collaborator Kasim Sulton (Todd Rundgren’s Utopia), who was Meat Loaf’s bassist and Musical Director at the time (1998). They were auditioning pianists, I got an audition, and landed the gig. Our first performance was on VH-1 Storytellers and I continued with the band for about 3 years.
MS –Did Meat Loaf lead directly into Yes or was there time in between?
TB – We were finishing up recording sessions for his album Couldn’t Have Said it Better in Spring 2001 when I got the call from Yes. I had a little over a month of downtime before rehearsals for the Yes Symphonic tour.
MS – The keyboard spot in Yes is sort of the musical equivalent of centerfield for the Yankees – a ton of history and high expectations. Being a young guy, what was your approach to the position?
TB – Though I was in my 20s, I had already been a professional musician for a decade, and had several major world tours under my belt at the time. I had the advantage of basically being raised on Yes music, and was very familiar with most of the material. I received some directives from Jon Anderson (essentially: “play every note on the records and sing backup”). My approach was to think of what I wanted to hear from a Yes keyboardist if I was in the audience: to be faithful to the source material (including the classic keyboard sounds), play with passion, and put my own expressiveness into it when the moment would allow.
MS – Did you reach out to any former Yes keyboardists for suggestions or did you use your own fresh takes?
TB – I didn’t have any communication or support from anyone, save for Jon Anderson warning me that he would be a taskmaster and I better be able to handle it (he was fine). There was no sheet music, no transcriptions, no advice, no hints, and I was also responsible for designing and programming my own keyboard sounds. There were plenty of keyboardists vying for the position, so Yes could pick someone who would basically figure it all out themselves.
MS – After Yes you did some solo work and a lot of studio work with other artists, were you actively looking for a band or did you prefer the studio setting?
TB – My band Spiraling was touring and recording before, in between, and after my tours with Meat Loaf and Yes. We toured coast-to-coast in the US in support of bands like They Might Be Giants, Violent Femmes, OK Go, and plenty more. The tours I did as a hired musician would help me fund and self-produce the Spiraling albums. I did studio work, and more big tours came about over the years. I toured with Camel in 2003, was Musical Director for Debbie Harry’s tours in 2007, recorded and toured with The Syn and Francis Dunnery, and in 2009 started touring with the re-formed Renaissance. As the 2010s began I moved from New Jersey to Nashville, mainly to write and record my first solo album Hurry Up and Smell the Roses. I eventually returned to New Jersey and have put on the “tour hat” again, performing with Renaissance, Dennis DeYoung, and again with Meat Loaf, which I wasn’t expecting!
MS – Can you talk a little about how The Sea Within came together? It’s truly a global band.
TB – The Sea Within is an example of how a band can come together in the “new” music world. I had known Roine Stolt for several years and had done some festivals together (Spiraling and The Flower Kings). Roine called me to be a part of a new group he was forming, along with fellow Flower King Jonas Reingold. I had worked with both of them on the Anderson/Stolt Invention of Knowledge album, but this would be a truly collaborative effort. As much as I had been writing and releasing original music, I hadn’t really done so in the Progressive Rock space. It was appealing to get in there and see what happens. We wrote in our respective home studios, exchanged ideas remotely, and met in at studio in London in September 2017 to record the album. 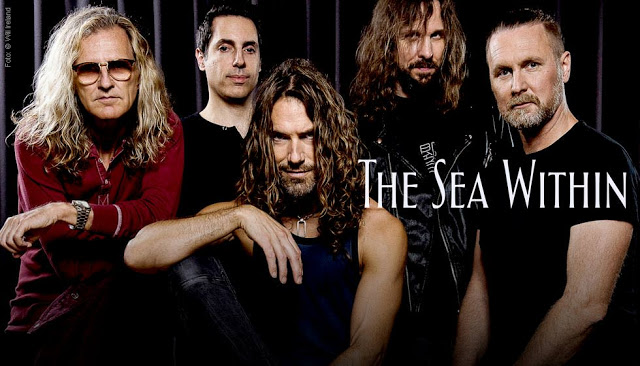 MS – Does everyone pitch in on the writing?
TB – Roine, Jonas, myself, Marco, and Daniel all wrote for the album. In some cases, any one of us would bring a fully-formed song (in my case, “They Know My Name”), and in some cases there would be an idea that would spark more ideas from the other band members. One of use may add lyrics to another’s music, vice-versa, create new parts to an existing idea, etc. We didn’t have any rules.
MS – How involved in the process was Casey? Was it known that Daniel couldn’t tour early on or did his commitments come up later?
TB – Casey became involved with the group in the nick of time. As we were putting the finishing touches on the album, it became clear that Daniel wouldn’t be continuing with us. Casey was able to make his mark on the album, singing “Goodybe”, “The Hiding of Truth”, and parts of “Broken Cord”, which I think gave a really special color to the overall vibe of the album. When we played our premiere show at Night of the Prog festival in Loreley, he really took ownership of the lead singer position, and brought great passion to the whole set. Plus, he’s a left-handed guitarist (like me), so he’s instantly cool in my book! 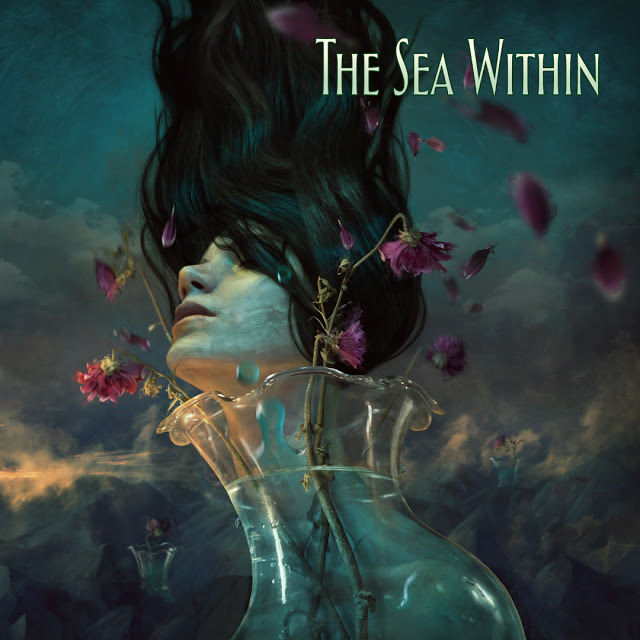 MS – It seems we are in a renaissance for Prog with 2 successful versions of Yes, strong works by genre stalwarts like Marillion, Steven Wilson and Spock’s Beard, and 2 prog “supergroups” in Sons of Apollo and The Sea Within. What do you see as the next step? Have you seen any young prog bands forming in the wake of these releases?
TB – It’s difficult for me to see what younger bands are forming in the genre, but I do feel a lot of renewed energy in prog. It’s great to see bands find a way to reach their respective “tribes”. The opportunity is there for bands like The Sea Within to find those who connect with us, to create the music we want to make, with a label that encourages us to be the best version of ourselves. And the technology is there to foster more and more collaborations. In fact, I’m putting another group together, for a concert as part of the Progstock Festival this October in New Jersey, and that’s another avenue to express more musical ideas. It’s time to create!