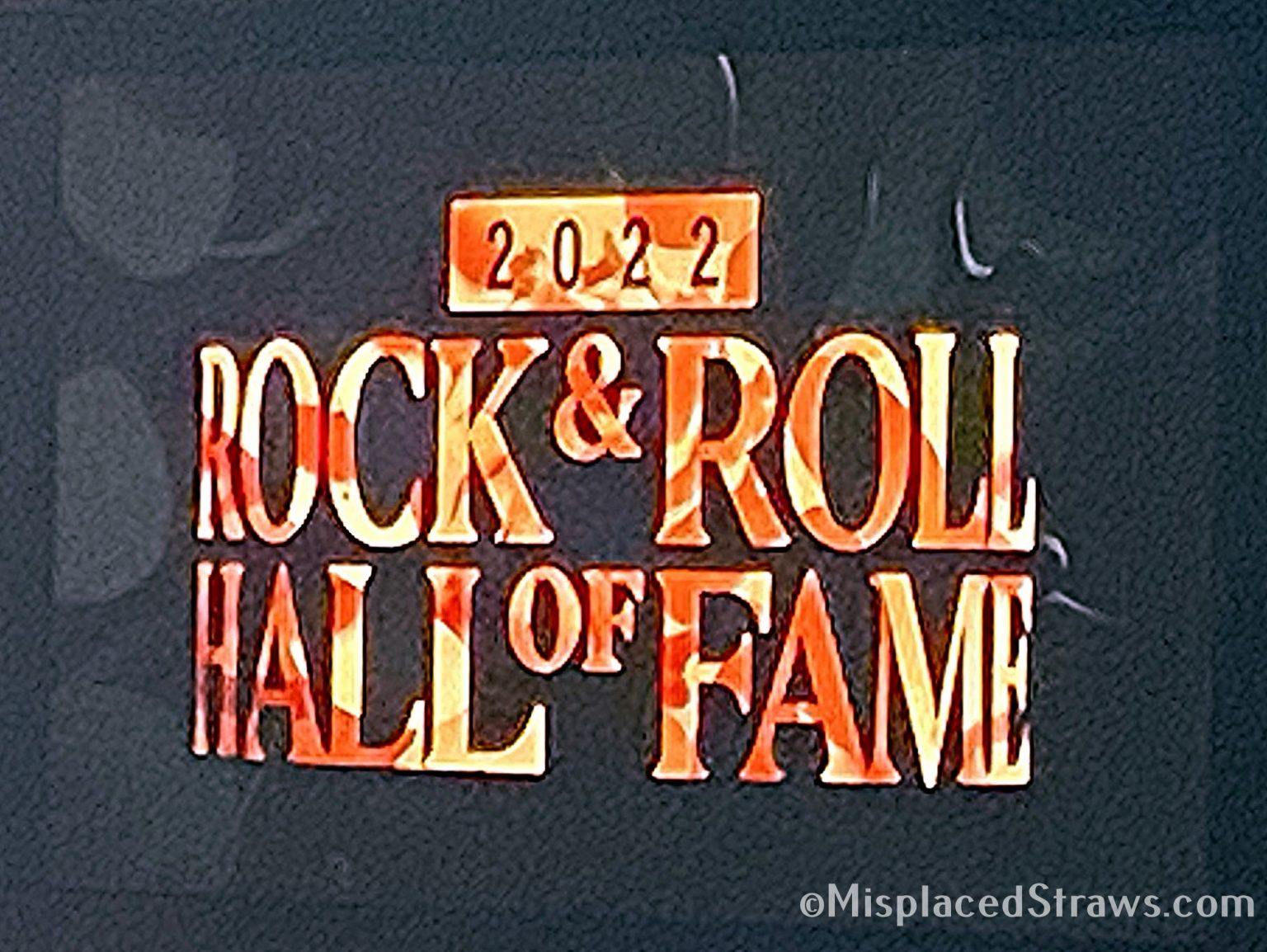 The format of the ceremony has changed over the years.  During the Jann Wenner days, he always led off with opening remarks that were usually met with a chorus of boos.  There were quite a few years when the ceremony started off with music.  This year seemed to follow a fairly straight-ahead format, opening remarks by Chair of the Induction Committee John Sykes, the opening video, then the ceremony.  At various times over the years there were instances when the inductee played their set then came the speeches or vice versa, the format for this year was (mostly)the induction speech, inductee video, performance, acceptance speech.  Dolly Parton changed it up a bit, more on that later.

As the welcome video ended, Robert Downey, Jr. was announced to induct Duran Duran.  Induction speeches usually fall into a few different categories ranging from very personal sentiments to just reading the act’s Wikipedia page.  To me, Downey’s speech was lacking. He was clearly a fan as he mentioned Duran Duran playing a short set for his 50th birthday, but his speech lacked substance. It would have been great to hear what this band meant to him, similar to Drew Barrymore’s amazing Go-Go’s speech a year ago.  Duran Duran was forced to wait so long for their well-deserved induction, they deserved a little better speech.  Those familiar with SiriusXM host Lori Majewski know she would have been the perfect choice for the role.

The band video followed Downey’s speech and then Duran Duran took the stage with it’s current touring band.  This is when the few flaws of the night began to show.  The flaws had nothing to do with the performers and everything to do with the production.  As the band launched into “Girls on Film”, only Simon LeBon’s mic was audible, you could barely hear the music. The band stopped at the first chorus with LeBon pointing out that at least the crowd knows they weren’t lip-synching. The sound was fixed and the band stormed through “Girls on Film”, “Hungry Like The Wolf”, and “Ordinary World”.

After the performance, the members took the podium for their acceptance speeches.  LeBon addressed the missing members, Warren Cuccurullo and Andy Taylor. While no reason was given for Cuccurullo’s absence, a letter from Andy was read where he announced his stage 4 cancer diagnosis. The four members in attendance, LeBon, John Taylor, Roger Taylor, and Nick Rhodes gave heartfelt speeches thanking bands that influenced them, their crew and staff, and mostly the fans. The meaning and importance of the night was clear in their speeches.

The video announcing Jimmy Jam and Terry Lewis, Musical Excellence Award recipients was next. In what should have been no surprise, Janet Jackson came out to induct the pair. She gave very good speech talking about the history the three share and pointing out that she is their favorite artist to work with. Terry Lewis accepted first, giving a speech that was a little long but showed the importance of family in his career.  Jimmy Jam gave an excellent speech centered on how music brings us all together.

Sheryl Crow took the stage to induct Pat Benatar and Neil Giraldo. It was a really good speech that stressed her personal relationship to Pat & Neil as well as the influence of their music on her when she started out.  Following the video, Pat & Neil hit the stage with their current band for a shortened “All Fired Up” into “Love is a Battlefield”. Benatar then introduced classic-era band members Roger Capps (bass) and Myron Grombacher (drums) for a killer version of “Heartbreaker”. Neil spoke first with a good speech stressing the need for music education in schools. Pat gave a very warm speech, pointing out that all is forgiven – presumably aimed at the Hall for making such a sure thing wait so long.  It was great to see their relationship as they both spoke, their respect and love for each other is very clear.

The video began for the first Ahmet Ertegun Award recipient of the night, Jimmy Iovine. After the video, Bruce Springsteen took to the stage to induct his friend and engineer on Born To Run and Darkness on the Edge of Town. As always, Bruce gave a great speech highlighted by the story of how Iovine asked if he could take “Because The Night” and give it to Patti Smith since Bruce wasn’t using it.  Iovine gave a fantastic speech highlighting his remarkable career that spanned being an engineer to running a record label to co-creating Beats.

For me, the big moment of the night was next.  Alice Cooper walked out to FINALLY induct Judas Priest. Cooper stressed the impact Priest has had on nearly every metal band after them.  Following the video, the expanded lineup of the band, featuring Rob Halford, Glenn Tipton, Ian Hill, Scott Travis, and Richie Faulkner, plus original guitarist KK Downing and original drummer Les Binks took the stage. The three guitar, two drummer attack roared through “You Got Another Thing Coming”, “Breaking The Law”, and “Living After Midnight”. As the crowd caught its breath, Travis began the band acceptance speeches, followed by Downing, who remembered late drummer and inductee Dave Holland. Guitarist Glenn Tipton, suffering from Parkinson’s, seemed to struggle a bit during his speech, but it was clear how important it was for him to be up there. Binks gave a quick “thank you”, while bassist Hill was funny in a really good speech.  Halford took the mic by stating, “I’m the gay guy in the band” and gave a great speech on the inclusivity of the metal community.

Another Ahmet Ertegun Award video was next, honoring Sugar Hill’s Sylvia Robinson and her role in creating the hip hop community.

The great Sara Bareillis walked to the podium to induct Carly Simon. Her speech hit all the right notes, touching on Simon’s impact, history, and her personal feelings about Carly. Simon was not in attendance, so after the video, Bareillis read a note from her expressing her gratitude and then gave a stunning version of “Nobody Does It Better”.  A surprise of the night came when Oliva Rodrigo took the stage for the classic “You’re So Vain”.  I say surprise not only because the rumor was Alanis Morissette was supposed to sing it with her (Alanis was in the opening credits but a no-show during the ceremony, according to reports she was at the Friday rehearsal but left because she felt the production team was part of “an overreaching anti-woman sentiment”) but also because of the great job she did.  Often, when younger performers take the Hall stage for a classic song, they sort of get swallowed up by the moment (Mickey Guyton performing “What’s Love Got To Do With It” last year is a good example), but Rodrigo was up to the challenge and held her own.

The final Ertegun Award video of the night for Attorney and Hall co-founder Allen Grubman was next. Unlike the others, he also received an induction speech.  John Mellencamp gave a funny but long speech inducting his friend.  At the end of his speech, Mellencamp took the opportunity to denounce anti-Semitism and point out that silence is complicity.  Grubman, moved to tears, gave a speech (also a little long) where he talked about how the Hall was created and thanked his clients and friends.

After a fairly long stretch without any music, the crowd woke up a bit when Lenny Kravitz came out to induct Lionel Richie. Kravitz gave a perfect speech for the moment, it was funny, personal, and gave a history of Richie’s work. After the video, Richie was at the piano for a snippet of “Hello” before going into “Easy”, which featured a surprise guitar solo from Dave Grohl. For his last song, Richie had the crowd dancing for “All Night Long”. He gave a really great speech where he talked about the difference between a “creative” artist and a “created” artist.

U2 guitarist The Edge come up next to induct Eurythmics. His speech was a good history of the band, but not very personal.  Another production flaw arose when one of the giant video screens on the side went out during Edge’s speech. The screen came back on, thankfully, during the performance.  Dave Stewart and Annie Lennox gave a remarkable performance featuring “Would I Lie To You”, “Missionary Man”, and “Sweet Dreams”. The band was on fire and seemed to really enjoy themselves.  One can only hope this leads to a reunion tour. Stewart spoke first, showering his partner with praise.  Lennox received the biggest standing ovation of the night as she stepped to the mic. The theme of her speech was that we should all spread love, and the crowd clearly loved having her there.

With only 2 inductees left, the crowd roared when Hall of Famer Dr. Dre took the podium to induct Eminem. Dre’s speech was excellent and he gave a very personal history of his relationship with Em. After the video, Eminem too the stage for a high energy performance. He began with a snippet of “My Name Is” into “Rap God”, then the surprises started. Aerosmith frontman Steven Tyler came out for the first verse of “Dream On” into “Sing For The Moment”. As the song ended, Ed Sheeran appeared, guitar in hand, taking Dido’s part for “Stan”.  Eminem closed his set with “Forever” and “Not Afraid”.

The annual In Memorium video played next, no live band just music from some of the artists we lost this year.

Finally, it was time for Dolly Parton.  Pink came out to induct her and gave a wonderful speech, clearly a fan and was influenced by Dolly.  After the video, Dolly broke the format by giving her speech.  She talked about how she’s not rock and thought the Hall was just for rock acts. She also announced that she’s doing a rock album.  It was a fun speech, exactly what you would expect from Dolly. Before walking off stage, she introduced Brandi Carlisle and the Zac Brown Band, who were joined by Pink, to perform “Coat of Many Colors”.  Sheryl Crow returned for a duet with Brown on “9 to 5”.  Finally, Dolly herself returned to premier her new song “Rockin’”.

Dolly then called everyone up for the traditional jam. Joined by Rob Halford, Sheryl Crow, Pink, Annie Lennox, Simon LeBon, Pat Benatar, Zac Brown and others, they played a spirited version of the classic “Jolene”.  As the song ended, there was an announcement that there would be one more song.  Bruce Springsteen, John Mellencamp, and Roy Bittan came out to pay tribute to the Killer, the last member of the original class of the Hall of Fame to pass away, Jerry Lee Lewis. They played a slightly ragged version of “High School Confidential” into “Great Balls of Fire”, featuring a masterful piano performance by the Professor himself.

Part of what made this a fun night was the fact that most of these acts were connected. Dr. Dre was connected with both Jimmy Iovine and Eminem, Bruce Springsteen with Iovine and Grubmen, The Edge with Eurythmics and Grubman, and so on. It made for a very familial feeling. The show ended at 12:45 am, over 5 ½ hours after it began.  A memorable, successful induction night.