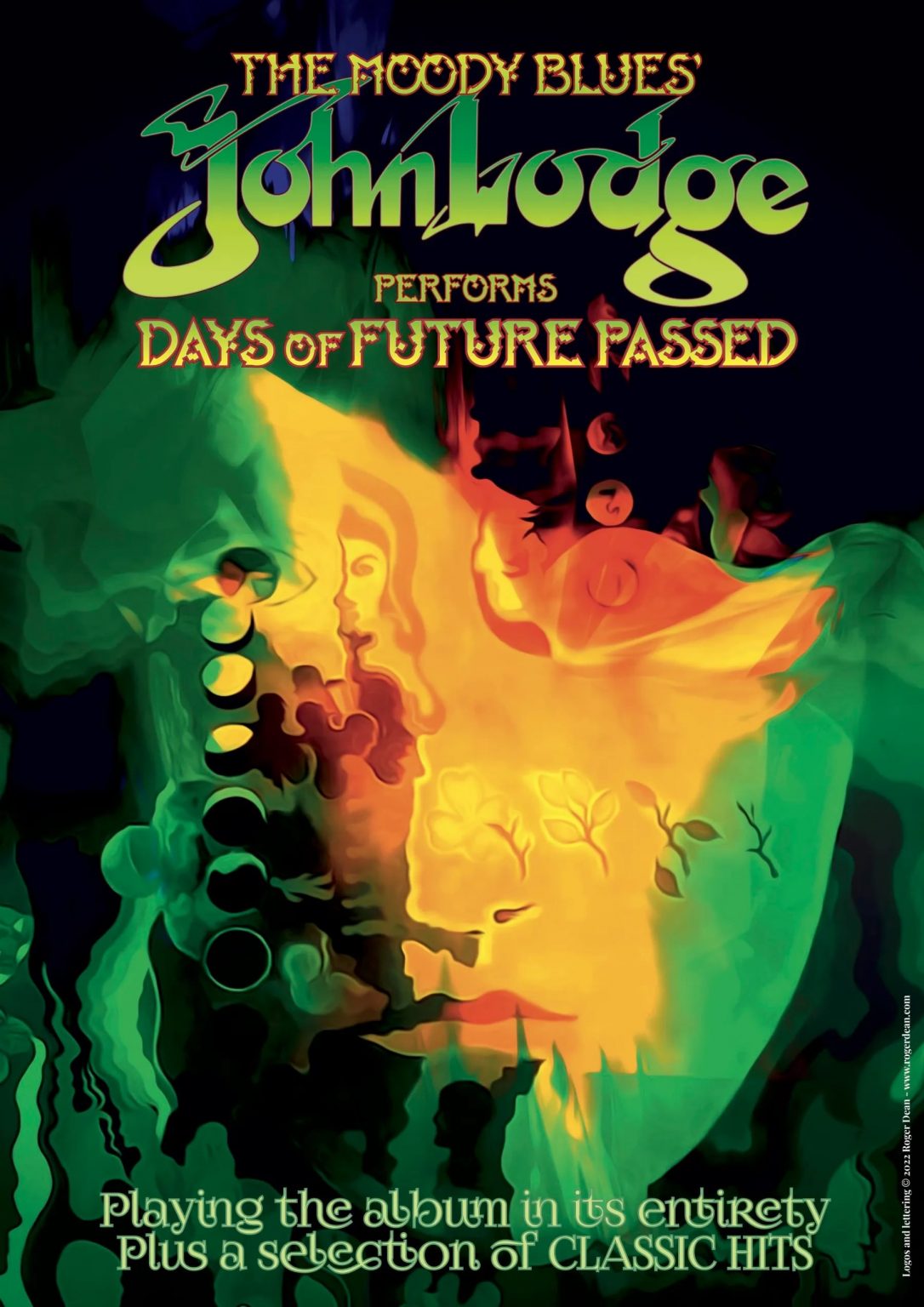 John Lodge is in the Rock & Roll Hall of Fame as a member of The Moody Blues, but over the past decade has begun touring and recording as a solo artist. In early 2023 he will be hitting the road with his 10,000 Light Years band to celebrate the 55th anniversary of the legendary Days of Future Passed record. John recently took some time to talk about the upcoming tour with me.

On how he joined The Moody Blues – I was in a band called El Riot in the Rebels with Ray Thomas, the flutist, Moody’s. Ray was El Riot and sometime during that period, Mike Pinder came in along and played keyboards for us. So when I joined the Moody Blues in 1966, I already knew two guys really well. I also knew Graham Edge because he was a famous drummer in a band called Jerry Levine and the Avengers who I met many times in my teenage years. When I met Justin in June of 66, it was like a completion of the circle. So we formed a great relationship straight away. At the same time, the Decca Record Company wanted to make an album which featured classical music and what they called a “pop band”. They wanted us to record Dvorak’s “New World Symphony” and put lyrics to the melodies. We thought it was a great opportunity basically to record our stage show. Peter Knight, the orchestra leader of the London Festival Orchestra, when he came to see us one night at a club in London, and we discussed it. We said, “Let’s go in the studio for two weeks and basically do our stage show and see what the record company thinks afterwards.” To be honest, the record company was stunned. They didn’t know what it was. They didn’t understand at all. It wasn’t what they wanted and they said no commercially, no everything. They sort of walked away from the project. But there were two people, one guy called Hugh Mendel who was in the classical department at Decca Records, and the vice president of London Records in New York who happened to be in London at the time. They both got it. They both knew what it was, and that was it. They became our mentors. Everybody at the record company disappeared. We didn’t use anybody at the record company. The rest is history.

On if the band would have brought in classical influences if not for the record company – Well, I think we were doing it anyway with the mellotron on the flute and harmonies. Up until then, really, an orchestra or strings had only been used to add icing on the top of a fairy cake. Strange analogy but that’s what it seemed to be. Using a full orchestra as a definitive part of the album never really crossed our minds. But when the opportunity came we realized what we were doing on the road in our stage show and what we were attempting to do musically was very classical orientated. I don’t know whether that’s the right word. But we were using the scope of the orchestra in the makeup of our songs, particularly with the mellotron and the flute.

On the late Graeme Edge – Well, Graeme was an incredible drummer. I used to see him when I was 16 when he played in this other band and never did I think I was going to be in the same band as he was. But I always liked his drumming. When we made Days of Future Passed, Graeme was a great reader of books, a great reader of books. He and I used to discuss different books, different ways of life, different meanings of books, and a huge cross-section of literature. Graeme was an incredible poet. When we recorded the album we realized we needed something that would bind it all together. Graeme said, “I could do it”, and he wrote the classic poetry which will last forever on Days of Future Passed. Just before Graeme died with his passing, I was with Graeme and I said to him what I was going to do with Days of Future Passed and he loved the idea and he said, “Just keep it going, John, keep it going.” Just previous to that he recorded the poetry for me for stage, because I said to Graeme, “You’ll always have a place on stage with me” because although we’ve written the poetry, he’d never recorded it. I got in the studio and recorded the poetry for him, “Breath deep, the gathering room”. It was wonderful. I filmed Graeme doing it. So I’m going to feature Graeme on stage not only audibly but with a video of him narrating the poem.

On his vision for the upcoming tour – The Moodys, as you rightly said, we did a short tour with Days of Future Passed in 2018. Unfortunately, we didn’t continue with it whatever the reason. But I was really disappointed because I really enjoyed being on stage performing the album. I think it’s a very important album for The Moody Blues and for the history of British rock or world rock really. So I’d been playing on stage some of the songs from Days of Future Passed. About a year ago I decided, “What it would be like to perform the whole album on stage?” So I started recording everything again. Jon Davidson came along and recorded a couple of songs with me, of course, I’ve got Graeme on video. We realized this show could really work. I’m really excited about going on stage again and performing Days of Future Passed. I think it’s a project, a piece of music that I want to continue sharing with the world. We’ve made so many albums since then. It’s not a retrospective look. It’s really a celebration of the album 55 years of Days of Future Passed.

On his touring band – My band is the 10,000 Light Year band. It’s Alan Hewitt who was a keyboard player for 15 years with The Moody Blues and has been with me for five years. He’s my musical director, Alan. The guitarist is from Detroit, Duffy King, a fabulous guitarist. I have a cello player called Jason Charboneau also from Detroit. The cello adds some really bottom-end rock and roll for me. It’s a really interesting combination. Drums I’ve got Billy Ashbaugh who is the drummer in The Moody Blues for five years, also with Justin Timberlake and ‘Nsync. It’s a fabulous band. They are fabulous musicians and they really enjoy playing my music or Moody Blues music.

On if he has enjoyed the experience of playing with new musicians – Yeah, I started when I was 15. I enjoy playing music on stage. I enjoy playing my bass. I enjoy playing and singing. I enjoy touring. I enjoy different venues all over the world. There’s something really exciting about this. When you find a group of musicians who are really going to back you up entirely, it gives you the confidence to try anything, try new songs. That’s why I’m going to tour with Days of Future Passed because they are so confident with what they’re doing. It’s exciting for me.

On if he has plans to revisit other classic Moody Blues records – No, I think I’d like to tour with Days of Future Passed. I’m not touring with the orchestra at the moment. But once this tour is over, I’m going to start performing with an orchestra. Then who knows? I would like to go around the world playing Days of Future Passed with an orchestra because The Moody Blues never got around to doing that. I think it’s such a shame. Not a missed opportunity because it’s not an opportune moment. For me, it’s a shame that we didn’t share the album with so many people. The album has meant so much to so many people. I’d like to continue sharing it, especially with an orchestra.

On if he plans on recording new solo material – Over the last couple of years, particularly through Covid, I recorded two new songs which I don’t know whether they were released in the US, but they did very well for me in the UK. I think they’ll feature on a new album somewhere along the line. I think Days of Future Passed with John Lodge and Jon Davison, I think we’ll add the new songs to that as well at some time.