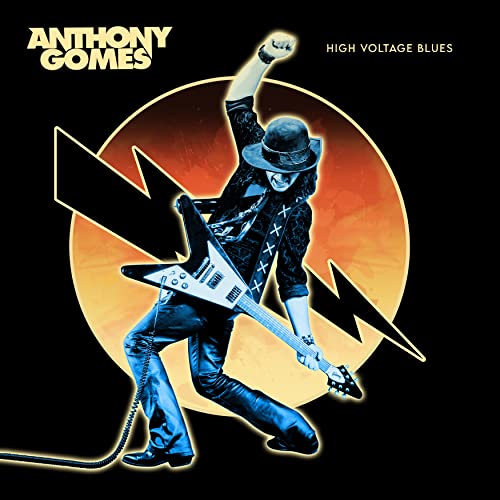 The Blues can be found anywhere, as illustrated by Canadian guitarist Anthony Gomes. Gomes recently released High Voltage Blues which sees him re-recording some of his best songs alongside people like Ray Luzier (Korn, KXM) and Billy Sheehan (Sons of Apollo, Talas, Mr. Big). Anthony recently took some time to talk about his record and his career.

On why he decided to re-record old tracks – Well, what a great question because it’s such a daunting task to take the songs that you have in your catalog that everybody knows the words to and you’re bandmates, they’ve gone to the Burger King drive through at 2 AM with it blaring. We decided that these versions couldn’t be as good because the nostalgic factor would trump a re-recording that was just good. We had to make them 10 times better for people to go, “Oh, I like this better”, it couldn’t be by a small margin. So the label, Rat Pack Records, and Joe O’Brien helped us pick some of the songs. That was an interesting journey because Joe was a new fan of ours. He was more on the rock side of things, and his label is more on the harder edge of rock music, he was listening to Gary Moore and our song popped up and he really dug it. He was a first-time new fan. So he said, “Hey, what about this song? What about that one?” It’s so funny you mentioned this because we were wondering if this was really a really bad idea to redo these sites, but he said, “Hey, there’s a whole bunch of people that don’t know who you are, and this is a way to introduce your music to them”. So it was his idea to bring Billy Sheehan and Ray Luzier from Korn on five or six songs. I said, “OK, well, that’ll definitely up the ante”. My producer and manager, Peter Carson, and I worked really hard on recordings and just try to blow what we’ve done out of the water. You’re so used to singing them and hearing them a certain way, but I got so energized thinking, “Hey man, this is our shot to get these right. Let’s do it. Let’s go all the way”. We had Chris Collier mix it, and also help tremendously. So that was the journey that that took. I was just afraid up till the release thinking, “We might have done the most boneheaded thing. What a way to screw your career”. I’m so happy that the people have been so receptive to the new and older songs on this album. 1:08

On how Ray Luzier and Billy Sheehan became involved – Well, basically, I’d followed them around for months and took incriminating photos into the blackmailed them. The label really worked on that and they worked with Billy and Ray on other projects, and that was really Joe’s mastermind idea. He said, “Hey, what if we put these guys on?” I don’t think that Ray’s ever played on a blues thing before. I really looked at that as sort of, and very different in some ways, like Cream. I’m a huge Cream fan. That to me is a blues guy, Eric Clapton with two virtuoso, maybe non-blues players, and they created this different sound. I think Billy and Ray really brought that to the table and it was very inspiring. It was also like, “This is a dream”, I’m just a nerd, a music nerd, I love music, and I’ve listened to these guys forever, they’re my heroes. Then it’s like, “God, you can’t suck”. These guys are on your album, you gotta at least try to keep up. It was good. 4:25

On sonically blending new songs with old – How you play something 10 years ago, it’s not how you’re going to play them today, or you don’t look like you did in your high school yearbook picture. We have a song called “Turn It Up”. If I was gonna plan this riff today, how would I do it? So I actually re-wrote a lot of guitar parts to keep them fresh and current and give the listener the experience that it was a cohesive album if they never heard us before. This is a new album from a new artist you’ve never heard. At the same time for our fans, I didn’t want them to go, “Oh God, what a money grab this is. They’re re-hashing the same damn songs with a different mix”. So, yeah, all those as paranoid feelings came into full effect on this one. 6:10

On evolving his sound from “clean” blues to more “Texas-style” blues – Oh wow, what an interesting question. I always try to create every album I do like it’s my first album. Why I say that is a lot of artists’ first album is their best because they put no limits on themselves, it’s who they are at the moment. I try to do that, so part of that is exploring, keeping it fresh, and trying different sounds. At the same time, early in my career, I was trying to find myself as an artist, and a lot of people were pushing me in certain directions, “Okay, you need to be branded this way, you’re a Canadian blues guy, don’t get you heavy. You shouldn’t be finger tapping, oh my God”. Then you get a lot of people going, “Finger tapping is so 80s”. Now I’m like, I’m gonna be exactly who I am, which is a blues soul and a rock and roll heart, and if I wanna tap and I wanna play a V and I wanna play a John Lee Hooker lick followed by Billy Gibbons or Eddie Van Halen, I’m gonna do it. That’s who I am, for better or worse. So there you go. I think that that honesty in myself and that comfort level as to who I am because I really don’t fit into that neat blues box, and I don’t fit into the rock box, I’m somewhere in a weird, strange middle place, but that’s my lane and I’m gonna cruise down that lane like I own it. 7:50

On Canadian blues – Oh yeah. First of all, you try surviving a Canadian winter and not have the blues. I’m a Toronto Maples Leafs fan, they haven’t won a Cup in, I don’t know, 200 years. So we got the blues. There are great pockets of Canadian blues, there are wonderful, talented musicians, and it’s pretty much just like anywhere else in the world, there’s people in Helsinki, Finland that have the blues and they’re wonderful blues players. It’s just God’s practical joke that they’re born in Helsinki, Finland not the Delta, but that’s the testament to blues, it’s a global thing. But there are pockets and very, very talented musicians throughout the world, but in Canada, especially too, some wonderful players 10:01

On if he was accepted by traditional bluesmen – The interesting thing, I was embraced with open arms from BB King to Eddie Campbell, to Big Jack Johnson. They took me under their wing and they listened to my style of blues without prejudice. BB King said, said, we had the pleasure of touring with him, he was a great human being, he would tell me stories and say, “Son, you have to do the blues your way”. I put an orchestra on a blues single, nobody thought you should do that in the blues and I cleaned it up. He was sharing the things that he did that were different and that now are accepted as the norm, but weren’t then. The further I go, the closer I get to Mississippi, the more I’m accepted. The more I get closer to the source of the music, the more people understand that, yes, I’m just playing the blues, I’m just doing it with a purple hat or whatever. It’s still the blues. The pushback I get is the further away I get from the source, even in Canada or further around the world, or with the blues community that has their own bias and agenda, and it’s such a small little circle and who’s so much in fighting and division. If somebody claims blues to me, I love the Black Keys I think they’re blues. Some people don’t think they are blues, “You’re claiming the blues?” Bring it on. And of course, I can hear it in the music. They’re wonderful. But to me the pushback is not from the traditional musicians or the region or anything, it’s from the people that are so far removed, but are now self-proclaimed experts, and then they’ve placed themselves in positions of power in the community to be tastemakers and influencers. Luckily for us, the general public is the ultimate tastemaker and influencer. Have I diplomatically answered that? 11:13

On his musicisthemedicine.org foundation – Well, we’re a modest but effective foundation, where 100% of our donations actually go to whatever causes we’re doing. We’ve done various things. We’ve given guitars to war veterans with post-traumatic stress disorder, given them private instruction, funded scholarships, work with Autism Speaks for kids who have non-verbal autism or dealing with autism and music as an outlet for them. We also sponsored a choir at Montreal General Hospital that is made up of paranoid schizophrenic patients. I started Music is the Medicine because my mom battles with median, something I never really talked about early on. She’s a diagnosed paranoid schizophrenic and it was very, very challenging growing up. Music got me through it. Music filled in all the holes that my mom couldn’t and if it wasn’t for music, who knows where I’d be? The thinking was I wanted to help people and give them back through music, how music had helped me. I aligned myself with some wonderful people, a gentleman named Mark Cortesi, a friend of ours in Montreal, Tony Teddi, and Bill Hall in Peoria, helped us out. Tony said, “There’s this choir of mentally ill patients”. My mom who lives in Quebec City had actually been in Montreal General for some treatment. He said It’s made up of paranoid schizophrenic patients. So we made a donation to give them a PA. They do gigs and they make albums, and they had to rent the PA to do their gigs, so through our fans, we raised enough money to donate the PA, and you got some listening stations, Apple tablets, so people could listen to music. We were so moved by this choir, they were singing, it was very, very moving. So we said, “Well, we gotta do better. We gotta get them a recording studio in the hospital”. Oh God, I’m sure the hospital loved drum tracking day. So anyway, again, we went to our fans and we raised several thousands of dollars and they got a recording studio and they presented a plaque in the studio and put my mom’s name on it, which was very, very touching. They make albums now free of charge, and they don’t have to rent the PA. So it’s not like we’re doing huge, super crazy things, but we are making a difference in the way that we can, and it’s all volunteer stuff. We haven’t gotten too crazy big that we need to have a huge payroll, and so if somebody donates a dollar, a dollar goes to helping out. During Covid, we assisted some musicians with modest donations, every little bit helps, putting some groceries on the table. Any way that we can help music makers or people healing through music. We work with St. Jude’s Hospital and gave some listening stations for kids to listen to music and stream music. Thank you for asking about that. 14:47