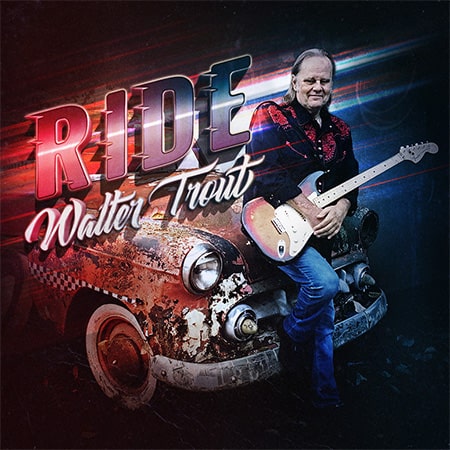 Walter Trout’s career has placed him as the bridge between legends like John Lee Hooker and John Mayall and modern masters such as Joe Bonamassa. Throughout it all, he has continued to release award-winning solo records. His newest record, Ride, is out on August 19.

On whether the pandemic affected the tone of and subjects on Ride – I think in some ways it did because when I look back on the record now, I went about a month recently where I just didn’t wanna listen to it, I just stepped away from it, but recently the promo copies have shown up at my house and so I’m looking at it and listening. I realized that a lot of the songs are sort of me reflecting back on things in my life, especially in my youth, and I didn’t set out purposefully to do that. I think sitting around for almost two years, could cause you to do that, you can kinda get caught up in your own thoughts and you look back at your life and things that happened and friends that you’ve lost. So yeah, I think it did impact, especially the subject matter of the songs. :57

On the intensely personal nature of some of the songs – “Hey Mama” I wrote it basically is a poem one day while sitting around sort of having a conversation with the spirit of my mom and thinking back on stuff that happened in my youth with my stepfather and stuff. When it was time to record it, I did change some of the lyrics because I thought it was a little too… I thought people would get the wrong idea. “Follow You Back Home”, that was a tough one. My wife and I love each other dearly, and we’ve been together for 32 years, but a few years ago, we had a time where, “Let’s figure out what we’re doing with each other”, and I’ll go live in a hotel down the street for a while, and we’ll do some (thinking). What do we want? Kids are grown up. When I wrote that one, I put myself back mentally back in that room. How did I feel? Then I realized I just wanted to go home and be with the love of my life. So that one is really even a tough one for me to listen to, to be honest. But we’re closer than we’ve ever been, but we had to go through that thing of, we’ve been together for 30 years, kids are grown up, they’ve left, what do we want now in the autumn of our life here, and we realized we want to be together. 2:25

On writing personal songs that still are universally relatable – I think if you sit down and you try to write, you approach it (like), “I’m gonna write something that might be universal”, you’re gonna fail right there. Because what is universal among everybody is just emotions, Love, fear, anger, sadness, joy, happiness. If you write about your own experiences and your own feelings, people will be able to relate to that, because in all of that, there is a universal truth. So I never set out to write anything that really (says) “I hope people can relate to this”. I figure if I’m honest and I’m writing from the depth of my heart and my soul and being as honest as I can be, they should be able to pick up on that. This is my 30th album, so I’ve probably written and recorded almost 300 songs, and I can tell you every one of them has a story behind them. 5:20

On the musicians that join him on Ride – Well, I have a long-time drummer, MichaelLeasure, who’s been with me for 14 years, maybe 15 years, he’s probably on my last nine or 10 albums. I have Teddy Zigzag on the keyboards who’s been with me for a while. Teddy is a guy who’s played with everybody, he’s a legend, he was the touring keyboardist with Guns and Roses, and Alice Cooper and Slash, but he was also the musical director for Carole King, so if you figure he can go from Alice Cooper to Carole King, you get the idea, he’s pretty versatile. He did all the keyboard parts and he also did the string arrangement on the ballad, and he did the horn arrangement on the song that has to horn line. On bass, my regular bass player, the best bass player I’ve ever worked with Johnny Griparic, he was in Sweden visiting his mother, he’s from Sweden, he’s lived in LA for 28, 30 years, but he was in Sweden visiting his mother when the pandemic happened, and he could not get back into America. So I have a different bass player playing with me who’s awesome on this record, and his name is Jamie Hunting, and he was with Roger Daltrey, he was with Eddie Money, he was with David Lee Roth, another guy who’s played with everybody, and he came in. I think the bass playing on this record, he did a remarkable job. 6:51

On if he was able to learn from playing with the legends at a young age during a self-destructive time – Well, every one of those guys taught me something, every single one, and I played with a lot of them. I was a side man, just going from one band or one person to the next. I was never out of work, and every one of them taught me music, they taught me some of the things I learned that were not music, I might have been better if I hadn’t learned. For instance, I played with two years with a guy named Jesse Ed Davis. Now, if you’re a guitar player you may remember who he was. Well, I was in his band from 75 through 77, and talk about learning music, that guy taught me more music, but we also partied in a very, very heavy way. I moved out from a little town in New Jersey, and then I got into his band, and suddenly I was playing with all these big rock stars and I tried to live the life and ended up needing a second liver, but I just did 35 years sober by the way. Of course, I learned something from every one of those guys, but I would say the two biggest educators, musical educators I played with would be Jesse Ed Davis and John Mayall. Those two, that was like going to a university of music and I learned more playing in their bands than I could have ever learned going to a music school. 9:01

On if he sees himself as the bridge between traditional blues and blues rock – It’s funny you say that. I was on Joe Bonamassa’s cruise a couple of years ago, and when he introduced me to the crowd, and this was really moving to me, he said, “Ladies and gentlemen if it wasn’t for Gary Moore and Walter Trout, you would never have heard of Joe Bonamassa or Kenny Wayne Shepherd”. He said that to the crowd. I thought, “Well, I guess I really am getting old”. I set out to play the blues, but I wanted to do it my own way, and I also wanted to incorporate lots of influences. I love BB King, I love Johnny Winter. I love Freddie King, I also love Stephen Stills and Joni Mitchell, and (Jimi) Hendrix, and the Cream, and Rory Gallagher. I love so much different kinds of music that I wanted to try and come up with my own kind of hybrid, I’m still trying…I cut my teeth playing with John Lee Hooker and Big Mama Thornton and Lowell Fulson, and Pee Wee Crayton, and Eddie “Cleanhead” Vinson. I played with Bobby Hatfield from The Righteous Brothers. I can’t remember them all. Then, of course, Canned Heat and then John Mayall and Mick Taylor. I have to be true to my own instincts, and there were a lot of times that the critics would go, “Oh, this guy is he rock? Is he Blues? We don’t know what he is”. I’d say, “You call it whatever you want”. I once did an interview and the interviewer said, “What do you call your music? Rock? Blues?” I said, “Call it Fred. I play Fred”. The guy, it was a European guy, he didn’t get the humor at all. When I was 10, I got to hang out with Duke Ellington. Duke Ellington has a quote in his autobiography because he didn’t wanna be categorized as a jazz musician, he didn’t like categories, and now here’s his quote, and I’ve used this one many times, here we go, you gotta think about it, “Categories exist to give the work of the artistic cripple an attractive gloss”. I’ll that would go around and you’re head a while. A guy who can only play T-Bone Walker licks, so he gets a pompadour and a shark skin suit, he calls himself a real deal. I just could never do that, I wanna go somewhere else with it. 11:37

On if he would write an autobiography – My biography is out there. It’s written by a British journalist named Henry Yates, and it’s called “Rescued From Reality”, and you can get it on Amazon. Because music rescued me from the reality of my life when I was a kid. That’s what it refers to. The reality of my life was pretty horrific in my youth, and the music became a sanctuary and it still is when I’m playing and I’m really in there, I’m not even on the planet. I’m not even a physical being, I’m just the sound. 16:00

On upcoming touring – I’ve been out playing quite a bit. Last weekend I played Boss Pop in Holland with Beth Hart and with Sting and with some other people. Let me see, coming up, I’ve got a couple of festivals in a week and a half, in August. Well, I’ve got three gigs in the States at the end of this month, I wanna fly over, do Duluth, Minneapolis, and the Fargo Blues Fest. The day after the Fargo Blues Fest, I’m gonna fly from Fargo to Minneapolis from Minneapolis to New York, from New York to Copenhagen, where my wife will pick me up and we will drive five hours into Sweden, we will get on a ferry boat and go out to an island and I will play a gig. Wish me luck. Then September, I’m touring the States. I’ll be out there from the 8th through the 25th, I’ll be on the East Coast and around the States, and I’ll end in St. Louis on the 25th. Then October and November, I have a full-blown eight-week tour of Europe. So I have a real kind of ball buster coming up, and it’s really my fault after I’ve been sitting around for two years and my wife, who manages me would come in and go, “Hey, Walter, I have an offer for a gig at..” and I say, “Take it”, she’d say, “Want know where it is?” “I don’t care, if somebody wants me to come play in their town, I’ll go”. “You don’t want to know when it is? It might be a 15-hour drive.” “I don’t care.” Now, I’m looking at it going, “Oh boy”. 16:51