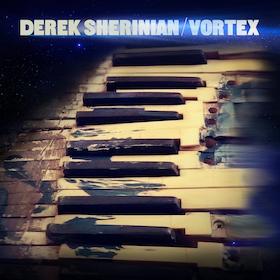 Derek Sherinian is one of the most versatile, inventive keyboardists in the history of rock. His career includes playing with Alice Cooper, Yngwie Malmsteen, Dream Theater, Black Country Communion, and much more. He is about to release his ninth solo record Vortex which is filled with incredible songs played by a world-class cast of musicians. Derek recently took some time to talk about the album and his career.

On if there was an overlap in recording The Phoenix and Vortex – It didn’t really overlap, but before The Phoenix was released, there was like a seven-month or eight-month period that I started getting to work on Vortex and I wrote a couple of songs during that eight-month period just to get ahead of the game. So Simon (Phillips) and I just had such a great time writing The Phoenix, and our energy was still up, and when we got back together to write it felt like a continuation. :56

On playing with Nuno Bettencourt – This is his first record (of mine) that he played on. Nuno and I first started playing together in 2017 on the Generation Axe tour, and we got on really well. So when it came time to do this solo record, I invited him to play and when he agreed, I was very happy because he has a great energy in his playing, very Van Halen swagger and energy, and I love it…We were both born in 1966, and in the Chinese horoscope, that’s the Fire Horse, that’s the name of the title. So that’s there, and we’re both into Van Halen big time and Jeff Beck, and there’s a lot of common things that we’re into. So yeah, it felt great, I love Nuno’s playing. He’s a great guy, and I’d love to work with them any time, he’s welcome out any time to play. 2:05

On playing with Michael Schenker – Well, I haven’t played alongside of him because it’s all been done remotely. When he asked me to play on his album, Immortal in (2020), all the Covid restrictions are in, so there was no traveling, everything was done by remote. So he asked me to play on his track, I was very stoked to be asked by him because he was one of my heroes from way back, UFO and then he put out MSG 1. That was the first time I ever heard of Simon Phillips was on the Michael Schenker album, and then he played just all throughout the years. He’s been a hero. So when he called me in (2020), that was great. I played my tracks and his manager called me afterwards and said, “Michael loves your playing, he loves the tracks or everything, and oh my God, and it’s gonna be the lead-off track on the album”. I’m like. “Oh great”. He goes, “Well, how much do we owe you?” I go, “I can’t charge Michael Schenker, he’s my hero”. I go, “But if you wanted to play on my next record, that would be fantastic”, and he goes, “Done”. So that was it. I wrote a song, “Die Kobra” on Vortex in honor of Michael Schenker because I love him and his plane so much. It’s great to have him and Simon on the same track. 3:32

On trying to assemble the record remotely – Well, the main thing is the structure is there, the grid is there, the basic harmony of the song when we send it to these people, and if they have to learn specific lines then they have to learn it and play it in time. Someone like Bumblefoot, the song that he plays on “Aurora Australis”, which is the trilogy, the epic of the album, there’s some pretty gnarly lines in there, and we knew that he would be the only one that could get it done. 5:14

On Steve Stevens – He’s got a Grammy and he’s played with Michael Jackson and he’s been on MTV, and he lived the life of a rock star since he’s 20, whatever. Whenever someone says, “He’s an unsung hero”, I’m like, “What are you talking about? The guy I total rock star”. Steve, is awesome, and this is the third record he’s played on since 2004, and he’s great, and not only is he playing, but he co-wrote two songs. He’s co-written on my past albums as well, and Simon and I really enjoy collaborating with him. So Steve is another one of those players that has an open invitation. Whenever I’m making a record, if he wants to play and send some riffs over, we are always open to playing with him. 6:09

On if he’d ever do a straight-up, acoustic jazz record – Funny, you should ask, sir. My next record that I’m working on with Simon is gonna be straight piano trio, that that’s the next phase…I’ll tell you what though, I’m practicing every day to get to that point, I have my work cut out and I’m humbled on the piano because there’s some really amazing pianists out there that are just fucking amazing and killer. I have my work cut out. And I love it. 7:23

On the Jeff Beck influence on “Key Lime Blues” – Since we can’t get Jeff Beck, the next best thing is (Steve) Lukather and Joe (Bonamassa) because they love Jeff Beck too. So they go in and pay their homage…Here’s the thing, totally, I love it. Simon obviously played with Jeff Beck, Luke produced, I think, did some work with Jeff Beck and Joe Bonamassa loves Jeff Beck. We all do, we all admire him very much. That session with Joe and Luke on “Key Lime Blues” happened a year ago today. It’s funny because it came up on my Facebook. A year ago today, they drove up from LA, Joe was kind enough to pick Luke up and bring them up to Ojai. It was a long time since all four of us have been together and was great getting in the studio, the two of them together. I had some cool footage. I’m gonna post some today on Instagram of that session, I’ll post everything I have, but fantastic, and the track turned out amazing and it was a great hang. 8:37

On sounding good when playing with top guitarists – Can I say something at the risk of sounding cocky? I sound great with whoever I play with. It’s the same thing, it’s the same deal, and I blend in with whoever it is, and I play off at their strengths and I’m able to be a chameleon but at the same time, impose my signature sound in whatever climate I’m in. So that’s the key right there…It’s factual if you look at it, the proof is in the pudding…Also, a huge part of it is Simon Phillips. His quality control and his ears and seasoning when we’re putting this stuff together, He’s, I don’t wanna use the word guardrails, but we are each other’s guard walls because sometimes he gets a little too jazzy and I have to go, “Hey, wait, this isn’t the Baked Potato, we need to make this a little bit more rock”, and sometimes I’m a little bit more bone head and he reels me in, so that’s the great thing of collaborating with him is we have that a little bit of creative tension, but it always turns out awesome. 10:37

On if there will be a new Black Country Communion record – I hope so. Every presidential term we seem to crank out a record, so I think it was about time. 12:12 On preparing to continue the Sons of Apollo tour from 2020 – I haven’t delved in yet, I’m gonna delve in, I think the third week of July, because our shows, our rehearsals start the fifth (of August) or something like that. So I’ll need a couple of weeks to brush off the cobwebs, so I’ll let you know. 12:49

On Dream Theater – Dream Theater was a very important part of my career, and there was a lot of musical growth that I went through during that time. I think if you listen to me, my playing before I went in and listen to it afterward, you can see that there is massive growth, in a lot of areas, not only technique but my signature sound developed on that Falling Into Infinity album. I think that’s where it all started to blossom, and there was a lot that I learned in that band, and it was great to carry on. It was kind of like the best finishing school after Alice Cooper and Kiss, then Dream Theater. Then it was time to go out and make my solo records and go out and start my career for real. I had great experiences with all the bands I’ve played with, Alice, Kiss, Yngwie, John Sykes, Steve Vai, Zakk (Wylde), the list is long and strong. 13:43

On if he prefers being in one band or playing multiple projects – I wish it could just be one cool band, one great, cool band, like Metallica, AC/DC, Led Zeppelin. I think it’s cool to do solo records and that’s cool, but I don’t know, to me, I don’t wanna be that guy in a million bands. I wanna be in one really strong band, otherwise, I wanna play jazz, make jazz records with Simon…Honestly, I’m at a point now, my eyes, I’m getting older now and my eyes, I can’t fucking read the keyboards, the presets when I play live anymore, I can’t see it. Everything is too small, and so I think it’s just easier for me to play piano because there’s nothing except the keys and I can see those and on B3, I know where the drop bars and pedals and stuff are and I think that’s where we’re going. 15:21

On upcoming live shows – There’s a festival in Armenia called the Starmus Festival, and it’s a merger of science and music, and it’s fantastic. The greatest science minds are gonna be there, as well as music, Sons of Apollo is gonna be playing there, and also my trio with Simon and also a quartet with Bumblefoot playing electric stuff. So it’s gonna be three nights that are gonna be played, which I’m very excited about. That’s it as far as Sons of Apollo. But with Simon, we’re gonna be playing those shows in Armenia and also a show in Ventura, California on August 29th. It’s gonna be built as “Derek Sherinian and Simon Phillips”, and we’re gonna take this out on the road, hopefully with this line-up, and hopefully Bumblefoot will wanna play with us after these shows and go out and see what we can do. 16:30