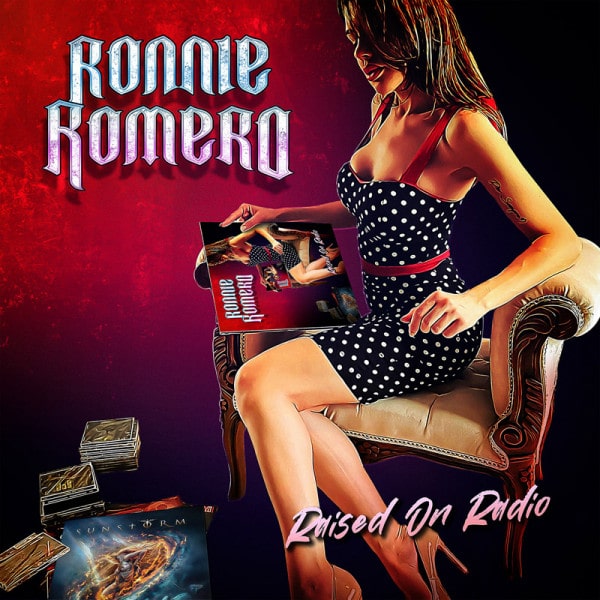 A Conversation With Vocalist Ronnie Romero

In a fairly short time, Ronnie Romero has climbed to the upper echelon of rock vocalists. From high-profile gigs, like leading Ritchie Blackmore’s Rainbow and Michael Schenker’s band, to bands like Lords of Black and The Ferrymen, Romero has done it all. Now, he releases his first solo record, Raised on Radio, and took some time to talk about it.

On why he’s doing a solo record after always being in a band – Well, actually, it was an idea from my record label because they were chasing me for the last three years to make a solo album. Honestly, I was not too much into the idea. I always thought that when a singer makes a solo album out of his band is because first of all, he’s got a long career already, and that means he’s kind of a board of the music he was doing, so I want to try something different. So I thought like, “Okay, I’m just starting my career, and I’m not bored about the things that I do”, because actually, I’m doing a lot of different things that make me fulfill my musical interest, so I didn’t think making a solo record will bring something new and something different to the fans. So I was not too much into the idea, but then Sarafino (Perugino) came with this idea on the table that while you wait and decide to make a solo record while you just make up covers album? Okay, that would be an idea. Because I never did before, and I was doing covers for the last few years with Rainbow, Michael Schenker, Vandenberg, and many others. So it looks like my main job was to make covers anyway. :54

On choosing deep cuts for the album – It’s not the typical cover alum that you make, just to entertain the people to do something different. It has a real meaning behind it because as you mentioned at the beginning, the tracklist is different, it’s not the typical tracklist. All the songs are the songs that the people wouldn’t expect me to sing actually. So I know the people expect me to sing Rainbow and Deep Purple and Dio and everything. So I was thinking, “If I’m gonna do this, I really want to surprise the people in the way that I’m singing songs that the people wouldn’t expect, and second, it must be songs that present the challenge for me to sing”. Because when you sing Dio or when you sing Rainbow, I did that many times. The people say that my vocal is kind of a similar to Dio so it’s not challenging. So for me, this album and this tracklist is very challenging because actually there are some songs that don’t fit my vocal style at all well. 2:47

On choosing Elf’s “Carolina Country Ball” as the Dio cover – Every song was very, very easy to decide to put it on the tracklist because I can tell you that every song is related to the memory of even from my childhood. There’s no song on the album that I picked out just because, or maybe because this is gonna fit or it’s filler or something like that. Every song is related with the memory because I took this album as a tribute to all the people that I work with and all the bands that I was listening to when I was a kid. Especially, I have a lot of memories with my father, rest in peace, because he was a huge fan of the classic American rock bands, so that’s why you can see Grand Funk Railroad and you can see Kansas and you can see Survivor, Foreigner, because those were the bands that I was listening too since I was a kid. The Dio was very easy because I love that Dio era before Rainbow. It was such a more clean and melodic singer. For me, when he joined Rainbow and his solo career, he turned into a more heavy metal singer, more raspy, aggressive. But the Elf albums are so enjoyable for the music, and in my case, I enjoyed too much listening to Dio before Rainbow. So I have the records actually. So when I was deciding which song to play, I said, “Okay, it’s gonna be Elf for sure”. I was between “Carolina Country Ball” from the “Carolina Country Ball” album and “Happy” from the previous record, because it was more challenging. But anyway, “Carolina Country Ball” is one of my favorites, and also the people can watch in my social, I post a video like a year ago with my guitar playing the song with my finance singing and I’m singing because it’s one of my favorite songs, I would say. I have a lot of memories with that. So it was very easy when the way you say, “Okay, it’s going to be Dio, it’s going to be Elf, what song?” 4:23

On picking Kansas and Bad Co. songs that didn’t feature their classic vocalist – Kansas is one of my favorite bands ever. Not too many people know this, but Kansas is actually related to my childhood. Because my father, as I told you before, I was a huge fan of Kansas. When people ask me for my top five top 10 singers, I always mentioned Steve Walsh as one of my favorite. Also, I can say that I sang a Kansas song at my graduation in school when I was 18 years old, so it’s very related to my life. But then I thought at the beginning, I was thinking to make a song from the Power album. It’s more rock and could fit better with my vocal style, but then I thought, “(John) Elefante is such an underrated singer”. So I really want to make some justice to the singer he was and still is, and I say, “Okay, this is gonna be perfect because it’s a great song and he was a great singer” and there are not too many people that know this specific song. Same with Brian Howe. Everybody relates Bad Company with Paul Rodgers, which is great, actually, Paul Rodgers is a favorite singer for Ritchie Blackmore, his favorite singer ever. But then I say, “Okay, Brian, he was such a great singer and he had this great song that fits perfectly with my vocal style”. I believe if I put this song without saying that it is a cover song, the people who really believe that I wrote the song because it fits perfectly with my vocal style. 7:26

On picking songs that hold a special memory for fans – I really want to relate the fans and the people who are listening to the record with my feeling as a fan of music. It happens the same to me when I’m listing to a song on the radio or in all the records is like, “Oh, how much I love this song”. When I listen to a song on the radio from Survivor, I think “Oh I love this song”, I really want to the people to have the same feeling listening, this record. It’s not a typical thing. Everybody is thinking, “Okay, this guy is gonna sing Survivor, he’s gonna sing “Eye of the Tiger”, everybody knows “Eye of the Tiger”.” But I really wanted to have this feeling like, “Oh, I love this song, I remember”, and to bring a memory as I did. So that’s the main reason. 9:35

On radically reworking “All Along The Watchtower” – Actually, it was an idea from Alessandro, the producer, Alessandro DelVecchio. I told him, “Okay, we’re gonna do this song because it’s one of my favorites”. Actually, I was thinking about the Jimi Hendrix version first, because my fiance and I, we are freaky fans of Jimi Hendrix, and we are all the time listening to “All Along the Watchtower”, and we were watching movies about Jimi Hendrix, and every time we are in a city and there is a poster of Jimi Hendrix, we buy it and we have our posters on the wall. So we thought, “Okay, I really want to do this one, but the original song is from Bob Dylan, and then Jimi Hendrix and many other versions, so I need to do something totally different”. In this case, in this specific case, not on the other phones because the other songs were (not covered as much), but this specific song, it was too much covered before, so I say, “Okay, we need to do something different”. Ale came up with his more metal idea. For me, it was perfect. And also because I brought for this specific song on the guitars, the guitar player is a Chilean guy, is a friend of mine, and he’s the guy who we put our first band together when we were 14 years old, and we were playing that song together when we were teenagers. So I called the guy and I said, “Listen, I’m doing a solo record with covers, and I’m gonna play this song and I want you to play this song with us because I think it’s gonna be a tribute to my beginnings”. So that’s the reason. 11:12

On the Michael Schenker tour – I will be back with Michael in the States in the fall. 13:34

On if he keeps in touch with Ritchie Blackmore –  I’m in the way we are normally, we keep in contact not very often, because obviously, Ritchie is a very insolated person. But I don’t think there’s gonna be any plan in the near future because the pandemic was way complicated for obviously for all the music business, and now it’s like everything is getting back to normal, but delay two years. There are a lot of shows happening and until it gets completely back to normal it’s going to be a couple of years. So I think Ritchie is not too much into making anything so far. He is focused right now with Blackmore’s Night, they leave an album presently, I think. There’s no plan so far, we were not informed about any plan. With Ritchie, you never know, maybe, maybe in a couple of days is gonna come with an idea, you never know. 13:54

On whether this is the start to a solo career – Actually, the plan is this Raised on Radio is a Volume One.. Very soon is gonna be a Volume Two called Raised on Heavy Radio, so as you can imagine, it’s gonna be covers, but more heavy metal. So you will have more Judas Priest, Yngwie Malmsteen, Black Sabbath Tony Martin era, Manowar, that kind of thing. Then the plan is to go, actually, we are working already on the original songs with my band. The plan is to have these three records, two covers, one original songs, and then to go tour as Ronnie Romero, obviously supporting mainly the original songs, but playing some covers. 15:54