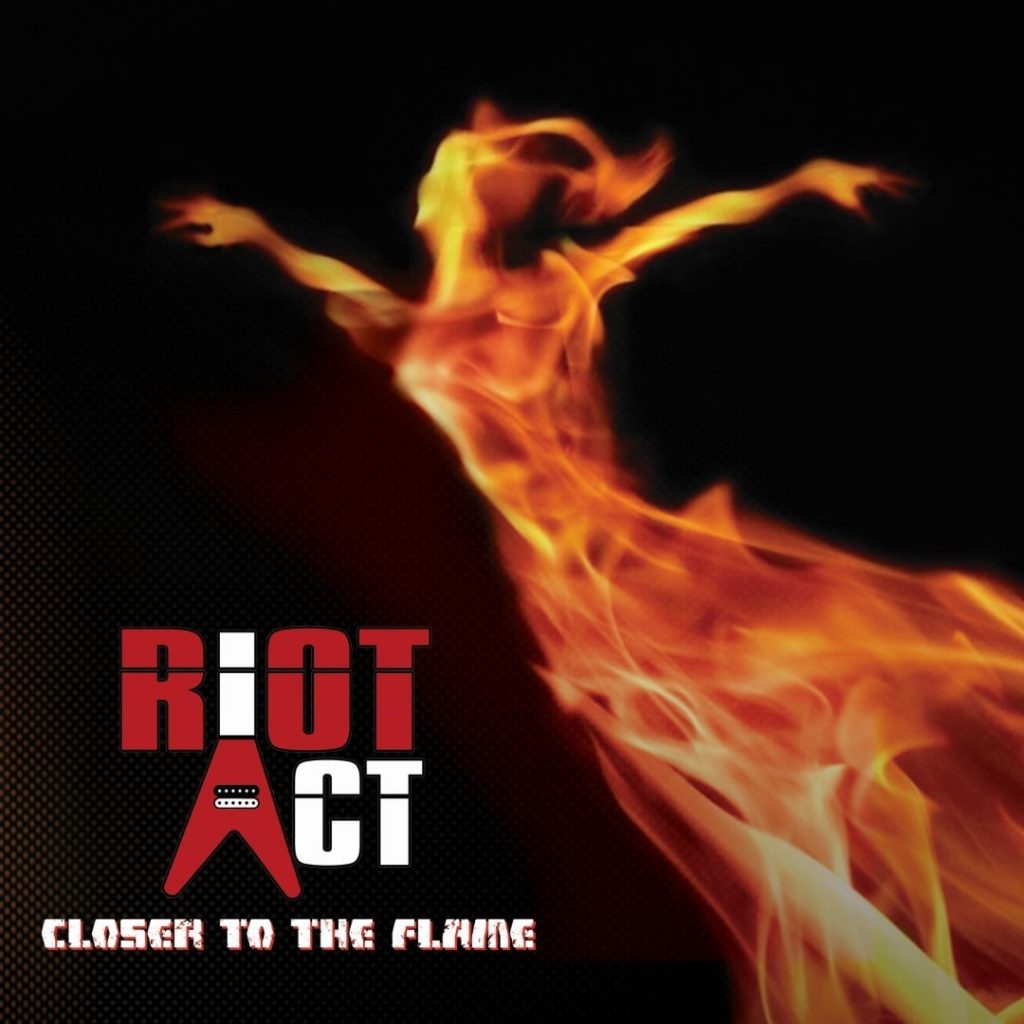 Metal fans no doubt remember Riot, the unluckiest band on the New York metal scene in the ’80s. The guitarist from the classic Riot era, Rick Ventura, is back with Riot Act. Riot Act is a band that plays both original, old-school metal and Riot classics. They just released their debut record Closer To The Flame, and Rick recently took a few minutes to talk about it.

On coming together with fellow Riot guitarist Lou Kouvaris, then losing him to Covid – So much (went on with Riot), there was so much fun and so many hardships from, like you mentioned, issues with labels, dropped by one label, picked up by another, there was always constant issues with labels and management and getting the right members. There was quite a few line-up changes until the right combination of people came together, and most people view that as the Fire Down Under period. but I happen to like Narita. So each album has its own special quality, and I think the playing on all the albums is excellent. It’s a certain sound of each album, a certain sound with those various members. I came in from the second album and throughout the years I remained friends with Lou, we’d run into each other throughout the years. Decades later, we hooked up again. Really, it came about when the Heavy Metal Hall of History inducted Riot. Lou and I were there and we were honored and shocked actually, I guess all these years, the band was recognized. So that’s how Lou and I sort of got together. It’s just non-stop, ups and downs with this band, I’m losing members to tragic death, It’s kind of unbelievable. I just hope it’s over… (Losing Lou was) just so unfortunate, because we were so excited about working together because we never played together, I replaced him and that was it. But we were always friendly to each other, and when we finally got together a few years ago and decided to do this, when we were playing those old songs, we just had a smile on our faces, we just looked at each other and went, “Wow, we sound so good together”, our guitar styles were so perfect, and the songs sounded really good, so we were so excited about the new project. I felt bad ’cause he would always call me or if I run into him, “we should do this, we should get together”. I never followed through. But I’m glad I did it. For a short period, we got to play together, we did a bonus CD on the new record, it is a two-CD set, so the bonus has 12 Riot tunes from the first three records, and Lou’s on there, and we were on there playing together. That’ll be a treat for fans and a tribute to him actually. 1:23

On the other members of Riot Act – The band consists of Claudio Galinski on drums, Paul Ranerie on bass, and Don Chaffin on vocals. And the way the band came out, I was playing with Paul and Claudio at the time, so when Lou said, “Let’s do this project”, I said, “I’m playing with these guys here. Let’s try it out”. So we all got together at my place, in fact, right here, right back there. We tried it out and it just sounded good. There was so much enthusiasm. It’s interesting, Claudio, the drummer, knew about Riot and me. When I first played with him and I was like, “Oh wow”, I was kind of surprised. So he was always a fan and knew everything, he would tell me stuff that I didn’t even know, bands that Riot influenced, he always mentioned Lars (Ulrich) from Metallica and so many other bands, and I was like, “Oh, really? Wow”. So he really opened my eyes to some of this. We all got together and play it sounded so good. Through a friend of Lou’s, we found Don on vocals. That was always my struggle. I had so many ideas and so many songs we had written, and I would always have difficulty in finding a singer that could put them across and it’s just a miracle that we found Don, he just brought everything to life, the old tunes, the new tunes, and it was cool hearing the old tunes updated with modern technology, they sound powerful, so that was kind of cool doing it that reason. 4:58

On whether it was important to keep the classic Riot sound on the new songs – Yeah, I’m really not conscious about doing that, I just write the way I write, I come out with riffs, changes, it’s just in me. That’s the style of music that I grew up on, that’s what I like to play. So I wasn’t like, “Oh, let me try to recreate what we did there”, because I never want to do that, this is just my style of what I do, and this is the kind of music I like, and this is how I play, and that’s all it was. It comes across in the bonus CD when we do the Riot stuff because obviously, I played on that stuff, so it’s gonna sound a certain way, it’s just updated. Then we started writing originals and recording during the same time period throughout the whole pandemic, we did both. We started the 12 ep, we started that a little bit before the pandemic, but then we finished it during the pandemic. Unfortunately, Lou passed away during the pandemic in March, two years ago this month. So that was just devastating. So we didn’t do anything for many months, but we came back on the wagon and started to write, I just had a lot of music into me, I wanted to get out there, and everybody else wants to play. I’m so fortunate, we’re so fortunate to find Don to deliver these songs because he captures it. He didn’t even know much about Riot, he heard about the band, because we’d ask him, “I could recall “Swords & Tequila”, but he didn’t really know much about the band, so it wasn’t like he was a big fan, “Yeah, I have to try to sound like this”. We auditioned him and he just sounded right, it was just freaky actually. Lou and I just looked at each other, “This is just too good to be true”. It was like heaven. For years, I’m trying to find a singer that can deliver the songs that have been ideas I’ve had, and this guy just appears, the timing was right on the money…(Don) related to them. He really liked the songs. I played him the tunes and he goes, “These are eally good songs”, he really got into them, and he liked Guy (Speranza), and so that was kind of cool, he really respected Guy, he wanted to do justice to the songs. He was very conscious of this because, in the studio, he’d say, “Hey, Rick, how am I doing here?” And it just, it was freaky for me being in the control room and watching him, so he sing a line and I’d go, “Oh my God, this is just too weird”. It just took me back to those days, and it just sounds so refreshed and powerful with the new technology. It was really cool to do that. It just carried over into the new disc. The songs just have that hard rock style that I grew up on and always played. It just comes across. 7:24

On whether he thought about changing the name because of all the tragedy with Riot – I really did not want to go there. And it just started, it just happened the way this whole situation. I guess you can’t get away from the past. I was associated with Riot, so it’s always gonna be there. So people are gonna say, “Well, hey. Oh, you in Riot. So let’s hear some old Riot stuff”, that’s just the way it is. At times I just didn’t wanna go there and just not even reference it, but I had to. It just happens. So that’s just the way it is. When Lou passed away, I was like, after losing Guy, Rhett (Forrester), Mark (Reale), and Lou, I was like, “Oh, this is a continuation of this. Maybe I should not be doing this”. It enters your mind. Everybody liked the name of the band. Everyone said, “You guys were really good. I like what we heard”. We had performed at the Heavy Metal Hall of History two years ago, the only time we ever played as a band, and if you wanna catch it, it’s on Amazon Prime. So we do two Riot songs on that, we sounded good and it was so much fun to play because we hadn’t played and we still haven’t performed live since then, due to the pandemic. So we decided to continue with the name and we decided to continue just as a four-piece, so we didn’t get another guitar player and try to emulate what was because I just don’t like to do that. I said, “Okay, this is an original band, this is what we do, and of course, we’re gonna play some old Riot songs, but we’re gonna go as a four-piece band and we’re just gonna sound the way we say them now”, and that’s what the new record’s about. 11:49

On the difference between Riot act and Riot V – It’s different periods. In fact, I wanna mention Mike Flyntz the guitarist from Riot V, appears on the bonus disc. So he plays on “49er”. We asked him to play because he was a really great guitar player, and really nice guy, we’re friends with him. I was fortunate, they had asked me a few years back in 2016 to perform at Loud Park in Japan, a big festival, and we performed the Fire Down Under album, the entire album, and that was a blast. They had asked me to do it. So it’s started from that and the induction into the Heavy Metal Hall of Fame, that sort of brought it to life, it just sort of just happened, it was kind of weird. But they’re great guys, a great band. Mark continued the band in a much heavier direction and Riot V continued after Mark’s passing. The way that was is Mark’s father actually wanted the band to continue because they were touring. So that’s the story with the band. Fans, I think, will like both eras of the band. But yeah, it’s just, it’s like Deep Purple, there are so many incarnations of Deep Purple, and some people, “Oh, that’s not really Deep Purple without Richie Blackmore”, but luckily, we get along, who knows, we might even do dates together in the future. It’s an interesting history of the band, very unusual. 14:54

On the Riot seal mascot – Well, at that time, I think the mascot was a big thing. I don’t know if Iron Maiden started it with Eddie. We came at about the same time period, and our managers had come up with the idea and it really was not the band’s idea. They came up with it, and so that’s how that happened when they just got bigger and bigger and it took over the entire album covers, so that’s really how it happened. 16:56