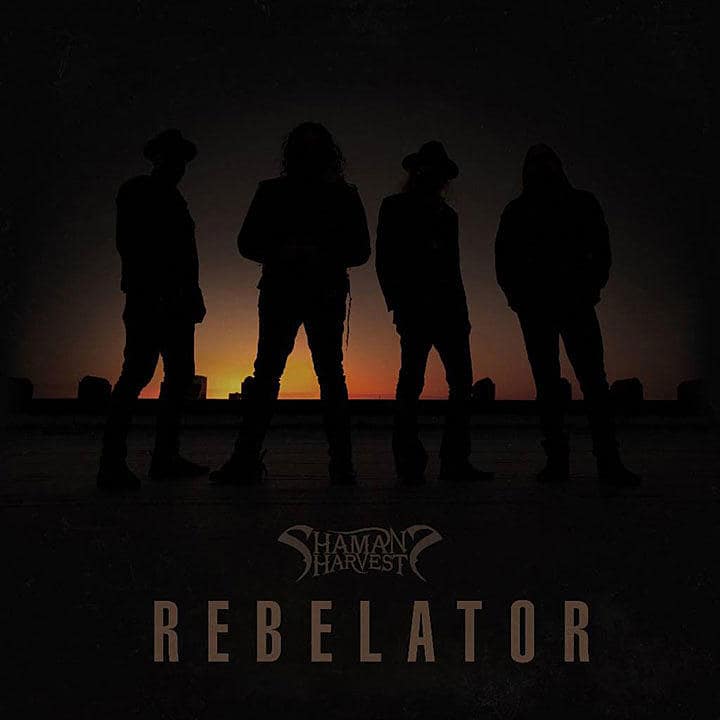 Shaman’s Harvest has been a fixture in the rock scene for nearly two decades. They have just released their seventh record, Rebelator, and are hitting the road to support it. Recently, vocalist Nathan Hunt took some time to talk about the new record and upcoming tour.

Please press the PLAY icon below for the MisplacedStraws.com Conversation with Nathan Hunt –

On if it feels like 20 years since the first record – No, it doesn’t. It does feel like we’re still a new band. Every record that we do is a different cycle, and it’s almost like you’re a whole different person, it feels like to me anyway, every time we do one of these things. Who we were a record ago, which is a completely different band. :37

On the strategy of releasing singles throughout the year prior to album release – Well, it wasn’t really necessarily planned. The record took so long to come out, we’ve been sitting on this record for two years, we were chomping at the bit to release something. So that’s part of it. The other part is how people release records now is different than it was when we released our last record. People want to be gratified immediately, so we try to give some tracks that probably aren’t necessarily singles, maybe, radio singles or whatever, but that still kind of represent what the record is for us. So yeah, it’s kind of a new strategy for us, but I think I like it because also the benefit to this is it gives people some time to either hate it or fall in love with it. Sometimes what we do first listen because songs are so different from song to song, people are kind of taken off guard, so it gives them time to appreciate this work that we spend all that time doing. 1:52

On whether the band is ever concerned with genre – I’ve never understood the need for people to identify a thing. It is a thing that people really want to do. It hurts us in the sense that maybe we’ll get put on an Apple metal playlist all the time, and it’s like our lease metal song always that does that. Some people are looking specifically for a metal song, and it’s not. So it might hurt us in that sense, but the benefit for us is it keeps it fresh. We’re literally just capturing the mood of our day when I’m writing a song, or several days depending on how hard it is to write that song. So it’s true. It’s honest. So I think it keeps it more honest, it’s probably not the best business model, but we didn’t go to business school. 3:43

On whether they appreciate a fan base that’s willing to let them experiment – Oh, for sure. It’s funny too because those fans will be the same fans that are going, “Well, I hate that new song, it’s nothing like their last record”, but you’ve come back a month later and you see another comment from them or something, the first rule of the internet is don’t read the comments, sometimes you can’t help it, but there’s a new comment saying, “I take back what I said earlier, this is actually my new favorite song”. So there’s passion, they’re passionate. Which we can appreciate. Otherwise, why do it? The passion always shows whether it’s positive or negative feedback. As long as you’re passionate, I don’t care. 5:21

On what he listened to growing up – Everything, the Delta Blues really got its hooks into me as a young person. But everything from (John) Coltrane to Black Sabbath was played at my house. So the record collection my parents had was a wide range, and records were always playing. I think it’s probably, definitely contributed also, I think probably the biggest contributor to our sound is when we first started, like most bands, we were doing four-hour sets at the biker bars or whatever, playing covers, and then sneaking your own stuff every once in a while. We played everything under the sun to play there, from what was modern at the time to the classic rock stuff. So that kind of really helped mold, learning how to perform those songs on stage, they kind of molded how we write. 6:24

On whether he writes all the time or specifically for a record – Absolutely at the moment, absolutely. I try to write from time to time on tour, but I’m the type of person I have to compartmentalize who I am as a performer on tour, as a singer, songwriter. They almost seem to be in two separate worlds for me. All of us in the band wanna give our complete selves to each one. It’s kinda hard to fracture the mind like that, I don’t have that kind of skill. So what’s happened in the past with most records we do is we walk in, there’s maybe just a minuscule line of a melody and maybe like a rough idea of a guitar riff, and we write, and then record it right then and there, and you capture the passion and all the things that haven’t had a chance to be rehearsed out. This record, we just wanted to see what kind of songs would ride if we really took pre-production and really demoed the songs and found out what works, what doesn’t work, what sounds forced, what’s natural all those things. So this time around we really took the writing process kind of extreme. We took a year off to do it. 8:02

On starting their tour before the record comes out – The only new stuff that we’re playing is the stuff that’s been released at this point. I think that absolutely helps familiarize the concert-goers, and also it’s gonna be cool because we can see in real-time that the record is gonna come out in the middle of the tour, so we can see in real-time what kind of response that’s gonna be from the fans directly, and not just behind a computer. 10:13

On planning further touring – You’ve got to plan, kinda plan for the worst. We’re trying to figure out a co-headlining tour in April. So maybe we only take a few weeks off, then go back out. If it happens, I’m almost gonna be surprised at this point, but we hope that it does. 11:02

On if they used the pandemic delay to start another record – Initially it was like, “Yeah, we’re gonna wait, finished the cycle before hitting them again”. Because Covid hit right when we’re finishing the record, we’ve had plenty of time to write some stuff, I’d say we’ve probably got half a record worth of ideas that are worth recording, there’s 10 times the amount of songs that don’t need to be on a record, but we’ve probably got about half record of worthy songs. 12:01

On if they prefer festivals or their own shows – I just like playing to people. I do love surprising people. That’s one of my favorite things when you can see it dawn on their face. They start out and they’re like, “Who is this?” and then, “Okay, I get it”. That’s kind of a cool thing. I hate festivals for the fact that you have, as a performer, you have like five minutes or under to get all your gear up on stage, working, plugged in, ready to go, and it never works out. Usually, you’re without a guitar player or something, something is wrong, so that’s kind of the bummer. It’s just a stressful kind of day as a performer, but there’s an energy level at festivals that are pretty, pretty insane, that you don’t have in clubs anymore. But the intimacy of clubs is pretty much, you can’t beat that either. Both have strong suits. I’m not an either-or kind of guy 13:14