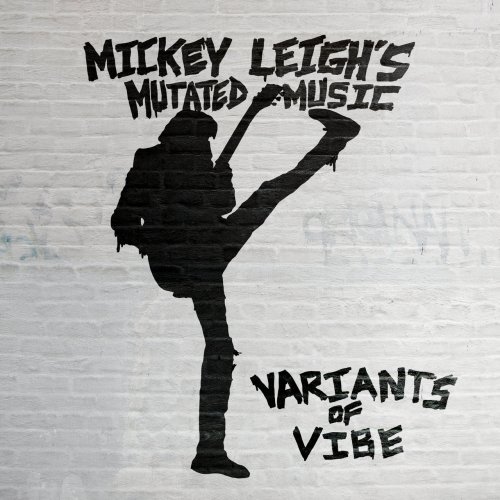 In the NYC rock scene, Mickey Leigh is a lifer. Mickey started making music in the late 1960s with a band made up of guys who would eventually go on to play with Mickey’s brother, the future Joey Ramone, as The Ramones. He recently released his first record as Mickey Leigh’s Mutated Music called Varients of Vibe and took some time to talk about it.

Please press the PLAY icon below for the MisplacedStraws.com Conversation with Mickey Leigh –

On putting together the band for Varients of Vibe – I just played everything except the drums, not good enough at that yet. My bass player, Wes (Crawford), the bass player that I had playing with me now, wasn’t here yet. He was still living in Florida, but I don’t know if that would have made a difference at that point. I just wanted to get these songs recorded. I just figured I could play all these things, I started out as a bass player. I was in a band before the one you mentioned with John and Tommy when I was 10 or11 years old. At 12 years old, we actually recorded this single, the band was called Purple Majesty. We actually, my brother, he took us into the studio, he was 16, acting as the producer, and that. We recorded a single that was put out by Norton records a few years ago. :50

On if the songs on this record are new or have been around – Both, they’re a combination. Some of them were songs that I started writing. I don’t know, last millennium. Sometimes you start writing something and you just don’t wanna put it out, something doesn’t feel quite right. Then you move on to other things, and that song gets kind of left on the back burner, and so some of those I just finished, and others I just started. 2:22

On working with Steven Van Zandt and Wicked Cool Records – I’ve known Steven since the ’80s. He used to do some things in clubs in New York City, and we became friends. Back then, he was friendly with my brother, a friend of the family, so I’ve known him a long time. I was involved with other things after my brother passed away, and a lot of work on this behalf, get his solo album out, so I didn’t get to my own stuff for quite a while, but when I did, I got in touch with Steven. He said, “When you’re ready, send me the stuff: First he just wanted to put out singles, and then he decided to put out the whole album. 3:11

On if Steven worked on the record at all – He was too busy. He’s a little busy to work with me. I would have welcomed it. But to get back to your first question, doing everything yourself, you can kinda go faster, you don’t have to show somebody what bass parts or have different opinions with a producer. You know what you wanna do and you do it. So it goes faster and sometimes easier, and it’s a different kind of experience, but Steven didn’t work or do any production. 4:06

On recording during the pandemic – When the pandemic started, I remember, I’ll never forget that day, walking out of the studio March 13, 2020, and that’s when the lockdown happened. I walked out of the studio in Manhattan, I live in Queens, the city was just dead quiet and after that, the studio was shut down, everything was shut down for a long time, but it didn’t quite matter. I had things recorded already at that time, then we went back later. 5:01

On going solo after always being part of a band – It’s pretty much the same as I’ve always done. I just decided to not have it appear as a band yet, but hopefully, it will. I don’t know, I’ve just always been more comfortable in the band setting and having my name upfront, but it just seems to make sense this time around, more beneficial even for the band. It’s Micky Leigh’s Mutated Music, then hopefully will be able to drop the Mickey Leigh and just be Mutated Music. 5:56

On the early days of the CBGB scene – We were used to playing in crappy clubs, but this was the crappiest of them. But it was like being in your friend’s basement really, at that time down there. Nobody was really watching. You didn’t feel nervous about it, there was hardly anybody there, and it was not much was expected of anybody or anything. So nobody really knew what was coming, everybody was casual. 7:09

On the camaraderie of the bands then – Of course, a little competition. There always is going to be, “Why is this getting to go third when we have to go on fourth?” Things like that. But that was a camaraderie I’ve never witnessed since which is unfortunate for a musical resurgence that hasn’t re-occurred since then. I lived through two of them and one in the ’60s with the British Invasion and then the punk thing in the ’70s, but it’s kind of unfortunate that nothing like that has happened since, but I don’t know if the environment is conducive for something like that to happen again, everything is a little too formulated…There were a lot of bands playing in clubs, there are a lot of bands giving demo tapes to labels. One way or another, you had to find a way to rise above to get the attention of people. You always have to try to find a way to get attention from people because there are so many other bands, whether it was just pre-internet or now, in that respect, it’s the same, but it is a lot harder now to find a way to grab people’s ears. 8:17

On the relationship between members of the Ramones – I really don’t want to go there in this interview. That’s a whole different topic than the album and the band. 10:42

On if he knew Pete Davidson prior to his being announced as playing Joey Ramone in the movie based on Mickey’s book – No, I didn’t know Pete. I had just seen him on Saturday Night Live and thought, “This guy seems like one of my old friends from Forest Hills”. He seemed like the guy who lived down the block. But I’m hesitant to talk about that as well because I’ve been around the block with this a few times already, with the Fox Searchlight. This looks really good. Look good that it’s happening. They’re working on the screenplay. I’m hopeful it will go into production, but I don’t wanna commit myself to much more. 11:05

On the status of the annual Joey Ramone Birthday Bash – In the process of trying to decide what to do about that right now. So, I don’t know, I spoke to a few people last night, just to feel it out to see if people were willing to travel. I was hesitant to ask people to come. If started working on that thing, I would have started like in January, trying to throw the net out to see who might come and you have to reserve the date at a club well in advance, so I didn’t know, things are so uncertain, I just didn’t know. So I’m kinda behind the time clock already with that. I don’t know, I’ll see. Not sure. 12:13

On if he will be putting out more music in the future – Absolutely. As I was saying, we call it Mickey Leigh’s Mutated Music now, but hopefully soon just be Mutated Music and keep it going. I love these guys I’m playing with. I’ve played with Pat, my drummer, for 25 years, Wes and I were in a band 30 years ago and stayed together on and off, throughout all these years, we’ve always kept in touch. There’s true mutual respect and fondness that we have That’s rare, the thing they call chemistry, so I think I’m hopeful for the future. 14:20