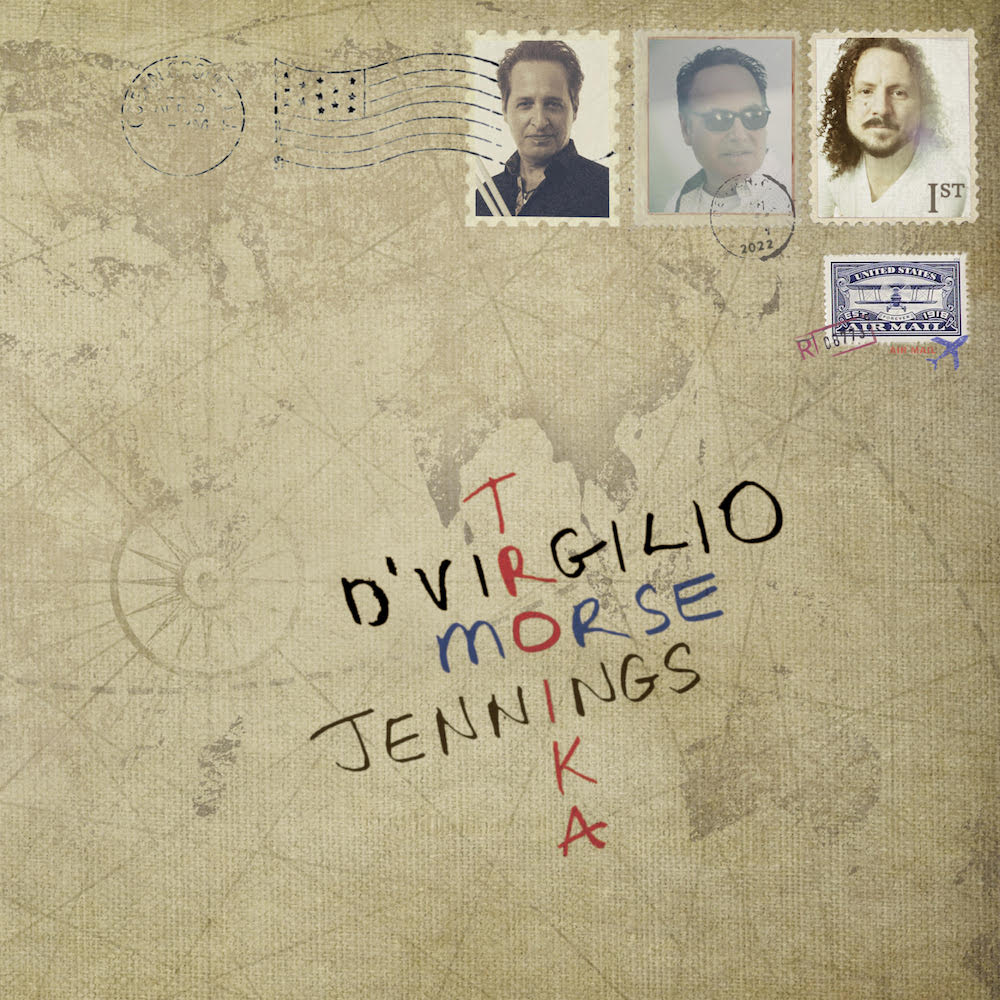 A Conversation with Nick D’Virgilio of D’Virgilio, Morse & Jennings

Nick D’Virgilio is one of the most versatile performers in music. He has been a world-class drummer and vocalist for bands such as Spock’s Beard and Big Big Train, and a guest musician for many of the biggest names in progressive rock. He has now reunited with his former Spock’s Beard bandmate Neal Morse and Haken Frontman Ross Jennings to release Troika, a new record combining lush vocal harmonies with mostly acoustic-based music.

Please press the PLAY icon below for the MisplacedStraws Conversation with Nick D’Virgilio.

On bringing Ross Jennings in to join him and Neal for Troika – We both known Ross for quite a while, and I’m a fan of Haken for sure. I’ve seen him perform a bunch of times, and we’ve been on a few of the same festival gigs and stuff where they played. So it’s always a good time watching that band play because they’re incredible at what they do, and Ross is a really great frontman. Neal asked me about this project, if I’d be interested in doing something like this three-part harmony sort of acoustic-ish kind of project. We didn’t know exactly who the third person would be at the very beginning, we had a couple of ideas, and then, maybe Neil’s friend, Jeff, I forget exactly who…but someone recommended Ross and we went, “Well, that’d be really cool”. Neil reached out to him before I did, and Ross was totally into the idea as well. Ross just released a solo record, so he’s kind of doing stuff that’s not like Haken, it’s more singer-songwriter kind of thing, so it seemed like it would be a great melding of three artists to get together and do some singing. :56

On his reaction when Neal proposed the project – I was into it right away. We kind of go back a long way doing this kind of singing. Me, Neil, and Alan (Morse) after Spock’s Beard gigs would always sit in the bus and sing CSN and Beatles tunes all night long, and Neil’s been doing choir and three-part harmony stuff with his family for a long time. It’s kind of in the blood a little bit, and I’m always up for trying something different in doing something out of the box a little bit, and I’m always trying to become a better songwriter, and I’ve been practicing a lot of fingerstyle guitar playing lately just to do something to add to the vocabulary and things like this. It was like, “Yeah, let’s go for it”. So when he asked, I pretty much wrote the first song for the project right away because it gave me some good inspiration. I wrote the song, “You Set My Soul on Fire” pretty much right after he asked. It was a nice kick in the pants to try something out. 2:37

On his approach to drumming for Troika – Well, it depends on the song, it depended on the song. Some were way pared down than others, like the song “Second Hand Sons” is pretty much a rocker. Neal thought it would be good just to have a song with a little bit of oomph compared to everything else, so that’s just a full-on drum song. The other tunes, it gave me the opportunity to grab percussion instruments I haven’t used in a while too, lots of little chachskis and little shaker elements and different things. So it’s fun to experiment with certain percussion instruments that I don’t normally use a lot. 4:06

On using all of his different musical styles on this record – That’s a good bit to put. Yeah, I think so, because it tested my songwriting chops, it tested some of my vocals that are different than what I normally do, production ideas and stuff like this. So yeah, the vocabulary that I’ve built over the years, kinda help make this record. 5:11

On creating such a complex vocal record during the pandemic – We never saw each other in person. In fact, we’d never even heard the blend of the voices until well into the process of the whole thing. We’d send our demos to each other, Neal wrote four songs, and me and Ross wrote three each for the record. So we would send our demos, and I sort of produce my demos a little more than others. Neal would just send an acoustic guitar and voice kind of thing, and mine might be a little bit more involved. We knew the voice-wise, Neal has the lower range, Ross can sing really high, like me, I’m kinda used to singing the high parts like I did in Spock’s back in the day, so we knew what we had. Me and Ross would take the high parts, middle and high, most of the time, not every time, but most of the time, and Neal would be the bass and the meat of the vocal trio down there. I think “Everything I Am” was the first tune we heard with the three guys singing together, and I was like, “Wow, okay, this is working”. For my tunes, I knew the harmony parts that I wanted to hear, and I sent the guys and I said, “These are the notes, you guys do it your way, and then let’s see if you have any changes you wanna make, just let me know”…It’s easier today than it was in the past. Now you can do a part and send it to the other guy, even in England, and he can get it in 10 minutes and do a part on his end and send it right back. Even just five, six years ago that took a lot longer to do. Now it’s a lot easier to kind of work on tunes that day, and I hear things back and forth almost immediately. 5:59

On if they discussed influences prior to recording – I think we knew we didn’t wanna have it all sound like Crosby, Stills and Nash. We knew there were gonna be some things in there. Neal is a big fan. Neal is very influenced by some of those tunes, I am too, but he definitely, even probably more than me and Ross. Lots of Beatles influences, of course, definitely the early Yes harmonies and things like that. Early 70s, sort of acoustic singer-songwriter music, anything from James Taylor and just all of that kind of stuff was sort of in there. We wanted it to be a variety as far as sound, not just kind of everybody thinks,” Oh, this sounds like CSN”. So we kinda knew that going in, but we also knew that some of it was gonna have that tinge, which is okay because it’s great music. 8:18

On if this is a one-time project or if it will continue – I’ve already put my hat in and made my opinion known about playing live…you gotta do it. I think it’d be a really fun evening of music. So I sure hope that we can make this happen and get out there and perform this music. We’ve already talked about making a second record, Neal’s up for it, and I’m sure Ross is too, and it’s just a matter of getting the schedules together and start throwing some demos back and forth and seeing where it leads. But I sure hope it keeps going. It was a really enjoyable process to make this record, turned out well, so it’d be nice if we can see where it goes…I’ve been talking to a few other people interviewing me and stuff, I think the prog-heads will dig this record. I think there’s enough “museoishness”, if that’s a word. That kind of flavor in the songs will appeal to the prog fan. Some are really straight ahead and mellow, don’t get me wrong, but I think it’s just the production, it sounds nice, some songs are more involved. A couple of Ross’, tunes, “King for a Day” and stuff, to me are very prog. they got that museo flavor there for sure. So I think there’ll be a lot that a traditional prog fan would dig 9:22

On releasing a new Big Big Train record and moving forward after the tragic loss of David Longdon – It sucks, really. I’m not sure how else to put it? We’ve been pushing this record since last September. We had this whole PR campaign, we were trying new things to build followers and get some more air time out there in the world because there’s a ton of music. We had this campaign of releasing all these singles. This record’s been done well before David’s accident. Then when it happened, yeah, gosh, it was like…after the initial shock of a couple of weeks, we decided that, even Sarah, his partner, decided that we should keep moving forward with this. Typically, you say when a person kinda goes, He wouldn’t want us to stop”, which I think we all really, truly believe that and then we also wanted to make sure his legacy sort of lives on and not just kind of stop and go away. He added so much, he was the soul of the band, his voice was the voice. We didn’t want that to just disappear because of this. It’s been a huge drag, lots of emotions for everybody, but it’s really nice also to see that people are digging the music that we put out here and they’re enjoying this record. 11:35

On following up his 2020 solo record Invisible – I was already working on a lot of stuff, but now since the change in Big Big Train the calendar is gonna change a little bit, I think. But to answer your question generally, yes, I’m definitely making more solo music. I wanna get out there and play more, I wanna get out there and tour on my own. Lots of ideas and things that are percolating. Big Big Train, we’re definitely gonna keep going as a band. David just had his funeral, so now that we’re sort of on the back end of at least that part of it, we can kind of look towards the future a little bit, slowly, that’s gonna take a little bit of time, I think. We’re pretty eager to not let all the momentum just completely go away that we’ve been building all these years. So yes, more solo material, the timeline is gonna change a little bit depending on what’s happening. 13:13