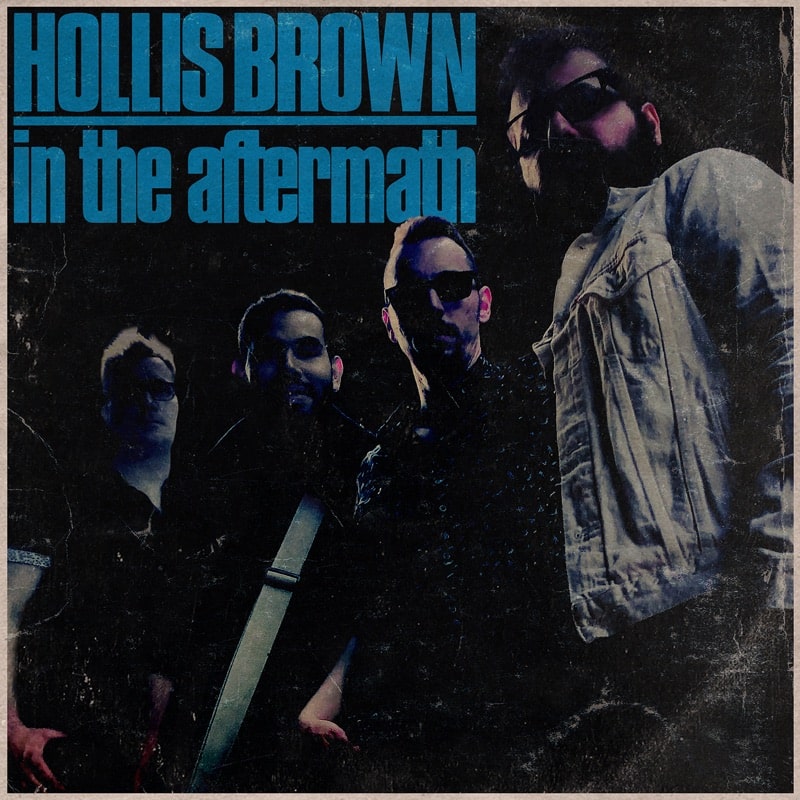 Hollis Brown is one of the great American rock & roll bands of the 21st Century. From records like Ride On The Train and Ozone Park to their incendiary live performances, their love of ’60s rock always shows. Once again, the band has looked to these influences and decided to cover a classic record end-to-end. Having covered Velvet Underground’s Loaded in 2014, they have now taken on the Rolling Stones with In The Aftermath. Vocalist Mike Montali recently called in to talk about this new release.

Please press the PLAY icon below for the MisplacedStraws.com Conversation with Mike Montali –

On if the pandemic changed their plans following the success of Ozone Park – Actually, it did. We did the whole album cycle in 2019, which was basically eight months on the road and much press and the whole circuit of it all and it was great. We were about to start, we were doing a lot of support touring around the record, we’re about to start a headlining run for the following year where we really wanted to just headline in places and do our show as a headliner. That kind of got derailed as well as plans to get in the studio and record another original album. So, we took the time to really just focus on writing and we still are writing, we’ve written about probably fifty or sixty ideas of tunes and we’re narrowing it down just to see. We’re all in a very different personal and professional place than we were at the beginning of the pandemic, like most people. It’s a natural thing and that tends to happen with the band anyway, not to mention the traditional kind of thing. So we’re just trying to figure out the sound of the next thing. Throughout the pandemic, thank goodness we have a loyal great amazing regional fan base around New York and we were able to go and do some private, super small outside shows, and at one of them, somebody said, “Cn you do an album front-to-back?” We said, “Well, what are we going to do? We can’t rehearse anywhere because there’s nothing open”. So we picked the Aftermath album by The Rolling Stones, which was one of the first albums that me and Jon (Bonilla) were listening to when we started the group, along with The Velvet Underground’s Loaded and bunch of others that we recreated also. So, we did the gig and it was awesome and a lot of fun, and it went well. We just said, “You know what, we know it, maybe we should just record them again and it could be like a little follow-up to The Velvet Underground Loaded thing we did a few years back”. So we got a studio for a day and we tracked it all live all in one day just running the tunes like a band should and unexpectedly, that’s our next release. That’s kind of how it’s happened.

On if they worry about fan reaction to rerecording classic albums – Yes and no. I think we intentionally decided not to choose the most famous material. So I think that that helps. It doesn’t sound just like a karaoke band. We intentionally picked a record that has a lot of material that probably the average person has no idea even exists. So in that way, it’s easy to weave it and kind of make it your own because when people are listening to it, they don’t know every song. So it’s not like you’re playing “Street Fighting Man”, “Sympathy for the Devil”, “Brown Sugar”, blah blah, the list can go on forever. So we picked material that maybe people didn’t know so they can discover it themselves in a way and I think that that’s part of the exciting bit of the project.

On how they narrowed the Stone’s catalog down to Aftermath – It narrowed down to Aftermath mainly because of the tuning. As Keith Richards developed, a lot of that Stone’s stuff is open tunings and different types of guitars and stuff like that. So, with the earlier stuff, they are a band that’s trying to find their own voice in a lot of ways. So it’s a little more straight-ahead performances and that was a big factor in us choosing Aftermath. Those two things, really, the fact that a lot of the material is not very well known. I mean, it’s known, but it’s not their biggest hits, other than maybe one or two songs, and the fact that it was also an opportunity. Brian Jones adds so much to that Aftermath record with all those world instruments he does. So, it was easier to maybe reimagined that than some of the other ones, which are a little more straight-ahead and, and kind of like what we do naturally. So hearing a song like “Lady Jane”, which is primarily on the dulcimer. If you remove that dulcimer it gives you an easier way to put your spin on it.

On developing the arrangements for the record – Our creative process was basically, like I said, we did this during a pandemic, so it wasn’t like we were able to even be around too much. We basically said, “Let’s learn all the songs and learn all the important lead parts”. “Lady Jane” still has (the main riff) so we still do that but we do it on an electric guitar. So it was definitely like let’s learn the truth of the song. We need the lyrics, we need the melodies, we need the chord progressions and we need the main melodic parts, but the best is the rest is kind of open to interpretation. “Paint It, Black”, the beginning of it on the Stone’s album is very tom-heavy. It’s almost like a different kind of rhythm and Andy (Zehnal), our drummer, played it on the hi-hat and like a rock beat. There wasn’t really much discussion on it. It was kind of learn the song, make it your own and we’re going to vibe it.

On what attracts the band to 60’s-era NYC – Well, I think it has to do with the songs of that era. We’re all fans of many different types of music, and many different types of things. But when we come together to play as Hollis Brown, it’s the stuff we all relate to and vibe on. So I think that those things are are the main things. It’s really the Golden Era of popular music where the most popular music was also the music that was pushing the boundaries like you don’t see that today, right? Like the most popular things are often just created for commercialism. Whereas back in 1965 you had Rubber Soul coming out, Blonde on Blonde, that era I think Blonde on Blonde might have been ’66. Those groundbreaking achievements in song and recording and performance, they were happening. and also the most successful records of the year. I think that we want to be in that lineage of just great, American rock bands, who focus on songs and can play live and that’s something that matters to us. That’s why being historians almost are telling the story of rock and roll through us, whether it’s our band name or some cover records we do or even in our original music and style, that matters to us to kind of keep it going because it’s a very finicky thing that can vanish.

On keeping the momentum built during Ozone Park – It’s been tough, not going to lie about it. It’s definitely presented obstacles. There’s always there are enough obstacles already when you’re trying to get something off the ground in a creative project. But I think we’re like a family in a lot of ways and we don’t always get along and we don’t always see eye-to-eye, but we know that it’s going to exist in some way. S0o maybe it’s just it’s ever-evolving and we know that we’re going to be playing in some capacity. So we just kept that mindset and it’s like we’re just going to keep playing as often as we physically can. We just have that mentality of playing when it works and it seems to me that still be working to a degree. So we’re still doing it when we can.

On writing the next record – Well, everyone’s getting involved in finding the performance and sound of the tunes, but the writing typically still comes from me and Jon in a room with a couple of acoustics thinking, “This is the song now, let’s take it there with the group and it’ll morph into Hollis Brown” But the writing itself and the spark still starts with me and Jon with a couple of acoustics and figuring it out before we present it to the group. Then it evolves and changes and some things that we think sound awesome when it’s just us don’t sound as great and we throw it away and vice versa. Some things were like, This is kind of cool. Maybe it could go somewhere. It’s not great”, then it blossoms into something awesome. Once you get Andy in there with an idea. But that’s kind of the way we work.