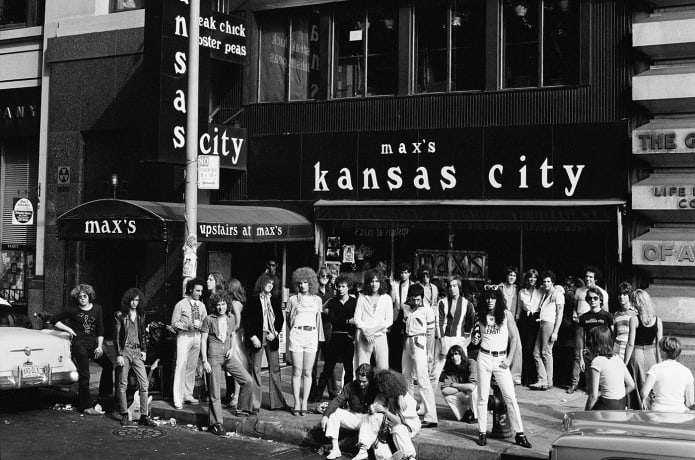 Simply put, there is no New York City music scene in the late ’60s through mid-’70s without Max’s Kansas City. From art to glam to punk, it all began at Max’s. Filmmaker Danny Garcia is returning to the site to talk about his new film Nightclubbing: The Birth of Punk Rock in NYC and brought along one of the legends of Max’s, Jayne County.

Please press the PLAY icon below for the MisplacedStraws Conversation with Danny Garcia & Jayne County:

On what led to a documentary on Max’s Kansas City – Danny – Well, actually everything started like seven years ago when I got a call from Tommy Dean and his daughter. Tommy was the second and last owner of Max’s and he watched my documentary on Johnny Thunders and he wanted me to make a documentary on Max’s. He started telling me about the counterfeit money operation he was running in his basement that I found out was fascinating. But he passed away. I told him I need money for all the music rights that I’m crowdfunding for today. Some of the ideas disappeared when he died and stuff. Then I got this footage of Sid Vicious live at Max’s and it’s amazing. All my life I’ve been told it sucked, the shows were terrible and stuff, and this footage proves the opposite, we were actually really hot. We have to say that it’s actually footage from the very last show, so they were cooking by the last Saturday night they played there or whatever. I tried to do something with it regarding Sid live at Max’s and I started interviewing people, but the interviews were lame and sad and didn’t have any juice or rhythm to them. But then when people spoke about Max’s, it was the opposite, it was really exciting, fabulous stuff. So I thought, “You know what, let’s make a documentary on Max’slike Tommy Dean wanted and we’ll see what I do with this Sid stuff later on”. I’m including some of the footage of Sid live at Max’s as well as Jayne playing, The Dead Boys, Elliot Murphy, all the stuff. We’re basically telling the story of Max’s, how it started in ’65, how it became this rock and roll venue in 1969-70 with The Velvet Underground and the first shows that Danny Fields brought over there with the Stooges, Alice Cooper, and stuff. How it all happened from there with the New York Dolls playing there and everything. That’s what we’re doing. 1:10

On the crowdfunding campaign – People can go to IndieGoGo, and they can participate donate from ($11) to thousands. For ($11) you get your name on the end credits and you enter this raffle where we’re raffling an item from Stiv Bators, which is a PVC holster that was donated by one of his friends in Paris, and then you get DVDs, Posters, T-shirts and all sorts of stuff. Basically, we need this money to help us pay for the photography, footage, and music rights that we need to complete this film. 3:58

On how Jayne first went to Max’s – Jayne – Leee Black Childers, the photographer, took me to Max’s for the first time. He was photographing Jackie’s (Curtis) wedding, one of Warhol’s superstars who starred in Flesh. She was getting married to the maitre d’ at Max’s and so (Leee) went to film it, and then, of course, he didn’t show up for his own wedding. Poor Jackie was stranded at the altar, so she grabbed somebody else and married him. She wanted to be married, it didn’t matter who. Then after the marriage ceremony, everyone went to Max’s. Leee told me all about it, and he brought me to Max’s for the first time. The very first time you go into Max’s you’re intimidated. You really are. You don’t know what’s up. People looking at you, trying to figure out who you are, what you are, and what you’re doing in there, and people also could be very vicious and nasty, some of them. So I was very intimidated, but once I got broken in, I practically lived there, I was there practically every night. 5:07

On covering the two eras of Max’s (pre ’74 glam, post ’75 punk) – (The film) covers both scenes. Because a whole punk thing starts with the New York Dolls and Suicide, the Stooges playing there, so we had to obviously cover the first incarnation of Max’s, when Mickey Ruskin was running it as well otherwise the story doesn’t make any sense. I DJ’d both eras. I was a bit different. I thought that during Mickey Ruskin’s period things were a little more serious minded because you had a lot of artists coming in there, serious artists, and they were hanging out in there and it was a little more serious. People were a little bit more reserved. But then when Tommy Dean’s Max’s came along, all hell broke loose. It was just rock and roll hell, decadence galore, people fucking in the telephone booth, it became an outragous place to hang out. All the band’s hung out there, everybody from the Dolls, I was hanging out there with my band and people that would come in to town, like Bowie and people like that, and they would come to hang out at Max’s. I think most celebrities in the rock world when they came in, in the New York City, Max’s was probably number one on the list to go to. 6:30

On the diversity of the Max’s crowd – Max’s was a very diverse crowd, you had everything, you had snobby rich people hanging out with drug addicts and you had boys and girls and boy/girls and all kinds of people. It was diverse. You had everything. It wasn’t a gay club, of course, but gay people were welcome. As long as Mickey liked you, if Mickey didn’t like you then no matter what you were he was not gonna let you in. So you really had to be nice to Mickey. At one time it was kind of a war between CBGB’s and Max’s, if you played one place you couldn’t play the other. It got really bad, but then it got ironed out. If you played CBGB you weren’t expected to play Max’s for a long, long time and lots of jealousy between the two clubs occurred. What sparked it was when I had a fight with Dick Manitoba on the stage and he got injured. We had a big fight at CBGB’s and people divided up between the Max’s crowd and the CBGB’s crowd, between the Wayne County crowd and the Dick Manitoba crowd. That added to the turmoil in both clubs and the whole scene. The whole scene suffered because of that. People thought the scene was like that, people jumping on stage and beating each other up. 9:50

On if Max’s could have continued into the ’80s – Jayne – Max’s was truly unique and I don’t think that it could have gone on really. Maybe another new owner could have come in and made it into something else. They tried to resurrect Max’s a couple of times, the had a Max’s Kansas City Uptown, and it worked for a couple of months but it just didn’t catch on at all. 12:18

On what was the biggest thing he learned from making the documentary – Well, basically, the fact that Tommy Dean ran his counterfit operation from the basement. I just thought that was brilliant. Max’s was super important because not it not only brought the Warhol scene and The Velvets and the Dolls and stuff, the punks, but also on the hard core scene I started developing a Max’s before CBGB was accepting it. People like Bad Brains, The Stimulators, Reagan Youth, all that stuff, Heart Attack, all those bands were playing Max’s and that developed the New York hard core scene before Max’s closed in December ’81. The story is really fascinating, the volume of culture that we’ve gotten, that the world has gotten because of Max’s because of how wild it was, how wild the bands that play there were. It’s changed popular culture way before CBGB’s existed. But the thing is, Max’s disappeared and then MTV happened, and then CBGB’s was elected the House of Punk and that it’s partly true, but then Max’s was before and was the genesis of all of that. I know Max’s from Johnny Thunders’ album Live at Max’s Kansas City, then the Velvet’s Live at Max’s Kansas City, it is really a legendary place. It’s cool that it’s not forgotten, everybody knows CBGB’s but the new generations don’t have a clue of what Max’s was. So it’s a very interesting story really to tell. 12:18

On playing a gig there – My first gig there was during the Mickey Ruskin period with my band, Queen Elizabeth. We played there and we were just very excited that we were gonna play Max’s. We had a great crowd, all sorts of people came to see me. like Steven Tyler, Alice Cooper I think came to see me and a lot of big names cam to see me. I started really getting a name out there, because of playing Max’s my name started to grow. People started to hear about me more and write about me more. I think one of the reasons that Max’s could not be duplicated today is because it was so diverse and everyone got along with each other inside of Max’s. They could be viscous and nasty to each other, but that really was a sense of being together there. The story of the backroom at Max’s, you didn’t dare walk out of the backroom at Max’s with your back to the crowd because they start talking about you saying horrible things. So you backed out of the room. 15:28

On keeping in touch with people from the scene – So I keep in contact with Peter Crowley, who booked the bands at Max’s during the Tommy Dean era, and I keep in contact with was all sorts of people like Donna Destri, and quite a few others I used to catch up with have passed on, unfortunately. I’ve managed to keep track of a lot of the people. I think it’s really important. It’s kind of like Woodstock but it’s Max’s. 16:55

On the NYC premier which can be purchased through the crowdfunding campaign – The idea is getting people like Bob Gruen, whoever is around, obviously, Donna Destri, the locals, I hope they will attend and help us out it. It’s gonna be an interesting event for sure. I think I’ll be able to (attend). I Don’t travel the way I used to. I used to travel a lot, but I can make short trips and that sounds like a important one to go to, I think I’d like that. 18:00