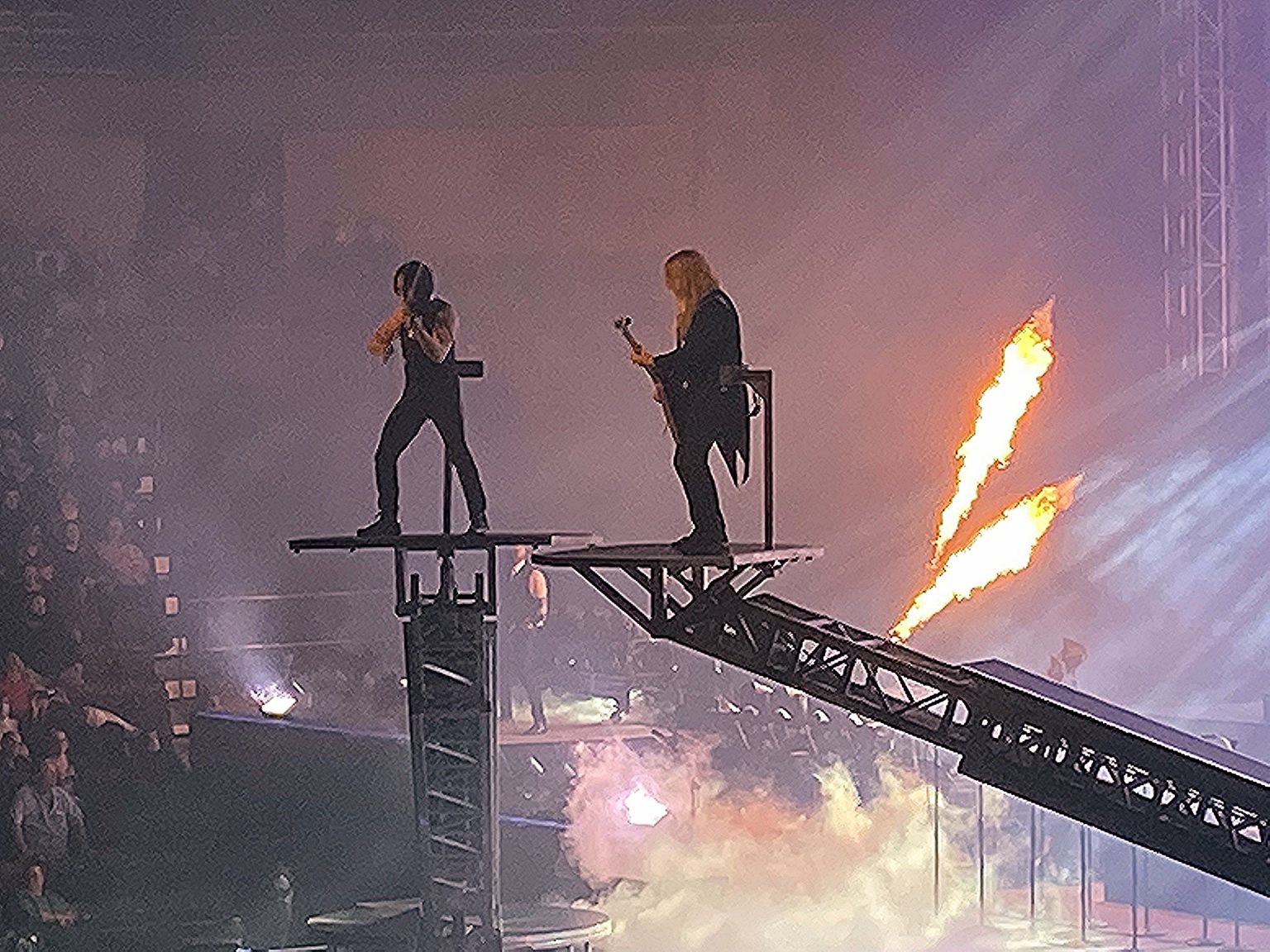 For years I have avoided giving an “official” review of a TSO show. There are many reasons but the biggest being that my love for this band would make it nearly impossible to remain objective. I was there throughout the Savatage years, there at the Beacon Theater in NYC in December of 1999 when TSO was just a few lights and a fog machine. I’ve interviewed at least six current members of the full (East & West) band. But most of all, I was lucky enough to count late bassist David Z and his family as friends. With all that weighing in, this year felt different. After having last year’s tour sidelined by the pandemic and now celebrating the 25th anniversary of the debut record Christmas Eve and Other Stories, it felt like time to share my thoughts on the show. I will add one caveat, due to virus protocols, the band did not allow photo passes for the show. Usually, the photos that accompany concert reviews on MisplacedStraws are taken by me from the photo pit, for this review, they are cell phone pictures from our seats.

While no one wanted a year off, it seems like the band was totally reenergized and reinvigorated as they took the stage. A brand new opening sequence featuring the Savatage track “Welcome”, sung by Zak Stevens who also sang the original version on the Wake of Magellan record. In my opinion, this was one of the best opening sequences in TSO history. The new staging was a feat of engineering that featured moving lifts and lighted panels as well as TSO’s trademark light show.

As narrator Byan Hicks began the tale of Christmas Eve and Other Stories I started to think that “constant motion” is the theme of the night and the band. Constant motion on the stage, huge set pieces moving all around, colored balls moving through the air above the crowd like Christmas ornaments, the band members never standing still. Constant motion within the band, dealing with tragic losses, including founder and guiding light Paul O’Neill, overcoming a pandemic shut down, constantly moving from city to city in a brutal schedule, all to bring unbridled joy to the people in the audience. Nothing has slowed this band and, under the creative eye of lighting designer Bryan Hartley, the staging has grown and evolved beyond what any other band has shown.

Over the years, TSO has used each of its Christmas-themed records as centerpieces for its annual trek. None of those records has been performed more than the original, Christmas Eve and Other Stories. After so many years of performing this classic, you would think there isn’t much room for innovation. But, once again, constant motion. The vocal power in TSO is second to none and for this tour some slight changes were made as to which vocalist sings a particular song. Most notably, the incredibly talented Robin Borneman stepped into the spotlight on “Old City Bar”, taking over the song from Zak Stevens. It’s the slight changes like this that refresh the show and make it feel new. Another new twist is that vocalist Dustin Brayley appeared as a third guitarist for most of the show. Previously, the extra guitar was only used on a handful of songs.

Luckily though, some things do stay the same. Sir Russell Allen once again owned the first half of the show with his rendition of “This Christmas Day”. For me, watching him perform that song transcends just a mere concert. The power of Allen’s voice as he tells the story brings you through your own Christmas memories, reminds you of your loved ones, and reminds us all that even after everything the world has experienced the past two years, there is always hope.

After the emotional conclusion of the first half, as original guitarist Chris Caffery says, it’s time for some fun. As usual, the second half of the show was filled with some of the band’s greatest hits from their Christmas and non-Christmas records. The second act of a TSO show is a kaleidoscope of fire, lights, stunning performances, and yes, constant motion of the ever-evolving stage.

Over the past few years, TSO has begun looking to its roots a bit more. Each year a never-before-played track from the original Savatage years has been featured in the show’s second act. This year, the ballad “A Little Too Far” from the 1991 release Streets: A Rock Opera was chosen. I will admit to being a setlist watcher, so when I saw this track, my first thought was Zak Stevens would get the vocal. To my surprise, long-time vocalist Kayla Reeves stepped to the mic. As much as Russ Allen’s performance was the highlight of Act 1, Reeves’s emotional performance of this stunning track may have been the highlight of the night. She took the track to a new place entirely. It now belongs to her just as much as original Savatage vocalist and TSO co-founder Jon Oliva.

After missing last year’s tour due to the pandemic TSO did have to put some precautions in to protect the band members and crew this year. I mentioned no photo passes, but there were also some changes to the show itself. In previous years, guitarist Caffery and violinist Roddy Chong would run through the crowd on their way to lifts in the rear of the area, this year there was no entering the crowd. TSO has always been known as a band that appreciates its vast fan base and has always taken time after the show to meet fans and have a signing line. However, this year that simply wasn’t possible. Even with those precautions in place, there was barely an empty seat in the house. The fans needed this band this year just as much as the band needed to play. It is truly a symbiotic relationship like no other band has with fans. Once you’re sucked in, you can’t imagine a holiday season without this band. They are a holiday tradition and treasure. Three generations of my family enjoyed the show on Sunday and as the last flame died down from the stage, the Christmas season officially began.