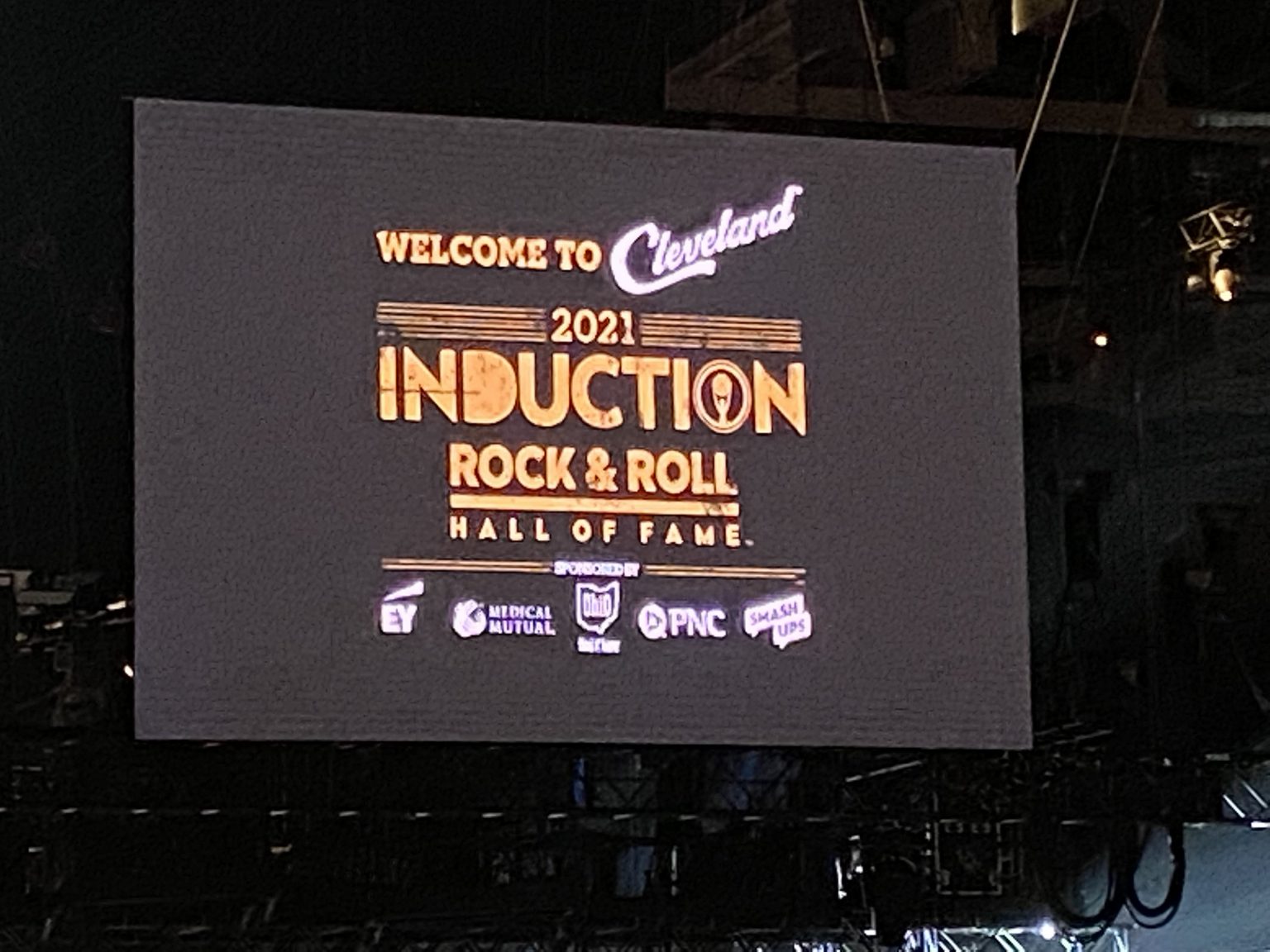 The show started about 15 minutes early with Hall President Greg Harris giving his welcoming remarks. During his speech, he quoted Tom Morello’s Kiss induction by saying how all the nominees have “impact, influence, and awesomeness “. Harris was followed by Chairman of the induction committee John Sykes, a position formerly held by Jann Wenner who was roundly booed every year. Sykes was actually met with cheers and, in his speech, quoted Ice Cube’s acceptance speech that “rock & Roll is the spirit that connects us all”.

The two introductory speeches ended right at the 8:00 start when Taylor Swift took the stage with a slow, sparse rendition of “Will You Still Love Me Tomorrow?”. It was a little underwhelming and led into the video of Carole King’s career. Taylor was back and gave an excellent induction speech, it’s clear she has been a fan all her life and it makes for a great speech. King gave a heartfelt acceptance and was clearly moved by the moment. She introduced Jennifer Hudson for an absolutely amazing version of “Natural Woman”. Although King’s induction was as a performer, Hudson’s performance was far more reminiscent of Aretha Franklin’s version of the song. Finally, Carole King took to the piano, joined by the LA session musicians featured on Tapestry, Russ Kunkle, Leland Sklar, and Danny Kortchmar, for “You’ve Got a Friend”. It would have been amazing to see her play with Swift and Hudson, but overall a strong start.

Next was the first surprise/disappointment of the night. Ringo Starr was announced as the person to present Billy Preston with the Award for Musical Excellence. The disappointment was he was on video. A quick video speech, no acceptance or performance. A precedent for the special awards all night.

Hall of Famer Dr. Dre from NWA was up next to induct LL Cool Jay. Dre gave a funny, personal speech showing that the two men share a long history. After the speech was the video then LL stormed the stage with a band behind him. He tore through “Rock Around the Clock” with a snippet of “Go Creator Go”. After a brief “Goin’ Back To Cali” was a huge surprise, Eminem came out for “Rock the Bells”. As LL wound down “I’m Bad”, the second surprise came, Jennifer Lopez came out for “All I Have”. The performance ended with “Mama Said Knock You Out”. It was a totally energetic performance that had the crowd on its feet. One of the best of the night.

Another video induction next, Tom Morello sent in a video inducting the late, great, Randy Rhodes. Again a brief video and nothing else.

Angela Bassett came to the stage next to induct Tina Turner for her solo career. It was a good speech on content, but Bassett treated it as a movie role and was way overdramatic. It lacked any personal touch because of the drama. After the video on her career, Turner appeared in a pre-taped segment accepting her award. The first performance was a somewhat ragged but ultimately successful duet between H.E.R. and Keith Urban on “It’s Only Love”. Bryan Adams was supposed to be there but due to a positive COVID test couldn’t make it, Urban took his place at the last minute. Next up was newcomer Mickey Guyton doing “What’s Love Got To Do With It”. While Guyton is a great young talent, she was swallowed by the moment and gave an uninspired performance. The downturn was remedied by the incredible Christina Aguilera killing it on “River Deep, Mountain High”. It was fantastic, but Turner was going in for her solo work, she’s already in for her work with Ike Turner, so a solo song would have been more appropriate.

Lionel Richie was there to induct Clarance Avant. It was a good speech, but never really said who Avant is or exactly what his contributions were. The video after did a great job of explaining it. Avant himself was there to accept his award with humor and charm.

Yet another video induction was next, Hall of Famer Patti Smith inducted her friend Todd Rundgren. Rundgren’s feelings on the Hall are well documented and the video presenting him ended with Todd saying if he was ever inducted he would not show up. There was no acceptance or performance.

The great Gary Clarke came to the stage for a brief induction of Early Influence Charlie Patton and gave a solo guitar performance of “High Water Everywhere “.

Back to the video for Pharrell to induct Early Influence Kraftwork. A very good video history followed but no acceptance or performance.

Finally, one of the huge moments of the night, Drew Barrymore out to induct the Go-Gos. Barrymore was fantastic, a total fangirl speech that included pics of her as a girl with the band and replicating the iconic Beauty and the Beat cover, complete with towels and face cream. After the video, the band launched into “Vacation”, “Our Lips Are Sealed”, and “We Got The Beat”. They sounded a little off at the start, Belinda Carlisle was clearly nervous, but they found their stride by the end. Each member gave a brief acceptance speech touching on a different area. Kathy Valentine gave a brief history, Gina Shock thanked their families, Carlisle thanked various business partners, Charlotte Caffey thanked the record company and Jane Weidlin thanked the producer of their documentary, Allison Elwood.

Common was on video next to induct Gil Scott-Heron with an Early Influence award. The usual biographical video, no acceptance or performance.

The annual In Memoriam was next, followed by a beautiful performance by Brandi Carlile of “All I Have To Do Is Dream” as a tribute to Don Everly, a member of the Hall’s inaugural class.

The video screens lit up as former President Barack Obama gave a brief, funny induction of Jay-Z. That was followed by a fairly long video featuring a countless amount of stars reciting Jay-Z’s lyrics. That was followed by a second induction speech, this one in person by the controversial Dave Chappelle. It started off funny but began to ramble. There wasn’t much of a personal connection in the speech. A lengthy video followed before Jay took the stage for his acceptance. Beyoncé was nowhere to be found as the camera panned to Jay-Z’s mom. His speech was very long (something he admitted to) and felt a bit self-serving. It lacked the humility and appreciation seen in other speeches. When it finally ended he left the stage, no performance by him or tribute by anyone else.

Finally, THE moment of the night. Sir Paul McCartney takes to the stage to induct the Foo Fighters. Was it the best speech? No. But he did draw parallels between his career and Dave Grohl’s which actually made a lot of sense. After the video, the band launched into an explosive medley consisting of “Best of You”, “My Hero”, and “Everlong” which was just the shot of rock the night needed. Each member gave a brief speech with Taylor Hawkins advocating for inductions for George Michael, Jane’s Addiction, and Soundgarden. The night ended with McCartney joining the band on vocals for “Get Back”

The show went about 4 1/2 hours long but did have long stretches without performances. It was disappointing to have so much done on video and so few inductees performing. This was the first induction at the Rocket Mortgage Field House, previous Cleveland inductions took place at the more intimate Public Hall. While the venue was large, in my opinion, these nights are more special in an intimate setting, it was still better than the cavernous Barclay’s Center where the New York inductions take place. My only complaint about the venue was the stage lighting. Our seats were direct across the floor from the stage, giving us a straight-ahead view. The way the stage was lit, however, from our vantage point the people on the stage were often in darkness or shadows. Overall it was a really good night and made the most of what could be done during a pandemic. On to 2022!