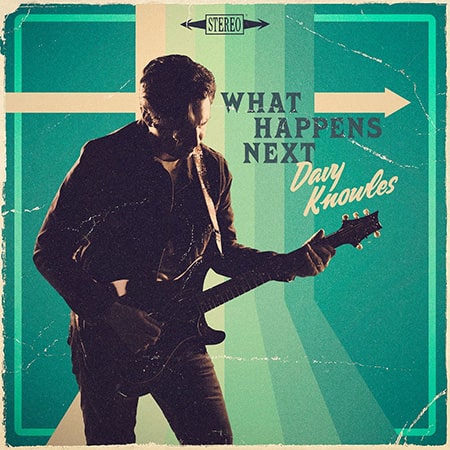 Although still in his early 30’s, Davy Knowles has been part of the blues scene for almost 15 years. He has taken his British blues influences and evolved them into a modern blues guitar style that is unlike any other guitarist out there. His new record, What Happens Next, is out October 22 and he recently took some time to talk about it.

On incorporating more rock into his blues style – I’m a fan of all sorts of different kinds of music, kind of everything and anything. Sometimes I feel like I kind of boxed myself into my own little corner, and this was a great opportunity for me to really stretch out and try some different things and try and maybe kind of work with some of those dead influences that maybe I haven’t displayed before. But on the other side of it, my kind of writing approach is always been a bit haphazard. I just tend to kind of write whatever comes out and then try and make sense of it later. The was naturally the process and it seemed a little more eclectic than other records…I’m a gathering. A bit of courage to actually write in that style. I’ve been listening to a lot more modern stuff that I have done in the past and I think that probably does shine through a little bit.

On the members of his backing band for the record – Andrew Toomes on keyboards Jeremy Cunningham, on drums, and Todd Bowers on bass, all Chicago-based guys, just magnificent musicians. I always loved that Mark Knopfler quote, “Always try and be the worst member of the band. But if you write the songs, then they can’t fire you”.

On if he was influenced more by the English and Irish bluesmen than American – That was really my “in” and then I kind of worked backward from there. It was John Mayall & The Bluesbreakers “Beano” album that that was my first introduction to Blues. My first introduction to guitar was was Dire Straits, but that “Beano” record was so important. I’m sure your listeners know, but even from just an educational point of view, the first track was an Otis Rush track and there was a Freddie King track, there’s a Ray Charles track, a Robert Johnson track on there. So even just from studying the liner notes, there was a huge collection of music that you had to go and grab. Peter Green’s Fleetwood Mac and Rory Gallagher from Ireland, there was definitely a more English kind of approach to it and then I’m kind of figuring out where they got it from.

On the newer generation of Blues players evolving the genre – I love that aspect. I think preserving and protecting is equally as important, but I also think that as a folk music it has to progress and change and roll forward and become accessible to a whole new generation. Look at The Black Keys. They wear their influences really on their sleeve, really honestly, and they’re playing arenas to a lot of kids and this is fabulous. That’s absolutely brilliant. Son House versus Muddy Waters, it’s the same folk music but it’s evolved and it’s progressed and it’s changed. The technology of electric guitars, all of this stuff. I think it’s important to do that.

On what he learned about his songs by redoing them during the pandemic – I really didn’t remember a lot of it. I had to go back and learn so much. Songs that you forgot about and maybe more personally for me, songs (where) I’d forgotten what it was like when I was writing or when I’d recorded it. I’d forgotten those moments. So, it was wonderful to go back and remember all of that.

On his upcoming touring – I’ve always loved the idea of, taking Rory Gallagher for example, he always played an acoustic set either right at the beginning of the show or in the middle. Just to break it up and just something fresh for people’s ears and your own ears. It would be lovely to incorporate some of that and some of those different versions in that way.

On what he’s learned from sharing the stage with legends – Anything you can. The humility. Someone like Peter Frampton who’s taken music as far as you can go with it in this world. He’s still so humble and such a lovely chap and just genuinely in love with what he does. I think that is inspiring, just from a human level, from a musical level. All of those guys are just so inspiring, so incredible and you try and watch their stagecraft, you try and watch note selection, what they’re going for impact, and things like that. A lot of the time, it’s more careful. It’s more slow. It’s not what you think it is. It’s a lot more just deliberate and I think that’s a really wonderful, wonderful approach. I think ultimately it captures people at the right moment and provokes an emotional response. It’s just it’s inspiring to watch that side of what they do.

On what happens next – I don’t really know. Again, it goes back to that haphazard thing, I’m just going to try and write whatever comes out and make sense of it later. I’ve always enjoyed songs. I’ve always enjoyed textures and layers and things like that, look at Dire Straits. I can’t really answer that question honestly, because I’m not sure myself. I’m really proud of this record. I’m really proud of what we’ve done and I’m looking forward to playing these songs live and also looking forward to sitting down and and and writing, I love writing so I don’t know what will happen next.