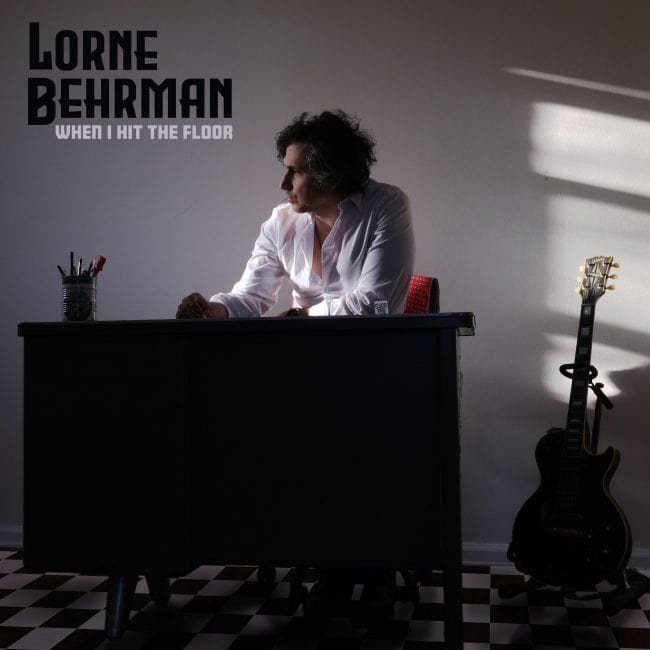 New Music Showcase: Lorne Behrman, When I Hit The Floor

Lorne Behrman has been a fixture on the NYC music scene for quite a while. After appearing on the fantastic debut from The Sweet Things, he is launching his own solo career with his new EP When I Hit The Floor. I recently caught up with Lorne to talk about the record, playing live, and the cathartic effects of music.

Please press the PLAY icon below for the MisplacedStraws New Music Showcase with Lorne Behrman:

On going solo after always being a “band guy” – The short answer is that it was kind of an accident. My last band, The Sweet Things, I’m friends with those guys now, but they actually kicked me out of the band about two years ago, a little under two years ago. I find myself for the first time without a band, I’ve been playing music for 31 years. I just kind of wrote these songs and sent to a friend of mine. He dug him and it just felt natural to kind of do them. It was supposed to be just like a little thing to showcase my guitar playing for a future band, show I can do these different styles. I just kind of found I really loved it and I love singing and writing and just kind of doing everything, just kind of grew out of there.

On the NYC rock influence of the record – It’s like a CBGB compilation. All those artists, those were the albums that I played guitar to when I was getting my playing together. Ron Wood is my favorite Stone and one of my favorite guitar players. It’s funny, when I did this record, initially, like so much of my music, I kind of sat down and thought, “Okay. I want to do a Johnny Thunders thing”, and this was like, “I just want to play these songs, no one is even going to hear them”. It’s like the first time in my life that I just kind of accidentally was myself and by being myself as a product of my influences. So as I was sending out the music, I didn’t know where it would live. I thought maybe people wouldn’t like it that liked my previous work. Some people notice the CBGB feel to it and I’m so grateful because that’s my home. I make 70s rock and roll CBGB, Faces, Stones thing.

On keeping the 70s vibe but still sounding modern – That was really important to me. I’m forty-six. I grew up in an era where you didn’t want Lo-Fi production. You wanted to be in the studio, but all you could have was Lo-Fi cuz you were in a garage or basement and couldn’t afford more than an 8-track. So, I really wanted it to be clear and modern. I also love modern music. You don’t have to have a secret love of Lo-Fi or be part of a special club to like it. As far as the guitar parts, every note I played on this record I like recorded on my phone and I practiced it to a metronome. I wanted to make sure everything has some meaning to it. So I really wanted to be clear and articulate because I feel like in the bands I’ve been in and things I’ve been in before it was more messy things got buried. I wanted it to be clear, modern, I wanted people to feel and also wanted very lean instrumentation.

On the intensely personal lyrics – In the last 7 years, I’m forty-six now, I was married and then I got divorced. I really hit a bottom with substances and really lost a lot of things. I’s kind of like a little concept EP. The first song is about me getting sober, the second song is just about the feeling of I won’t fade away. I don’t want to be one of those guys that just kind of became, “Whatever happened to that guy?” That third song was dealing with being molested as a kid. The fourth song, I was sitting in my daughter’s room at one point and I just realized that I spent so many years wanting to not be here and wanting to die, and I was realizing, “Please, God, give me time”. I’m kind of feeling happy now, I feel like I found what I’m supposed to do. So it’s kind of like this four-song movement about my life. To put out stuff that I’m not trying to be anything. I’m not trying to be cool. I’m trying to be myself and people like it, there’s nothing that feels better in my life. It’s the best feeling ever and it is cathartic. It’s a little bit messy to share child molestation, that was a single and that was very hard but it resonates with people and that’s what I want to do…I tell you I had a lot of nightmares leading up to doing the video and then putting it out. I really struggled with putting it out there and the reception because when the first song, “When I Hit the Floor” is more upbeat. Even though the lyrics are kind of sad, you can get behind getting sober. (“Sandcastles”) is a darker song. I really struggled with it, I struggled with telling my parents about this and sharing it with the world, and my daughter. Ultimately I felt like, when I used to drink, I used to say, “I want to like help people heal from this if they’ve gone to the sexual molestation”, but I could never do it in the daytime. I think I was scared but I was like, “I have to put this out there”. So sometimes when you’re scared that means you have to do something, and that’s the way I felt.

On when these songs were written – None of these songs were for any other bands. I have a folder of songs for all the bands I’ve been in, unused, unheard songs. These were just ones that I felt… I have a limited voice, I have a style, these were the first four songs that came to me after being kicked out of my band, and where I was in my life, being sober looking at my life, those were the first four. They’re not tied to any style or any other previous music dialogue I’ve been a part of.

On his band for the October 17th show in NYC – I’m really lucky. I have Hector Lopez on drums and Hector was in my last band, The Sweet Things, he’s an excellent drummer and we toured together and I love him. He played on the EP. I have a friend of mine Ricardo Rodriguez, who is a really great hired gun bass player. I’ve known him for about fifteen years. I’ve done some hired gun work I did work with him years ago. Then on keys is Rob Clores and Rob was in the Black Crowes, he plays with Jesse Malin, he played with The Sweet Things and he’s a wonderful person. My friend Paige Campbell from the band How Tragic is going to be singing some harmony lines with me.

On the future – I have a full-length album written, not recorded. I wrote like forty songs and I have it down to ten songs. I’ve been practicing them in my room and just kind of getting them all, all kind of polished. I’ll be playing the entire EP (on October 17) plus four of the songs that will be on the full-length album. I want to tour, I want to record, I wanted to keep doing shows. This is kind of like an announcement of a larger era of my musical life, and I guess my personal life too because this is who I am.

A Conversation With Sam Hariss & Dave Tierney of The Sweet Things