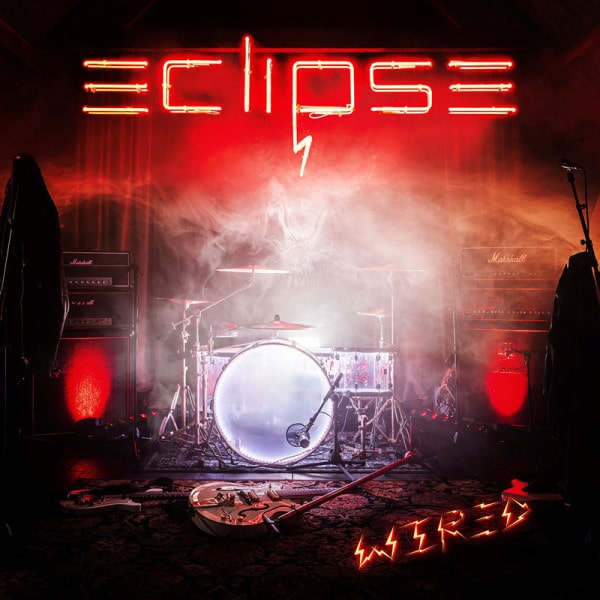 Over the last decade, Eclipse has emerged as the leader in the world of melodic rock. They released a live record, Viva La VicTOURia, in 2020 off the huge success of their Paradigm album. Now they are back with a new release, Wired, and frontman Erik Martensson makes his second trip to the site to talk about it.

Please press the PLAY icon for the MisplacedStraws.com Conversation with Erik Martensson of Eclipse –

On whether Eclipse felt pressure to follow up the success of Paradigm – Not really, I think the worst critics in the world or the hardest critics in the world are the band itself. No one is harder to persuade on songwriting and recording, but I think it was important that we didn’t write a song that sounded anywhere like “Viva a Victoria”. For me, that was super important that we didn’t do anything even close to it that. I think if it wasn’t a hit single maybe we could have continued right in that style, but we were like, “Oh, I know I can’t do it anymore”. 1:45

On if the Wired songs were written after the success of Paradigm – I think maybe we played the ballad “Carved In Stone” at one of the last gigs we did, I think it was at Oslo in Norway, we did one gig, and I think I played like a super simple demo of that song at that period. but other than that, everything was written during the pandemic and after the live record. 2:58

On evolving the Eclipse sound on Wired – It’s kind of funny how it turned out. You can discuss and you can have these plans for how a record should be before you do it, but the result is never what you planned it to be. Somewhere along the way, I thought this is gonna be a really pop record almost, but then when I listened to it, the final mix when it was done, this is a proper rock and roll record. It’s hard rock, it’s so much energy, but somehow I just imagined that it was very, much more pop than it was and kind of surprising to myself, and I’m super happy with the result. I think the sound, the mix, the whole energy of the band is great, I think we’ve never sounded better on a record…it feels fresh for me as well. I got the CDs and the vinyl and the cassettes delivered to my house yesterday, and I realized I haven’t been this excited about looking at the final product since 20 years ago when we got the first CD, I was super excited. think. I almost feel the same way about this one. 4:00

On the Van Halen sound on “Bite the Bullet” – I have the Van Halen flanger. The Van Halen flanger’s signature button, I think it’s the Unchained sound. That’s the best setting on the whole pedal you can tweak the knobs any way you want, once you put that Unchained button on its sounds perfect, it sounds like Van Halen….(Eddie Van Halen) is the greatest, not only as a guitarist but with gear. I think few guitars in the world have taken guitar playing forward in such a way, everything from guitar style to the instruments to the amps to everything is truly one of a kind. 5:41

On if the pandemic affected the timing of the record – We kind of stuck to the plan. When we think about it, I think the original plan was maybe to release it in the spring, like one and a half years after Paradigm. We want to release records quite often because number one, it’s fun and two, it’s good to keep giving new material to the fans. But maybe postponed it until now, just a few months, otherwise, it was accordingly to plan. I think the whole recording of the Wired record, the whole party vibe, maybe he has longed for the pandemic to be over and this is the record we wanted to hear when the world opens up again. 6:51

On playing with a steady lineup – Philip (Crusner, drums) has been with it since 2016, but Victor (Crusner, bass) came in on 2019, so actually, he’s the new guy in the band. This is the first record he actually is involved in recording and has been involved in writing as well. The whole band, we have a really good time together. We’re good friends, and that really reflects on the record. When the vibe is good in the band it’s easy to do good stuff…when you meet up with someone and write together with them, if you’re in the same room, if you would come to my studio and sit down, I would write a different song than I would have done all by myself. Just having a person next to you changes how you behave and write. Just like in normal life. So everyone who’s involved makes an impact, even if I write songs and someone is in the room, I will do something different. 8:09

On getting to play live and upcoming touring – We actually played a big festival in Belgium, it was just over a month ago. It was a proper big rock festival, you had to be vaccinated to be able to go inside or have a PCR test. That was the first show in 17 months. I was really nervous before the gig, but when we ran out on stage for the first song it was like, “I know this is this, I’ve been longing for this a lot”. Just seeing all people together in the crowd, it was so good to see the people having a good time together again…We’re gonna do a release party in Switzerland on the ninth of October in the middle of Europe, so that’s the first gig that’s coming up, but we got some Scandinavian dates coming up as well, later in October and some in Germany during the winter and Norway as well. Things are starting to open up here, so hopefully, we’ll be able to at least do more one-offs, but maybe 2022 is the year when it’s finally going back to hopefully a little more normal that we can do proper tours. We had to cancel a festival in Tennessee that we were supposed to be in October. We couldn’t get Visas or working permits because the embassy’s closed. 10:21

On the future of W.E.T. – I love working with Jeff (Scott Soto) and we have a good time. We’re doing these records together, it’s fun music to write because the only criteria to do a W.E.T. song is that it’s a good song. We don’t have to re-invent the wheel in any way. With Eclipse, we need to be in the forefront in some ways. We have so many (rules), “You can’t do this, you gotta do that”, but with W.E.T. it’s more easy going, so it really is fun and inspiring to write. 14:40