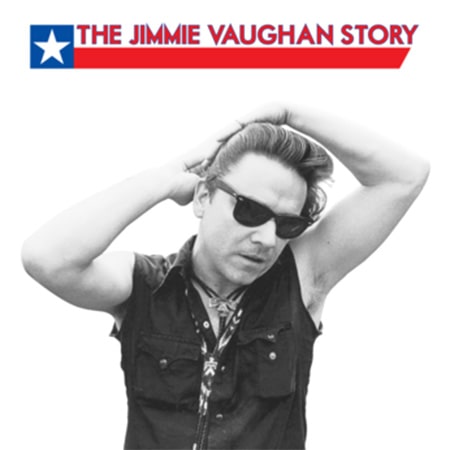 The Blues Fix – An Exclusive Conversation with Jimmie Vaughan

Blues legend Jimmie Vaughan is about to release a 5 cd box set that chronicles his entire career. He recently took the time to look back on his iconic work and share stories about Dusty Hill, his brother Stevie Ray Vaughan, and much, much more.

On the evolution of his style – You can hear it moving along and settling on things and going back. You usually have a head and then in the middle, it’s like an open book, you can do whatever you can as long as you can get back. I think you play what you feel at the time and hopefully, everything’s working physically so you can. You just have to play all the time. You have to play every day, I do, at least some. Then there’s a whole ‘nother thing about playing at the house and playing at the gig, it’s totally different. So, You just got to keep playing any way you can.

On collaborating with other artists – A lot of these people, I’ve known them for many, many, many years. So it’s great to see everybody, it’s like a family reunion every time you hook up. It’s a lot of fun and but it is mostly amazing to meet all your heroes and get to play with them. It’s almost indescribable. I guess I need to sit down and write a book. But, you’re still trying to play, I want to play and play and play…You don’t want to be somebody that you have to sit in with that you don’t like. So you have to keep working at it and it’s really great to play with your friends and there’s always somebody new coming along. Like Gary Clark, when I first played with Gary he was fourteen and he wasn’t tall like he is now, he was shorter than me if you can believe that. But you heard that he had that thing early on. You know what I’m talking about when I say that “thing”. You hear somebody playing and you go, “Ok, they got that thing”, whatever it is.

On whether playing live in different incarnations keeps the music fresh – Well that helps a lot and you’re always looking for the next thing and always (saying), “One of these days we need to play that old song”. You can always do all that and then you have to keep learning stuff too. So it works on all levels. Sometimes I found that if you have several different things going that none of it gets old. So that’s really important.

On what Texas blues means to him – A lot of things that could be, but when I think of Texas Blues, you have everything from Max Lipscomb, Lightnin, Hopkins, all the way up to Freddie King and then all in between and then the new stuff. Texas is so big. There is always the record company in Houston, what was the label in Houston? They had Bobby Bland. There’s always a lot of great blues guitar players from Houston and down there, down there on the Gulf. They had a lot of great ones in Dallas and everywhere else. So it was just all over the place. So, when I started really getting into trying to play Lightnin Hopkins style and with my thumb on an acoustic or an electronic, there’s just so many different ways to look at it and you just keep sticking your foot in the water because you don’t know what’s going to happen. But you have to keep trying and have to play every day.

On memories of Dusty Hill – Well, yeah, when I was a kid, there used to be a band (with) his big brother was Rocky. He was a great player. Dusty always played bass. There used to be a band in Dallas in the sixties when I was just like fourteen called Lady Wilde and the Warlocks and that was a Rocky and Dusty and they played around Dallas for many, many years, when I was a kid before Dusty got with Billy Gibbons. So, I’ve known them for a long, long time. I used to see him at the State Fair. You go to the State Fair of Texas, when you’re a kid, they let you out of school and take you on a bus and you go to the State Fair. They would have several stages, and you would see Freddie King, or you see Bob Wills or you would see all those famous recording artists just one after another it’s right there, right behind Big Tex. Big Tex is a giant statue of a cowboy. He would talk out of his mouth like five stories tall or something. He had a giant hat and he was at the entrance of the State Fair and he would say, “Howdy Folks, welcome to the State Fair of Texas”. If you remember “DFW”, one of the Vaughan Brothers songs that we did, we had that at the beginning. That was supposed to be Big Tex.

On singing – I just didn’t really care about singing (early in my career). When I was a kid, when I started playing, I had this little kid voice. I was listening to Muddy Waters records and he had Muddy Waters’ voice. I thought that my voice sounded stupid. So I never really started singing until I had to and then it got to the point where (it was like), “Well, you have to sing now”, I was, “Oh, no”, but it was encouraging and it was something to work on and it was a new aspect. I still work at it and struggle with it and but I love to sing,

On the lineup for his Fall touring – I’ve got Jason Corbiere on drums, Billy Horton on the bass, string bass, Billy Pittman on rhythm guitar, I’ve got The Texas Horns, baritone sax, tenor sax, and trumpet for the horns, and I got Mike Flanagan on the B3. I got a horn section with rhythm guitar, string bass, drums, and B3.

On the night he accepted his brother’s induction into the Rock & Roll Hall of Fame- Well, it was great to see everyone and great to be there, but it was bittersweet. I don’t know what you say about losing your little brother. He was my little brother even though he was such a great musician and so popular and everything like that, he was still my little brother. When we would go to school in the morning, taking to the bus stop and I’d have to get him to school and get him back home. So it’s always happy and sad and it’s all things all at once. It was a fun night and it was great to be there with all my buddies and sharing all that, and getting him into the Rock & Roll Hall of Fame. That was nice.

On what comes next – I’m writing songs right now, and I don’t know how long it’ll be. After this tour, probably next year, I’ll start recording. After I do my gigs this year and we see what happens. I’m sure I’m going to go in the studio. So I need to make a studio album next, a new album.