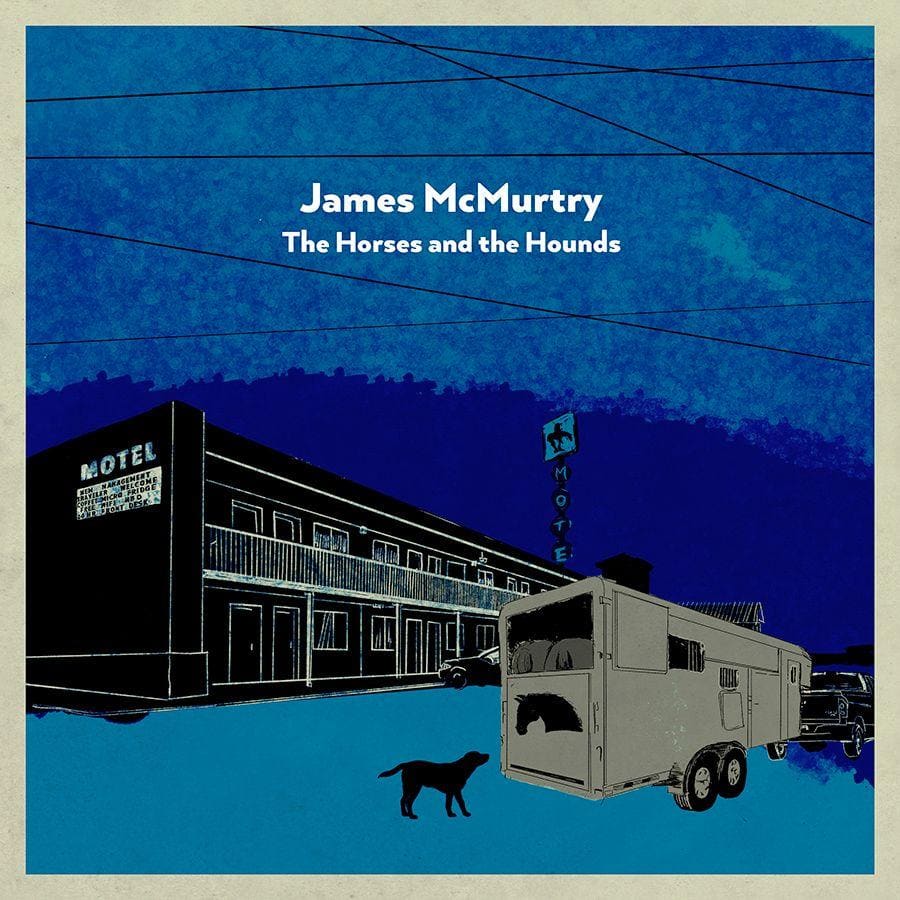 A Conversation with Songwriter/Singer James McMurtry

James McMurtry is one of the great songwriters of his generation. The son of legendary writer Larry McMurtry, James has the unique ability to tell a detailed story with fully developed characters in a simple 3 1/2 minute song. He is about to release his new record, The Horses & The Hounds and sat with me to talk about it.

Please press the PLAY icon below for the MisplacedStraws. com Conversation with James McMurtry –

On the time gap between his last 3 records –The delay, basically, that first long gap was because I didn’t need to make a record because my tour draw held up just fine. When I started making records in 1989, the strategy was we toured to support record sales, hoping we’d sell enough records to live off the royalties. Well, that didn’t happen with me, but over the course of time, I learned a tour cheap, so it’s been the other way around. So I make records, from a commercial standpoint, I make records to support tour dates because if I got a record out and I can get press and you guys want to talk about the record, and when I come to town, people will know I’m there, and they’ll go buy tickets. That came in handy about the time when Napster and Spotify flipped the music business on his head. I was already doing what everybody else was having to learn to do. But anyway, there was a long gap there where we didn’t need a record after “We Can’t Make It Here”. We had a pretty good run, and then it started to tail off. So I made the Complicated Game record (2015), and this record got backed up by the pandemic. We actually tracked this and June of 2019. I spent most of the fall piecemeal doing overdubs because Ross Hogarth, the producer, is pretty busy, and we were pretty busy touring at the time. So we’d have to fly out to LA, do some vocals, fly home, get back in the van, that sort of thing. Finally, we were down to just a few keyboard parts, and we had a session booked at Sunset Sound in LA, and then about a week before we were supposed to go in, California shut down, and then everybody else shut down. So we had to do the keyboard kind of piecemeal over time. I ran one of those sessions out over in Dripping Springs, Texas, with Bukka Allen. And then we had a couple of other guys playing B3 emailing tracks in which takes a while because if you’re not in a room with a player, he sends in a track. you got to call him back, say, “Hey, fix this or do something”. It can take days where it should take an hour is that sort of thing. :54

On his writing process – Well, pieces of songs kind of come. I don’t sit down and write really usually till it’s time to make a record, and I start feeling that pressure. This time was total pressure. When I started out making records, I was young, and I thought I could write in the studio, and I got away with it sometimes. Ross was around then. Hogarth was John Mellencamp’s engineer when I met him. So he recorded and mix my first two records. The second one was pretty much I went in (with) seven songs kind of half baked and finished them in the studio with the band on the clock. You can do that when you’re 29. Well, Ross called up, I guess early 2019 said, “Look, we’ve been messing around with this for a while, and I can get a session that Groove Masters”, which is Jackson Brown’s place, “But we have this one window of time we have to hit. Otherwise, it’s booked up. So we’re gonna book that time, and you’re gonna write the songs. I know you’ll do it”. He said that. I turned into the dog from the Jetsons, “Ruh Roh!”, but I got it done, barely. I was writing in a Roadway Inn in Culver City, which is where we stayed for the tracking session. The locals call it Roadkill Inn because there was a hostage event where the SWAT team shot some guy through an upstairs window. I live in a downstairs room, and it wasn’t hunted or anything, but it’s kind of like going back to the old days. But sometimes that’s what gets the songs written. It’s like you’re on a school bus getting your homework done. 3:23

On the political themes of his writing – I started that song under (Bill) Clinton. The first lines that I wrote for “We Can’t Make It Here” were during the Clinton administration. What the narrator really rails about is outsourcing. But I didn’t finish it till the Bush administration was. Bush didn’t do anything different because his buddies were getting just as rich off the outsourcing as Clinton’s were. But it came out during the Bush administration so everybody thought it was specifically an anti-Bush song. I didn’t mind that much because I wasn’t any fan of little George…I didn’t steer anywhere (on this record). I make a record out of whatever song got finished in time to make a record. If it doesn’t happen to be political, then it’s not going to be a political record…Sometimes (his observations) get into song, but I don’t decide to write a song about a certain topic. I start with a couple of lines and a melody, and if it’s cool, I follow it to its rational conclusion. Sometimes there’ll be a political slant in them that I don’t agree with, but I have to stay in character to write a good song. There’s that song, “Carlisle’s Haul”, about the watermen and griping about government regulations on fisheries. Well, I happen to think we should regulate fisheries if we want to keep them, but I don’t make a living trying to drag fish and crabs out of Bay, and the character in the song does. So if I break character, I’m going to lose a song.5:26

On telling a story in a song –You can do anything in three verses. You got a beginning in the middle and an end, or if you go back to high school English, you got an introduction and a body and a conclusion. It’s sort of the same structure, but you put in put in choruses and bridges now and then to make it lift and make it sing better.

On embracing virtual concerts and dealing with the pandemic –It was the only way I was going to get any income. Early on, people tipped pretty heavy on those first few months. Then end of the fall, the unemployment started running out, so they kind of tailed off with it. They’re still very generous, I appreciate them because what else you going to do? Man, I have started to go back to live stuff every so often and every time I do something happens. I was supposed to restart my Continental Club residency in Austin a month ago, and then Delta started hitting. A lot of my musician friends got sick. They didn’t get deathly ill because they’re all vaccinated, but they got sick. So what we’ve learned about Delta is vaccinated people can transmit it on to each other, and unfortunately, they can transmit it to their young children who are too young to get vaccinated. That’s what’s my fear is. We’re about to see a real nightmare among kids. Now Houston, Texas, has 50 children in ICU and everybody’s running out of beds down here because (Texas Governor Greg) Abbott won’t let municipalities impose mask mandates. There are two restaurants and also tried to just say you can’t come in it without a vax card and a mask and they were immediately threatened with losing their TABC liquor license. That’s what’s going on down here. It’s gotten so political, and Republicans are so desperate to hang on the power that they’re going to let people die. In fact, going to make people die so that they can look meaner than the next guy. Abbott has to look meaner than any Republican, because if he does his job as a governor and as a responsible governor, he’ll get voted out because Republicans can’t do mask mandates or they’re out of character. They’re not real Republicans. That’s what gets thrown at them. Abbott’s in a bind. But he should just take a stand and worry about people, not as damn political career. 9:59

On possible upcoming touring and supporting Jason Isbell’s vaccination/mask requirement -I’ll play doors without that, but I won’t go indoors without it. I’ve cancelled most (touring). Most of that September (run) is gone. The only thing I’m doing is I’m going to Arizona and New Mexico. I found some places out there. The one indoor gig will require vax and mask. Actually, one of the outdoor gigs does, the club Congress in Tucson. Tucson is not like the rest of Arizona. It’s like a little piece of California that broke off and floated out there. In Tuscon you see people wearing mass on the sidewalk. In Phoenix, not so much. We had to pull out a gig in Phoenix, and but somebody found us another venue that would honor our protocol. To reward the brave, we’re going out there and doing that…You can’t (just play in states that are well vaccinated) because you can’t route, you’ll lose money trying to go across with red States. It has to be blanket, it has to be whole country. Suddenly, federal government tries to do anything and they’re restarting the Civil War. It’s all about the government overreach. I don’t understand why the federal government telling the state of Texas what to do is government overreach, but the state of Texas can tell Austin what to do and it’s patriotism. It’s ridiculous. 12:26

On whether he keeps a song vault – I work from a scrap pile on a laptop. Basically, I just scroll through the notes app, and every now and then I’ll find a piece of a song that happens to fit the same rhyme and meter scheme as the last piece of a song I was looking at. Sometimes I can stick them together and get a whole song. That’s great. But, yeah, these songs belong as much to the record as they do to me because we pull the trigger, and suddenly the songs came in. There was a certain amount of adrenaline to it, but I don’t know why these particular songs came in when they did. 14:42

On where to find his virtual concerts – (On my Facebook) and YouTube, and Twitch. I do simultaneous. I go to that Restream thing and they can go out to multiple formats at once. YouTube has a little bit better video and audio than Facebook. Twitch has the best, but I only have about two Twitch viewers, it’s a gaming thing. But the people seem to like Facebook because it’s so much easier to interact. But now one of the things Restream does is the Facebook people and the YouTube people come up on the same screen. They can interact now, but I do recommend to YouTube. 16:26