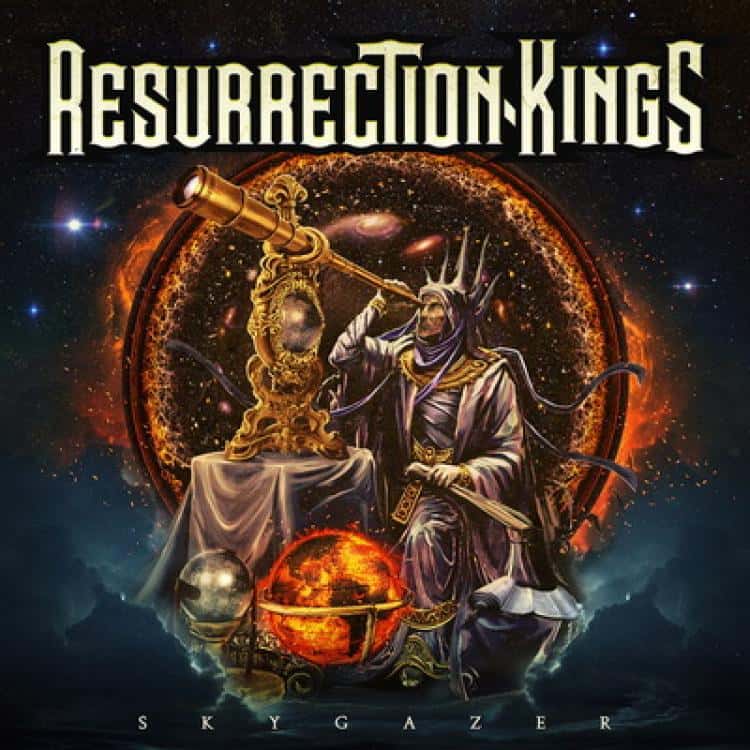 Craig Goldy may be best known for his incredible work with Dio on Dream Evil, Magica, and Master of The Moon but he is also the guitarist and songwriter for Resurrection Saints, featuring fellow Dio alum Vinny Appice as well as vocalist Chas West and producer Alessandro Del Vecchio. They are about to release their sophomore record, Skygazer, and Craig took some time to talk about that record and his relationship with Ronnie James Dio.

Please press the PLAY icon below for the MisplacedStraws.com Conversation with Craig Goldy.

On releasing Skygazer nearly 5 years after the Resurrection Kings debut – Well, it’s just that life has a way of not reading our list of things which might do and other things came up and life happens. It just we wanted to do another one sooner but there were other things that came up. But in a way, everything happens for a reason. So sure, it’s good timing. 1:13

On the band’s writing process –This was the first time that me and Chaz didn’t write together. We normally do. It’s just it was one of those things. It was like a timing thing. Me and Alessandro usually like to write together and then Alessandro will also write with other guys. I like it like this because I’m not in control. A lot of people don’t like being not in control. So it was out of my hands on what songs Frontiers would pick. I have a lot of faith in it. It never steered me wrong with their gut instincts on the kind of songs that Alessandro would write without us, with us, me and Chaz, or without. It was a couple of songs on here that actually started with a drum groove that Vinny set me. Just by listening to the drums, all of a sudden I got inspired and music came from it. So there are a lot of different things and collaborative wise it’s a lot different but it is also the same now. 1:53

On writing apart rather than in the same room –Well, most of the time it’s kind of like this – you got to know the rules in order to break the rules. I was lucky enough to be old school and learn the old school and new school. So I’m kind of a hybrid because it’s much more beneficial for songwriters to be in the same room together. There’s no question about that. However, there are certain guys who once they master that particular, I guess it’s called a paradigm. Then we started doing things like, “Here, I got some ideas”, and I would write some stuff and send MP3 back and forth because a lot of times the people I would be working with were in a different country. So that automatically, with the budget and stuff, that automatically kind of forced us to do it. But at the same time, we knew how to construct a song, almost as if we were in the same room. For instance, I called it Global Hours. I would get up at like four o’clock in the morning and it would be real-time for them. So we would be able to talk to each other either on the phone or Skype or email in real-time. So we kind of did the best we could in kind of recreating that “same room” type of thing. 3:13

On if he’s ever worried that Alessandro’s vision won’t match his – It would make perfect sense if the answer was yes, it would make perfect sense, but actually no, because that first album we did together, we all became close right away. These guys are good people. Alessandro is one of the nicest guys I’ve ever known and the most talented guys I’ve ever known. He’s great at melody, lines and lyrics and song structure. It becomes a collaborative kind of thing because I don’t really want to do everything I can. I can write a song all by myself, lyrics, melody, lines and stuff. I did two songs for a tribute to Ronnie a couple of years back and did everything not because of, “Hey, look what I can do”, I just wanted to be able to tell my story my way. With Alessandro, he’s so multifaceted and I’ve never been disappointed. There’s only been a couple of times when I might change a melody line here or there or change a lyric here and there. Sometimes he’ll come up with the melody lines and I’ll do the lyrics and then he’ll kind of change a line here and there. So it always was a joy the first time and it was a joy the second time. 5:01

On creating riffs – On my phone, I’m running out of space. I have to get a new phone and eventually transfer all of the recordings that I do because there’s all these different projects going on and sometimes people that are friends of mine or sometimes I’ll just be introduced to somebody from the Rock and Roll Fantasy Camp Network, sometimes it’ll be the campers, sometimes it’ll be the talent. I just got into the habit of what’s called a lyric pool, and my girlfriend makes fun of me. But it became a norm for us. We watched the movie and I’ll hear something really clever and I’ll hit pause and write it down or text it to myself or something. She’s like, What are you doing?” Then little by little, she actually has said a couple of things that I said, “Wait a minute, what did you just say?” And I’d write it down? Or if I wake up, I’ll have dreams and I’ll wake up with a riff in my head and I’ll have to sing it into my phone. Sometimes I’ll be watching a movie and it has this really cool, dark chord. I’m like, “what the heck is that?” So I recorded on my phone and then sit and try and figure it out and not actually steal it, but try to figure a way to twist it around. So it’s just I’ve been inspired by not ripped off by. So there’s probably about over two hundred little recordings on my phone. 6:52

On why he left Dio after Dream Evil – Well, one of these days, I’ll say why. Because it’s a very strong story, but I don’t really want to say anything until it gets worded correctly. So I’ll come out with that later. It definitely was not me going, “Oh, OK, great. Thanks, Ronnie. Screw you, I’m going to go do my own thing”. It was not that well. 15:02

On if he ever talked to Ronnie about reforming Dio – This is one of the saddest stories and one of the stories I’m the most proud of combined. When he was diagnosed, he was in Heaven and Hell, for all intents and purposes, Black Sabbath. Then at one point, his doctor looked at him and says, “You can do anything. You’ve got a clean bill of health. You can do whatever you want”. Wendy looked at Ronnie. She says, “What do you want to do?” At that time, Ronnie was back in the twenty thousand seat arenas again, making money, hand over fist. It was amazing. They all thought that he would go do that and just put as much money at the bank as he could for his retirement. He turns around to Wendy and he says, “I want to write with Craig”. Then there we were, we’re starting to write again, I had one little stint because they already paid me and they already paid for visas, he said, “Don’t worry about it. I’ll work on the story. You go do that and I’ll have more to work on when you get back”. When I got back, he was in the hospital. I’ll never forget that he said, “I want to write with Craig”. So there is a song that’s unreleased that eventually will come out at some point. 15:51

On Wendy Dio putting together Dio Disciples –Yes, she was the one. It was actually her and Simon (Wright) because actually for a long time, Ronnie and Simon were like best friends for a long time. Simon actually lived at the house and whatever. Whenever I would do an album with them, he would actually have me move in with him. So we had 24-hour access to each other. Ronnie’s a very private person. So to have a band member live in your house for almost 10 years, that says a lot. They really like each other. They were friends. 17:25

On the brotherhood of Dio band members – I’ve been trying to tell people that that band was run like a family. There’s only one person that still has animosity. That says a lot when everybody else that you work with loves you except for one guy. I’m not saying that because Viv’s a total jerk, I like him, him and I get along fine and I’ve always been friends with Jimmy (Bain) and Vinny. So, yeah, we stay in touch. I went to Vinny’s birthday party at one point and Vivian Campbell was there. We’re just saying, “Hey, how are you doing?” No problem, because everybody is a family. For me, it wasn’t a gig or a job. It was a dream come true. 19:09

On touring and who will play bass live – Covid kind of put the brakes on it now. We’re still moving, but it’s like driving with the emergency brake on. So we’re so nervous that we’re getting there, but not quite there yet. So, I mean, yes, we definitely would love to tour this album. So if we have an opportunity that doesn’t put our lives at jeopardy, yes we will…I would hope that Sean McNabb would be OK because it wasn’t like nobody liked him or we didn’t want it. Just there was something had happened between him and the record company that I’m sure they would rather tell it themselves and have me say. There was definitely no animosity with the band. I love that guy. He’s an awesome, awesome bass player, super, super amazing player. I mean, I didn’t know how good he was until we started playing some shows together. I mean, anybody can record really well, but when you start playing album quality live, you’re a different story. 20:34

A Conversation With Kurt Neumann of BoDeans

A Conversation With Karmen Kinc and Erina Seitllari of Venus 5