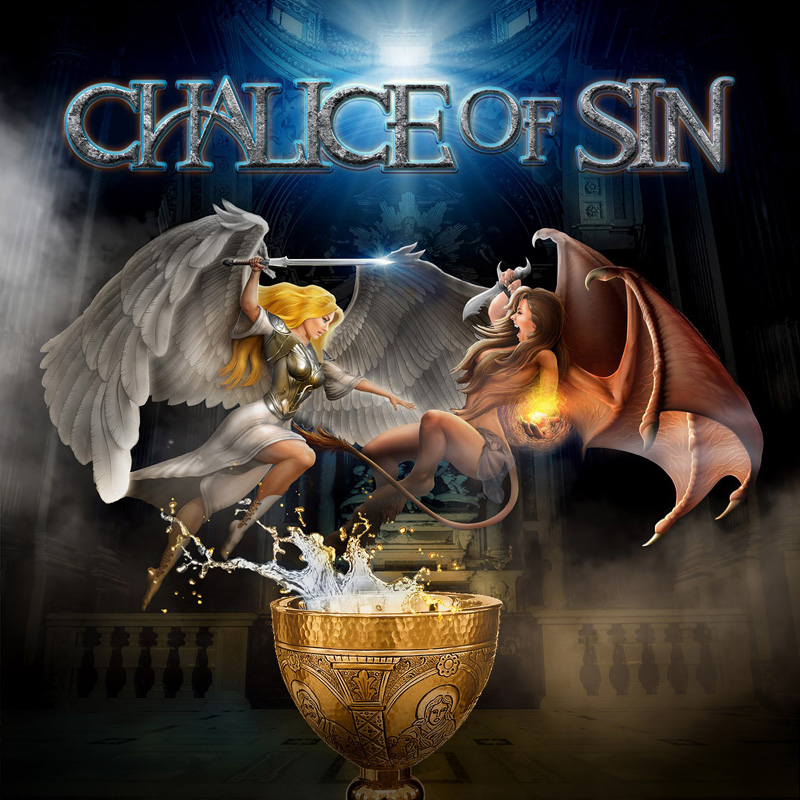 A Conversation With Chalice of Sin Frontman Wade Black

Vocalist Wade Black has been involved with some of the great bands in the metal scene, including Crimson Glory, Leatherwolf, and Seven Witches, since the mid-90s. He’s back with a new band, Chalice of Sin, and has teamed up with the amazing Alessandro Del Vecchio for a traditional metal record with a totally modern sound.

Please press the PLAY icon below for my interview with Chalice of Sin vocalist, Wade Black –

On how Chalice of Sin began –I had met Serafino and we had started shipping back and forth some songs to him. He absolutely loved the songs. That’s when the following meeting happened with Alessandro and the rest is a dream come true. With the lockdown and the pandemic and everything of that nature, the writing process with the record was just really smooth, and the songs almost wrote themselves in a way. :55

On if it was difficult merging his metal style with Alessandro’s more melodic side –No, no, not at all. I think that within yourself, with being a singer, I approach things more of a vocalist way of it, the placement, the arrangement. It really doesn’t make any difference whether it’s prog metal, whether it’s metal, or whatever it is. I can sing you the most beautiful song you’ve ever heard in your entire life and then again, come back with monsters or come back with something else. So, no, not at all. It was a challenge to actually try to grow and try to do something different than a safety net behind you. 2:11

On the difference between joining an established band or starting a new one – Well, I guess within the big picture of the band’s past records and stuff that they want, I want you to try to stick to that style of singing. Of course, you can emulate stuff of that nature to a certain point, but you’ll never be that that person. I think that it’s extremely important to be yourself, to not really have to try to do that to a certain extent. But then again, you need to be creative within your own body, within your own work, in order to feel like you’re part of the band. 3:21

On Chalice of Sin returning to the classic 80s & 90s metal sound –It’s funny that you mention that, everything comes around in a circle. So once again, about the nostalgia, and now the band’s getting back together with original members, and this and that, I think has a lot to that. But I think that, once again, metal will never die. It’ll always be there in some sort of fashion or whatever. We are just super proud that we are one of the bands of Frontiers, that we carry the flag of metal that’s what we are. It’s what we do. It’s not a hobby for us. It’s a lifestyle…I like all kinds of stuff if it’s good. I love the new Lamb of God. I love a lot of the other bands, Machine Head and bands that are progressive, bands that are pushing the limits of and trying to do, something different. I know a lot of bands they’ll stay in that safety net and they’ll do pretty much the same record three or four different times. We want to make a statement We want to do something that we love, that we really stand behind. We’re not out trying to recreate the wheel. This is a killer, killer, killer piece of music that we are surrounded by the best people on the planet that are releasing this. This was Serafino (Perugino), Frontiers Records, and everybody that was involved with this record in the making, the videos and everything and all of the love. We’ve had over one hundred thousand hits total on video plays and streaming and all kind of stuff on this record. So it’s really refreshing and super cool to be back again and to be back again at this stature and I think it’s absolutely wonderful. 5:41

On Florida having a thriving metal scene – A lot of people want to try to move here, they want to try to soak up what we have here. I don’t know. I think it’s just luck. Maybe it might be the sunshine, the way that it shines here in Florida, I don’t know. I think we’ve just really been super lucky of all the treasures that we’ve had here. Of course, Jon Oliva and Savatage, a number of other handfuls of people. This is the metal capital of the world, Tampa, Florida…I guess it’s a friendly scene as long as you get treated right and you’re happy. Being within a band, sometimes, it’s sweet and sour about how things go. Sometimes you’re the booger that sticks to the wall, sometimes you’re not. It’s a rough business. I think that you’re only as good as your next show. You’re only as good as your next record, I truly believe that. At this particular time in my career, I’m just completely humbled and I’m glad to still be out doing it healthy. Within the company that I’m surrounded by right now, I can’t go wrong. 8:43

On Chalice of Sin playing live – Alessandro and I have already spoken about this, we’re in talks right now about signing with a huge production agency and management within Europe and stuff. This is by no means just a project. After we solidify this with everybody, we’re able to start work and get on some festivals and stuff coming up here for 2022. We want to get back out. We want to work, it’s what we love to do. we’re in talks right now with everything and finalizing some contracts and stuff and making that announcement here soon…Absolutely (Alessandro will be part of it), so he said dedicated. The guy is the sweetest person you’ll ever meet, (he) tells me all the time, “If there’s anything that I can do for you. You let me know”. There have been numerous things that I can cross off of my list that I wanted to do within my career. I’m blessed, super blessed. 0:47