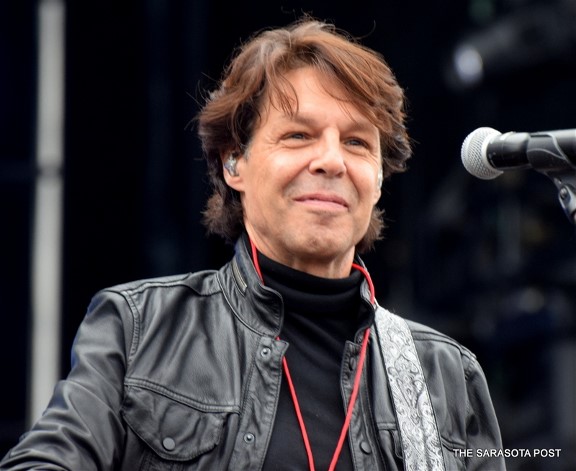 Kasim Sulton is at the heart of two of the biggest stories in music.  The first is the long overdue induction of his longtime collaborator, Todd Rundgren, into the Rock & Roll Hall of Fame.  The second is the tragic passing of legendary songwriter Jim Steinman.  Beginning with Bat Out of Hell, Kasim had a long history of playing on Jim’s classic songs.  Kasim recently took some time to talk about both of these stories, as well as the passing of Utopia keyboardist Ralph Schuckett upcoming plans and more.

Please press the PLAY icon below for the MisplacedStraws.com Conversation with Kasim Sulton –

On whether he was surprised at Todd’s induction – Todd is very vocal about his sort of indifference at that particular institution. But, I don’t want to disparage anyone or anything, but I’m just saying that my experience my experiernce with Todd has been, “Hey, whatever if it happens, it happens, if it doesn’t, I’m fine too”. I think that the fans were very, very pleased at at the induction, and I know Todd’s comment to the press and media  was, “I’m happy for the fans They’ve been waiting a long time for this”…I sent him a congratulatory email but I have not spoken to him. :56

On how he met Todd – I was kicking around New York City. I was playing piano with a girl by the name of Cherry Vanilla, who was David Bowie’s publicist at Main Man Records. That was David Bowie’s, original record label and management company. I met a bunch of really cool people through Cherry like Michael Kamen, Mick Ronson, Leee Childers, Tony Zanetta. All these kind of underground, behind the scenes, New York people and one of my best friends was someone who was very successful on Staten Island, lived on Staten Island, was  Earl Slick. I just happened to go to his house one night, to take him to the airport and when I walked into  his dad’s house, he said, “You feel like playing bass with Todd Rundgren?”  I said, “I guess, I don’t know for sure. I would imagine that would be fun”, and he said, “Okay, when we get to JFK call, Michael Kamen and up. He will recommend you to Roger Powell, the keyboard player, who is putting together the auditions for the band”. I got to JFK. I think it was like a dime or twenty cents to make a phone call from a payphone at that time, I’m dating myself, and and Michael said, “I didn’t know you were a bass player. I know you as a as a piano player”. I said, “Michael, my main instrument is bass guitar”, he said, “Oh, okay, I’ll recommend you”. So, he recommended me. The next day I’m was on an Adirondack. Trailways bus from Port Authority up to Woodstock, New York, to audition for the band. Todd was coming home from a mopeding trip across India. The next day we ran over some material with myself, Roger, Powell and Willy Wilcox, the drummer and Todd came in the next day and I auditioned for Todd and went home. I didn’t think that I would get the job. I thought that it’s just a really good experience for me to do that. The  day after that, I got a phone call from Roger Powell saying, “Welcome to Utopia”. So that’s how that happened. 2:23

“Can We Still Be Friends”
On whether he thinks Todd will show up and if he will play – Well, I can answer one of those questions. If he shows up, he will play. We are due to be on the road during the Induction ceremony. It’s at the end of October and we are scheduled to be on tour at that time.  I really don’t want to bet t and say I bet he will or that he won’t. I think it’s completely up in the air whether or not he will be able to to attend and if he does I am sure he will perform. 5:00
On his initial thoughts meeing Jim Steinman – I really didn’t know what to make of him to be perfectly honest with you. I thought that that he was very, very talented, he was very, I don’t want to say opinionated, but he knew what he wanted to hear. He knew how he wanted it to sound, and he knew what he wanted the end result to be.  I think that that speaks a lot to his vision on his own music. Jim was a visionary. Prior to 1977, ’78 when the record came out or even when we were doing the record in 1976, who would have thought to put a a play-by-play by Phil Rizzuto in the body of an eight-minute song and in have it have it make complete perfect sense? Now, when we did that, when we recorded that track there was that long section in the in the middle, the groping, for  lack of a better term, the groping section, I didn’t know what was going to happen in there.. Maybe Todd knew because it was producing the record, but I think that myself , Max Weinberg, and Roy Bittan had no clue as to what was going to happen in that section. But Jim knew. Jim knew that they were going to do a play-by-play. By the way, they’re going to get a famous baseball player to call it, who, just as an aside, after the fact didn’t appreciate it. he was a devout Catholic and when he heard his his play-by-play in relation to a teenage boy and girl in the back seat of a car, he was not happy. That’s getting completely off the subject. Jim was really brilliant when it came to doing stuff that was out of the box, outside the norm, it was not what you would expect from a three-minute pop song, and he became, usually, successful by being true his own vision…I worked with Jim many many, many, many times. Very, very closely. Celine Dion, his solo stuff, Pandora’s Box. I did work with him on the Bat Out of Hell, The Musical.  Jim and I remained very, very, very good friends throughout his career. 8:13
“Bat Out Of Hell”
On Jim’s legacy – I think that Jim occupies a pretty special place in the annals of songwriters. I think he’s one of the top handful,  half dozen or a dozen. I don’t know how many, but he had a huge amount of success with his material and took a slew of artists like Barry Manilow, like Air Supply, like Bonnie Tyler, like Meat Loaf, Celine Dion. There is there is some statistics that Jim falls in, a very special place in terms of success and records sold and chart position of song writers. I don’t think that there’s a lot people that enjoy, that same success that Jim has had. 12:05
On the passing of Utopia keyboardist Ralph Schuckett – We lost Ralph at the beginning of April. I worked with Ralph pretty closely on a few projects over the years. Ralph and I, while we were not like bosom buddies, Ralph was always extremely kind and generous with his time with me. Brilliant musician, arranger, producer, songwriter. He is missed by a  number of people, touched a lot of people’s lives and he will be sorely missed. As a matter of fact,  I just got an email about a memorial service for him at the beginning of June, a Zoom Memorial that probably about fifty people going to be on it and I’m lucky enough to be included in that, but Ralph was a doll.  I loved every second that I worked with and I loved working. 13:29
Follow Kasim Sulton –
Facebook | Official | Twitter
Share. Facebook Twitter Tumblr Email