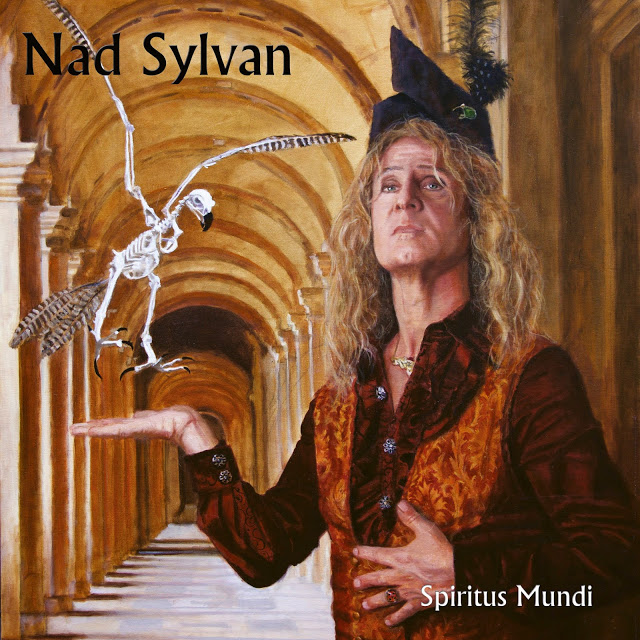 A Conversation with Vocalist Nad Sylvan

If you are a fan of early Genesis then you undoubtedly know the name Nad Sylvan  NAd has been the frontman for ex-Genesis guitarist Steve Hackett’s Genesis Revisited project for nearly a decade.  During that time, Nad has also continued to release solo records, including his latest Spiritus Mundi which sees him interpreting the words of poet William Butler Yeats and setting them to music. Nad recently took some time to talk about this project and his career.

Please press the PLAY icon below for the MisplacedStraws.com Conversation with Steve Hackett –

On what led him to the works of Yeats for this project – There is a small hint on the Regal Bastard album. If you take a close look at the very last track, which is a bonus track, called “The Lake Isle of Innisfree”, lyrics by William Butler Yeats.  That was Andrew Laitres who contacted me and asked if I would be interested to track my voice on a solo record of his. So I did, and I heard the final result and I was really impressed with what I heard, the mixing, the production, and everything. I thought, well, you know, I had one track as a bonus track on the album that I thought I could have another one. One more. So I asked him if he would be OK with me using this track as a bonus track. And yes, he was very keen to do that. So it ended up that. After I’ve done the trilogy, I thought, OK, what do I do now? And I just thought of Andrew and I thought, “Why don’t we set a whole album to music with Yeats’ poems?” I usually continue where I left off on the previous record, I just continue whatever. The last track will always give you a small hint of what’s going to happen next. It’s like giving away a little hint. So I did that and I’m just so pleased with what happened with Spiritus Mundi. It was an effortless collaboration of love and respect for the poems of the Yeats. I could feel the words. That’s why I think my singing probably is stronger now than it was before. It’s just something that started to click. The words were very, very easy to sing and get my emotions behind them. 1:29

On whether the idea of Spiritus Mundi, or World Spirit, set the tone for the record – Yeah, I think it does. The thing is, we set out to make a record that would have a different kind of tone than my previous ones because I wanted to feature my voice more so than ever before. I also want to feature Andrew’s guitar playing. So I went for a more scaled-down production. I mean, it’s very lush at times, but I didn’t want to go prog, but I thought that at least a couple of these tracks would very easily fit into any prog album because usually, there will be a song that is a bit mellow or more acoustic down. So I just thought, “Why not just make a full album with “More Fool Me’s”?  You have to be a Genesis fan to understand that one. 3:53
“The Hawk”
On whether there were poems that didn’t fit the music – No. What happened was that Andrew was the instigator of all this. He had done a ton of demos of Yeats’ poems, and I cherry-picked the ones that I thought would really work my voice so that all the seeds of every song sung are the Andrew’s. Then he sent me very rough sketches. It was just him strumming guitar and his singing. I would structure the song. I would arrange the songs and I would arrange them and I would elaborate on them and paraphrase some of the melodies that I thought might come out a bit more Nad-ish. 5:02
“The Stolen Child”

On whether he drew parallels between Yeats’ words and other lyrics – Not really, I just put my heart behind all the lyrics and I thought this was going to work. You have to understand that my vocal record, my vocal bits of my singing are pretty much set the tone with “The Second Coming” how I wanted to sing, I just felt that it should be sung this way. So that was the first song we recorded for this album, though it didn’t have that intro. It was just the strumming guitar and we started singing, “Turning, and turning in the widening gyre”. And then we added the intro a little bit later and we thought we should have a nice intro. So I actually asked for permission. I even have to pay the license for using Yeats’ voice in the very, very beginning of that. He’s quoting the “The Lake Isle of Innisfree”, it’s his voice reading a bit of “Lake Isle of Innisfree”, that was the song that we ended the previous album. So now you know where I’m going.  So now it’s Yeats doing it, then I continue with speaking, just quoting some of the words from “The Second Coming” before the song actually kicks in. 6:35

On meeting Andrew Laitres – Well, he lives in Vermont, so he came to see, I think, one or two shows with Steve Hacket (Genesis) Revisited definitely in Ridgefield, Connecticut, because that’s where we last met. We met three times. But anyway that was how he first spotted me and thought, “I think it would be nice to have Nad sing on one of my tracks”. So he e-mailed me. I think it was not long after that we were going to do shows in the States and, I can’t really remember now because of all the turns, because it’s a little bit of a blur when you tour so much. But anyway, we sort of hit it off with that song and we started to keep in contact and so our friendship really grew once we started working with this album, very, very steady in contact with him. He’s so happy over this. I really felt for him because he was like just two or three years younger than me, I think is born in1961. When I noticed how clever he was, how skilled he was, he was in the same position as I had always been, I was struggling for about 40 years before Hackett called. I was a very obscure artist from this country.  I felt actually I want to help him because I thought this guy deserves a break. But that’s what really happened. I mean, because he was so good. Well, he needed that break. And so our collaboration was absolutely a labor of love from the word go. 8:16

On how this project may continue –I’ve been thinking about using other poets’ lyrics, but, I’m a lyricist myself and it’s nice to get inspired by these famous poets, no doubt.  I’m very picky with my own lyrics sometimes they work better than other times. But I do see this as a one-off album in a way not that I’m dying to go back to regular prog rock. I feel that I’ve always moved on every time I don’t repeat the same formula. Which I don’t intend to do with the next album either. I might take influences from Spritus Mundi,  maybe some more acoustic guitar playing, and you never know if Andrew and I will do some more work. Today, Anders Wollbeck called me, we’ve done some work in the past, some pretty well-knowns like “When the Music Dies”, that was a cowrite with Anders and he knows that I’m going to start with the new album because I don’t think the next album will come out until maybe 2023. So I started already to write and (Andrew) of course what you want to keep the collaboration going. So he sent me some stuff, “this is what I want you to sing”, “Ok, do I have anything in this at all, what I want to put on my new record?”So that people are very keen to collaborate with me. I’m very, very honored and humbled by the fact that I had people like Tony Levin on three of my albums now.  10:33
“The Cinema Show”
On whether he will change the Peter Gabrial songs on the Seconds Out tour to match the Phil Collins versions – I always tend to sing the songs the way I’ve heard them. I just channel what I’ve heard. I don’t try to change too much. I did put my stamp on the vocals because I’m not Phil or Peter, but I do get to hear ” He always sounds just like Phil. Always sounds just like Peter”. I know what they’re saying, some of the infections may be a bit similar, but it’s the reason why Steve wants to be in this band because he thinks there’s some authenticity there. It’s like my voice belongs to this material and I’m very, again, very humbled that he feels that way and still wants to keep me after, what is it, eight years now? So when it comes to Second’s Out, I will not copy Phil because Phil will go jazz all over the place and he would alter every night he would paraphrase.  I don’t see why I should have to copy him as the music that will be the same, but definitely be a Nad Sylvan take on the songs. 14:09
“More Fool Me”
On the possibility of collaborating with Steve Hackett on a full, non-Genesis record – I would definitely jump at the chance I just haven’t been asked to do that. It would be a fantastic thing if we would make an album together and we can go out and do that and also do Genesis stuff, because people always want to come get the Genesis fix, just like myself, really. But he has not suggested it. I  get a feeling that he wants me to do with Genesis stuff and he should do the solo stuff. But if he were to decide or ask me to do an album with him, of course, I would. I’d be stupid to say no…I love working with Steve. He’s such a mellow, sweet man. It’s never a problem with anything. But he insists on singing his own songs on stage, and rightfully so. It’s his songs. 17:34
Follow Nad Sylvan –
Facebook | Official | Twitter
Share. Facebook Twitter Tumblr Email